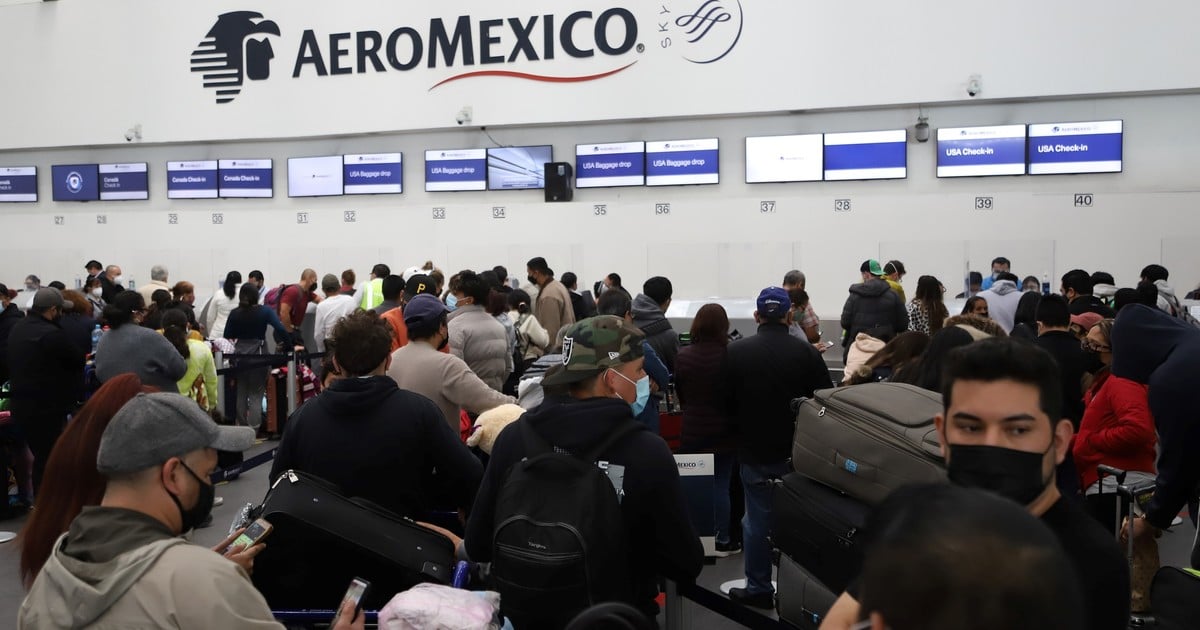 Flight cancellations due to the number of Covid-19 cases among pilots, crew members and other employees of the airline Aeroméxico This weekend caused chaos in various Mexican airports, with more than 7,000 passengers stranded unable to travel.

According to data from the flight tracking service FlightAware, Aeroméxico -the main airline in Mexico- had more than a hundred flights canceled between Thursday and Friday morning, mostly due to lack of crew due to coronavirus cases and contact isolations.

Until Friday it had been confirmed that 87 pilots tested positive for coronavirus in Mexico, while dozens of crew members remained isolated awaiting an analysis.

Long lines of delayed passengers formed in front of the counters of the main airlines, especially at the Mexico City airport.

Many travelers had to spend the night in the place waiting to be able to take off on Saturday, but without any confirmation at the moment.

Aeroméxico informed that “the safety of customers and collaborators will be a priority” and that for this reason adjustments were implemented in operations.

“Protocols will continue to be applied in all operations, in order to avoid a greater impact on the crew and users in general,” the airline explained.

“Flight delay or cancellation is not a decision we make lightly and is always the last resort“the company added in a statement.

Mexico is going through a wave of strong increase in coronavirus infections. In the last 15 days, nationwide the number of positive cases rose 236 percent.

On Friday, the Ministry of Health reported that 28,023 infected were registered in one day, the second highest number so far of the pandemic in Mexico. The total death toll reached 300,101.

In the midst of the rebound in the pandemic, the Federal Commission for the Protection against Sanitary Risks approved the emergency use of molnupiravir on Friday to treat infected patients at risk of serious complications from Covid-19.

Flight cancellations around the world began alongside the advance of the Omicron variant of covid-19, which due to its high contagion spreads faster than the previous ones.

The peaks of cancellations occurred on the weekends of Christmas and New Years, times of the year when large numbers of passengers traditionally travel to visit family or to take vacations. Thousands of flights had to be rescheduled on those dates, mainly in the United States.

The situation has remained and seems to have no end for now. Flightware reported on Friday that in addition to the cancellations in Mexico, another 4,681 flights were suspended or rescheduled worldwide.

With information from AFP and Xinhua