Cases of omicron quadrupled in Brazil in a week: alert in hospitals 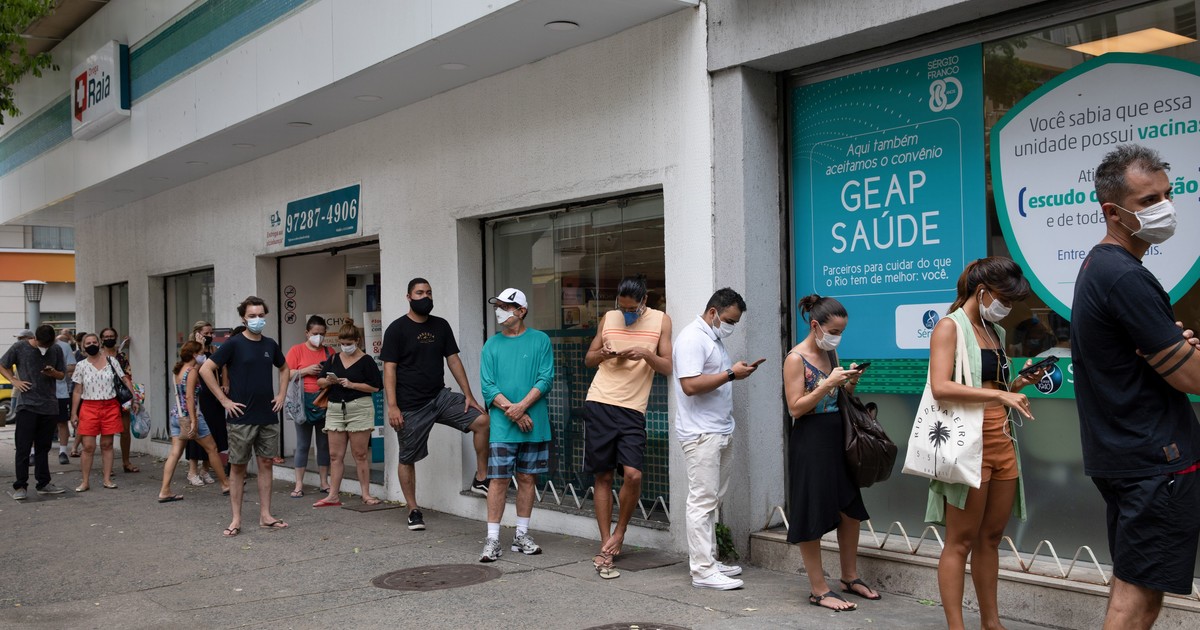 Brazil faces a new wave of Covid-19, in the midst of the advance of the omicron variant, which quadrupled the cases in a week and whose real impact is unknown due to the lack of testing and computer problems for the data count.

The positives in the country, one of the worst hit by the pandemic in the world, shot up from 56,881 reported between December 26 and January 1 to 208,018 last week, according to the National Council of Health Secretaries ( Conass).

The explosion of infected with covid-19 also coincides with H3N2 influenza outbreaks that put the primary care systems of large cities in the country, such as São Paulo and Rio de Janeiro, on the ropes.

But nevertheless, deaths remain at a stable level, over 100 a day, and the abrupt increase in cases is not putting pressure, for the moment, on intensive care units.

A woman waits her turn to take the coronavirus test at a bus station in Brasilia, this Friday. Photo: AFP

“It had been a long time since we had seen so much positive diagnosis. It is a very large number, although it has not been reflected in an expressive increase in income,” infectologist Marcelo Daher, a doctor at the Anápolis Emergency Hospital (state of Goiás, center) and consultant for the Brazilian Society of Infectology.

Hence expect a much greater increase in infections in the coming weeks in a country deeply hit by the pandemic, with almost 620,000 deaths and 22.5 million cases.

Behind this new wave, which only began to be noticed after the Christmas holidays, is the spread of the omicron variant, first detected in South Africa on November 25 and, according to preliminary studies, much more transmissible, but less lethal.

It arrived in Brazil five days later and within a month it became the dominant variant without the Brazilians noticing.

According to the authorities, on December 10 the systems of the Ministry of Health suffered an alleged hacker attack that left the monitoring of the pandemic in the dark.

During the last month, states, municipalities and laboratories were unable to register the data on infections and deaths normally.

Only from this week did the platforms begin to function properly, although they still face difficulties.

“What we see on a day-to-day basis is not being reflected in the disclosed data,” Daher said.

In a note sent to EFE, the Ministry of Health affirmed that the platforms “have already been restored”, but acknowledged that “the data released from December 10” until the restoration of the service “still does not appear” in them.

A woman receives a coronavirus vaccine at a bus station in Rio de Janeiro. Photo: REUTERS

Added to this “blackout” of statistics is the lack of testing. Finding a diagnostic test in São Paulo pharmacies is almost mission impossible.

According to information from the Metropoles portal, the Ministry of Health halved the distribution of tests for states and municipalities between November and December, from 5.7 million to 2.7 million.

In this framework, the mayors of 2,100 Brazilian cities requested help from the government of President Jair Bolsonaro, who insists on denying the seriousness of the pandemic, to acquire rapid tests and strengthen primary care.

For his part, Bolsonaro continues with his crusade against the anticovid vaccination of boys between 5 and 11 years old, authorized by the National Health Surveillance Agency (Anvisa) on December 16 and only released by the Government 20 days later.

The president, who is proud not to have been vaccinated, questioned Anvisa’s neutrality and hinted that he was guided by his own interests in giving the green light to childhood immunization.

The tension rose this Saturday with the response of the director of Anvisa, Antonio Barra Torres, in a harsh and unusual open letter in which he invited the head of state to denounce any indication of irregularity or, otherwise, publicly retract.

Despite Bolsonaro’s denial, the Brazilian population, estimated at 213 million people, applied the vaccine without question. 75% received the first dose and 67% already have the full regimen.

The author is a journalist for the EFE agency