The pilot made an emergency landing on the railway tracks 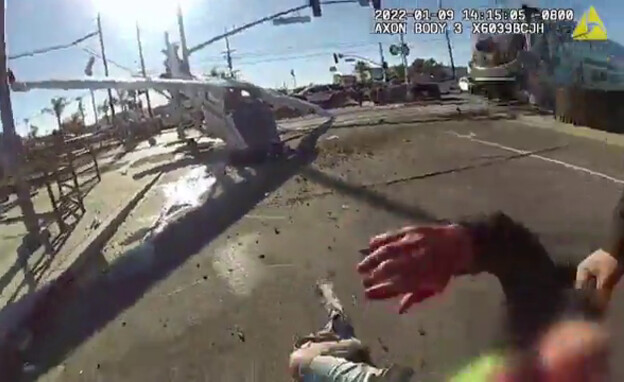 Extraction from the movies: Police in Los Angeles rescued the pilot of a Cessna plane that crashed on a railroad track – seconds before the train crossed the railroad, hitting the plane and tossing its parts in all directions. The body camera of the cops and passersby documented the dramatic moments.

The video shows a number of police officers releasing the pilot from the plane that crashed in the Pakuima neighborhood shortly after taking off. “The plane had a failed takeoff and it landed on the train tracks at a major intersection,” said Luis Jimenez, a 21-year-old who filmed one of the videos. “A few seconds before the hit the cops rescued the pilot, and a piece of the plane almost hit me.”

According to local media reports, the pilot suffered only cuts and bruises and his condition will show. None of the train passengers were injured. The official Twitter account of the local police congratulated the policemen and wrote that they “demonstrated heroism and prompt action and saved the pilot’s life”.