Visit to the beleaguered Austrian blue helmets in Lebanon 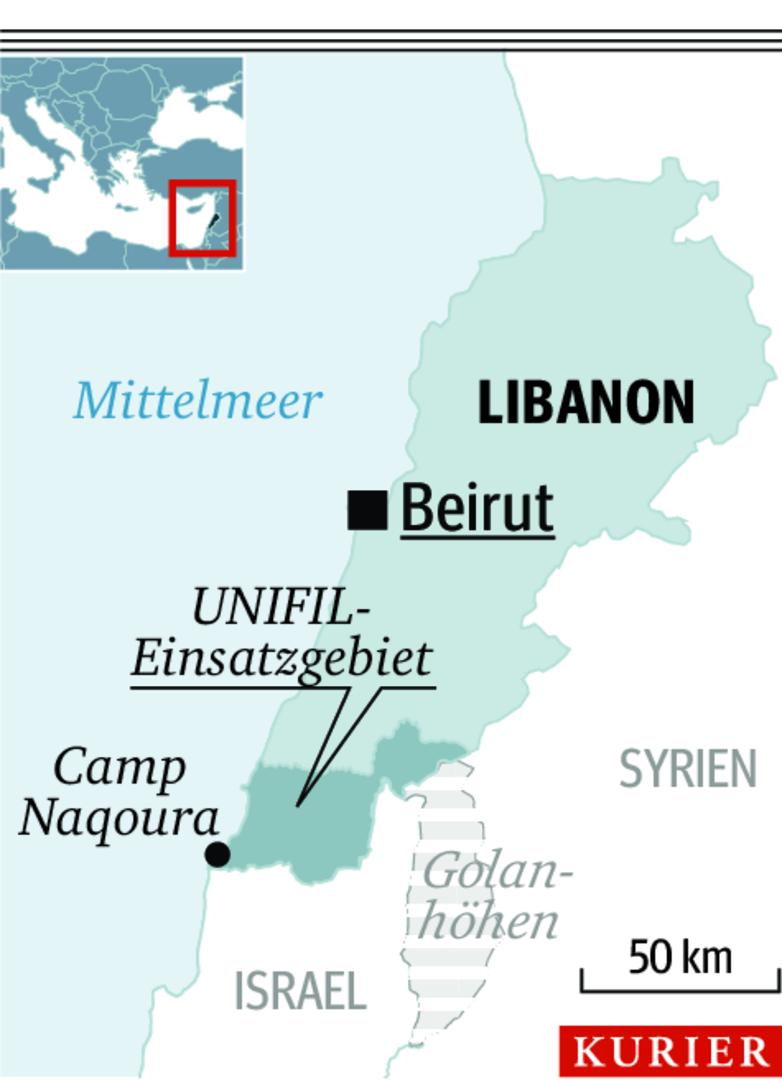 Foreign Minister Schallenberg was informed on the spot about the explosive situation in the cedar state, in which the radical Hezbollah militia is becoming increasingly powerful.

“The situation is rocking more and more. At the beginning there are 15 to 20 people, but they quickly increase. Suddenly you are confronted with up to 200 people, ”says Lieutenant Colonel Walter Lidy, commander of the 176 Austrian blue helmets in Lebanon. While he greets Foreign Minister Alexander Schallenberg at Camp Naqoura, the waves of the surf can be heard outside. The troubled sea symbolizes the situation in Lebanon, where crisis has followed crisis for years.

This is also reflected in the deployment of the peacekeeping forces. According to Lidy, the soldiers of the UN mission UNIFIL are being stopped more and more often by aggressive villagers on patrols. Theoretically, the soldiers have freedom of movement in their area of ​​responsibility (see graphic), in reality there are places that have become a restricted zone for the blue helmets. If you drive too close, stones will fly.

State within the state

“If you try to enforce the freedom of movement that is actually guaranteed, the first shot is not far,” says the lieutenant colonel. One reason for this could be that UN Secretary General Antonio Guterres recently criticized the Shiite Hezbollah for its power politics. Nevertheless, the mandate to monitor the ceasefire between Israel and Lebanon is still feasible. Talks between the two countries take place every six weeks under UN mediation.

The condition of the Lebanese army is a headache, as it is suffering massively from the country’s many crises, for example having difficulties paying the soldiers’ wages: “The UN is now supplying the Lebanese armed forces with fuel, food and medicine. 35,000 liters of fuel and food for 27,000 people per month, ”says Lidy.

Meanwhile, Hezbollah, allied with Iran, sees itself as the actual defensive power of Lebanon and is particularly strong in the Shiite-dominated south. More than 100,000 missiles are said to be there. But Hezbollah has long been more than just a militia, has been heavily involved in Lebanese politics – and has been a regional force in Syria since its deployment on the part of Bashar al-Assad. “It is important to ensure that a state with a terrorist organization does not become a terrorist organization with a state,” said Schallenberg in this context.

Just recently, Hezbollah boss Hassan Nasrallah called the Saudi King Salman a terrorist, whose country was responsible for the creation of the terrorist militia “Islamic State”. There has not yet been an answer from Riyadh – but that will not mean anything good for the Lebanese government: In December the information minister had to resign after criticizing the Saudi role in the Yemen war.

Hezbollah as a power factor

Riyadh still has a strong influence on Lebanese politics – but it is dwindling. At the latest when Crown Prince Mohammed bin Salman tried to force the then Prime Minister Saad Hariri to resign in 2017 and failed, the position of Riyadh suffered. At the same time, Iran has increased its influence, supplying oil and gas to the country.

Hezbollah’s harsh demeanor towards Saudi Arabia shows how much its power has grown. The interim government under Prime Minister Najib Mikati, which has existed since September, is not even allowed to meet for the Council of Ministers, as Hezbollah could otherwise assert its blocking minority together with the Shiite Amal party and blow up the cabinet.

Before the government is allowed to work, Hezbollah said, an unpopular judge should first be withdrawn to investigate the failures that led to the devastating explosion at the Beirut port in August 2020. Parliamentary elections are expected to take place again in May – but an end to the political crisis is not expected.