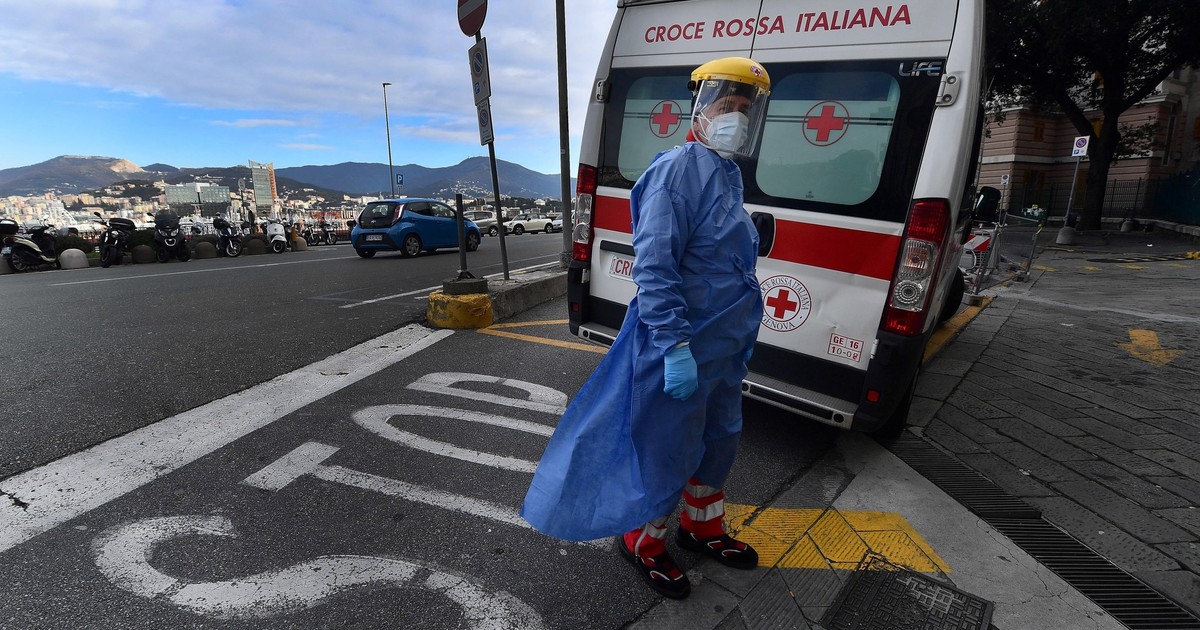 Italy surpassed the level of two million infected active on Monday due to the spread of the omicron variant in the fourth wave of coronavirus. The new scourge struck from last Christmas, when the infected were 600 thousand.

The omicron avalanche has been impressive. Last Thursday, 220 thousand infected per day were reached and the data lost consistency as always at the weekend, when the number of tests dropped by half or less.

In the last week there was also a 34.4% increase in the number of deaths, reaching 1,397. In total, deaths reached 139,265 this Monday since the beginning of the pandemic in Italy, the first country in Europe to be hit by the plague that came from China, in February 2020.

The rapid expansion of the pandemic due to the contagiousness of omicron especially punishes the minority of unvaccinated, who resist the exhortations to appear in the vaccination centers, which on Sunday registered a record of 46.6 million people over 12 years inoculated, equivalent to 86.34% of the total.

The Higher Institute of Health, which advises the government, affirmed that “significant mitigation measures” are necessary or “it will be highly probable” a rapid increase in hospitalizations in the coming weeks in eight of the twenty Italian regions that go towards the “zones red ”, which imply the closure of many activities of social life to stop the spread of the virus and reduce infections.

Quarantines abound in the red zone, which yielded very good results in the larger “close everything” between March and May 2020, and at Christmas and the end of the year 2020.

The president of the Higher Institute of Health, Silvio Busaferro, summarized the current situation as a “Drastic deterioration” of the pandemic.

A coronavirus vaccination center in a theater in Genoa, Italy. Photo: EFE

Busaferro said that it is necessary “to quickly reverse the trend to avoid overload conditions of the health services, already very committed.

The scientist said that “the epidemic is in a delicate phase and in the absence of significant measures in the coming weeks it is highly probable that there will be a further rapid increase in cases and hospitalizations.”

Virologist Ilaria Capua, popular for her interventions on television, said that “omicron is a different virus compared to Alpha or Delta, two variants that preceded it.”

“That is why it escapes part of the immune response. I think we will have to live with Omicron for many years ”, said the scientist. “It is becoming a new serotype of Sars-Cov-2, which makes it an alternative to the original stock in Wuhan, the Chinese city where the pandemic was born.”

In the first, very harsh phases of the pandemic, more than four thousand patients were admitted to intensive care beds in 2020. Now, the barrier that vaccines form have reduced the number of seriously ill to 1,595, the majority not vaccinated who lack the defenses that the injections provide.

But it is feared that the onslaught of the pandemic, which in Italy registers a shared participation of the Delta variant with omicron, Raise infections to even greater numbers in the next two to three weeks, seriously affecting the health system.

A woman shows the health pass before boarding a train at Termini station, in Rome, this Monday. Photo: REUTERS

The day was especially agitated by the schools reopening amid heated discussions about the timing of the measure.

The authorities of two regions, Campania (Naples) and Sicily (Palermo), decided to extend the winter holidays in their jurisdictions until the end of the month, citing the large number of students absent due to being infected or in quarantine.

Two thousand principals of primary schools and secondary schools across the country signed a message calling on the government to keep schools closed until the end of the month.

The president of the association that groups them said that due to the increase in infections and quarantines of students, teachers and professors, “in a week there will be 200 thousand classes that must pass to the Distance Didactics system and it is better to reopen within two or three weeks”.

In Milan, the Manzoni secondary school was occupied by students in protest at the situation that schoolchildren are experiencing, a teacher leader said that “in a week there will be 17,500 infected students” and said in the Lazio region (capital Rome), schools reopened with an average of 15 teachers absent due to Covid in the 700 secondary schools in the region.

The government last week made it compulsory to vaccinate those over 50 years of age and gave them until February 15.

As of that date, those who are not vaccinated will pay fines of up to a thousand euros for each violation and practically all social activities will be closed, even for work.

This Monday a new reinforced Health Pass came into force that excludes the unvaccinated from numerous social activities and from using public transport, especially urban, which prevents them from going to work. In addition, they will not be able to carry out their work tasks without the Pass.

Until now they could use a base document that allowed them to work if they presented a 48-hour antigen control.

The continuing worsening of the pandemic produces backlash in the rest of the hospital medical activity. Already in the first phase, starting in February 2020, the need to care for Covid patients led to a serious displacement of other diseases in the health system.

The president of the Italian Society of Surgery, Francesco Basile, estimated that around 400 thousand surgeries were postponed.

A woman receives the Covid vaccine at a center inside the Termini train station in Rome. Photo: REUTERS

Thus there was an aggravation of tumor pathologies that “frequently arrived in the following months to hospitals impossible to operate.”

Now the phenomenon is being reiterated, delaying the diagnosis of tumors and hospitalization.

“The need for hospitals to expand spaces in favor of the fight against Covid is making it impossible to operate on patients with tumors because there is no availability of places in intensive care rooms for the postoperative period,” said Basile.

There are already tumor pathologies that arrive late to the hospital because they are inoperable. The Italian Society of Surgery raised “the alarm at the dramatic reduction in ordinary surgeries in hospitals.”

Basile pointed out that in several regions the number of surgical interventions has decreased by between 50% and 80%.

The president of the Italian society of surgery prepares a request to the Ministry of Health to establish a differentiated system in hospitals that do not paralyze the activity of sectors dedicated to other diseases.

The surgeon Basile indicated the demand to recover the staff of nurses and anesthesiologists who have gone to the wards dedicated to the pandemic, where the number of infected is growing conspicuously.

“This is an urgent matter because we must now correct this distortion that can lead to excessively aggravate the health of surgical patients in Italy,” warned Basile.