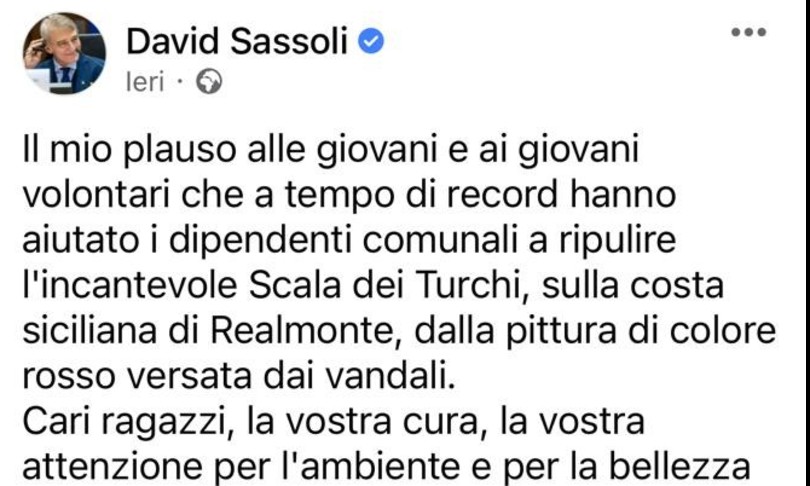 The last three Facebook posts by David Sassoli, the president of the European Parliament who died last night, are dedicated to Sicily and its civil ‘heroes’: Accursio Miraglia, trade unionist killed by the mafia; Piersanti Mattarella, former president of the Sicilian Region who fell under the lead of Cosa Nostra, and, finally, the Sicilian volunteers who in recent days have cleaned up the Scala dei Turchi, a white marl cliff located in the Agrigento area, which the vandals had damaged .

“Accursio Miraglia, Sicilian from Sciacca – reads the first post, dated January 4th – sets up a salted fish industry. Then a representation of iron and metals, a jewelery shop, is administrator of the city theater and finally president of the hospital . Every evening, he teaches laborers and illiterates to read and write. He distributes a large part of the earnings to orphans and the poor. A Catholic tenaciously committed to social issues, a Communist, at first an entrepreneur and then the architect of the first Chamber of Labor, he believes in an honest and supportive Sicily, on the side of those in need ….Miraglia is shot dead one evening outside the door of his house. His story inspires Sciascia in ‘The day of the owl’. It is January 4th, 1947. A remote, distant day. Yet in Sciacca still today, when you mention his name, the old farmers cry for him “.

Piersanti Mattarella, Sassoli wrote in the post of 6 January last, was “committed against the mafia, and deeply wanted to renew Sicilian political life: he was killed for his tenacious will. In this famous, terrible image, his brother Sergio, later elected President of the Italian Republic, tried to help him on that painful January 6 in Palermo in 1980, in the central via Libertà. An ignoble, terrible crime, on which full clarity must be made: it is not acceptable for crimes to exist unpunished! ”

“My applause – reads the post, published at 7.10 yesterday and accompanied by a photo of the volunteers – to the young and young volunteers who in record time helped municipal employees to clean up the enchanting Scala dei Turchi, on the Sicilian coast of Realmonte, from the red paint poured by the vandals. Dear guys, your care, your attention to the environment and to beauty is a credit to Sicily, Italy and the whole world: VERY GOOD! “. ()