Schallenberg in refugee camp: “The situation is heartbreaking” 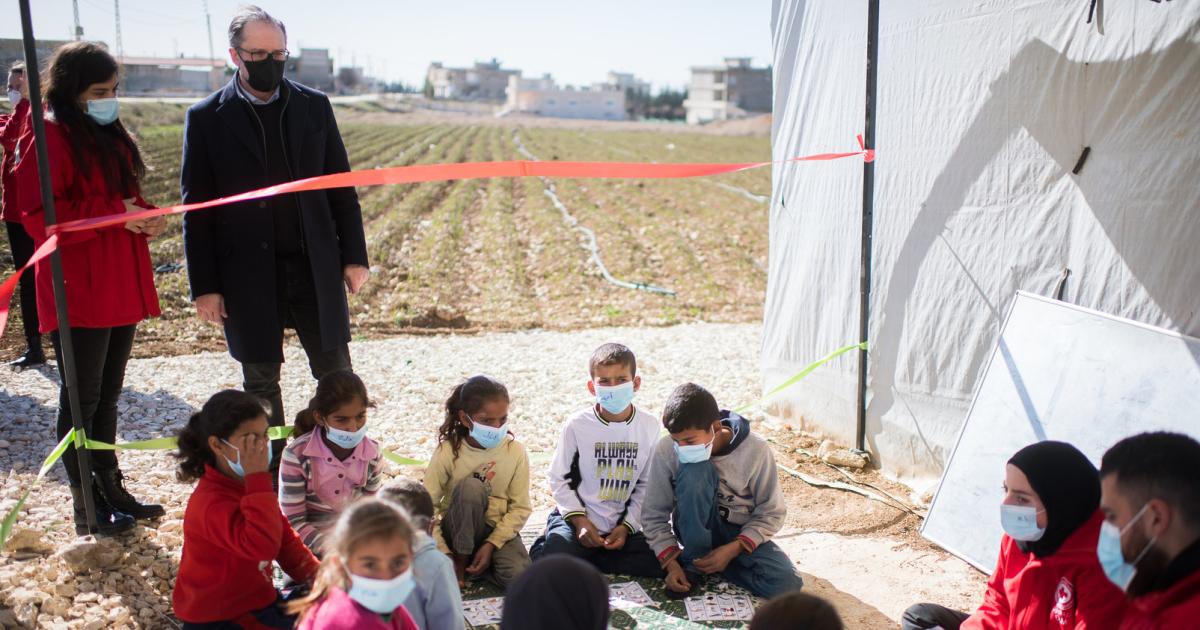 Hundreds of thousands of Syrians have found protection in Lebanon. You are also supported by Austria, the Foreign Minister was impressed.

Colorful drawings, self-drawn candles and sand glasses adorn the walls of the Patriarch Sfeir School in Zahlé, Lebanon – but their creators have to stay at home. “Corona,” says the director. And yet the lessons for the 147 children continue: “We provide them with tablets so that they do not lose touch during these difficult times.”

Even if these children – unlike many others – have the technical aids, that does not mean that they can always use them. Power outages regularly afflict Lebanon, and it wasn’t until Saturday that the power went out across the country. Then nothing works without a generator.

Like Milad Georges Loius, the father of ten-year-old Eli. He came to Lebanon 25 years ago and worked as a facade painter. Had, because the job situation is currently precarious: Those who still have a job earn starvation wages due to the financial crisis.

It is thanks to Caritas that his son, who is linguistically and motor-impaired, can enjoy education. The Patriarch Sfeir School only cares for handicapped children and tries to “integrate them into society”, as the director says. Depending on their talent, the students receive academic or practical training, for example as cooks or hairdressers.

Foreign Minister Alexander Schallenberg thanks the Caritas employees for their commitment: “The situation in the country is heartbreaking. But the people of Lebanon have friends. We will support you in this crisis, ”he says.

About a third of the 147 children come from Syrian refugee families who live in so-called “unofficial settlements” across the country. The government bans real houses.

And so the refugees build with what they can get: wooden crates, clad with advertising tarpaulin. One of these “facades” shows an advertising banner for a modern housing estate: “89,600 dollars for four to five rooms,” it says.

The accommodation is part of a settlement that is supported by the Austrian Red Cross with sanitary facilities. There are hundreds of such camps in the Bekaa plain alone.

Goats graze in a field, children play with their supervisors. “These families come from Aleppo,” says Simone Mencinger from the Red Cross. Many had to leave their papers with their belongings behind, which makes it impossible to register them now.

One of the refugees spoke to Schallenberg and asked how he could legally come to Austria: “In 2021 we had the second highest number of asylum applications per capita in Europe. A resettlement program is not possible in this situation. ”

The Ministry of Foreign Affairs pumped five million euros into organizations and projects in Lebanon in 2021 – the same amount is expected to flow this year as well. 750,000 euros go to the Red Cross hygiene project.

Of the six million people in Lebanon, at least 1.2 million are refugees from Syria, the number of unreported cases is likely to be a lot higher – according to estimates, it could be up to three million.

How can that work in a country about the size of Carinthia? “Instead of one Lebanese, I can employ ten Syrians – for the same price,” a Beirut university professor told KURIER. Many work in the fields of the Bekaa plain for a wage of two dollars a day.

The Lebanese lira loses dramatically against hard currencies: from Monday to Tuesday alone it was five percent, last year more than one hundred percent.

Around 200,000 people have left Lebanon in the past few years. It is mainly young, educated, middle-class Christians who emigrate to Canada or France. To many, the situation in the country seems too hopeless.