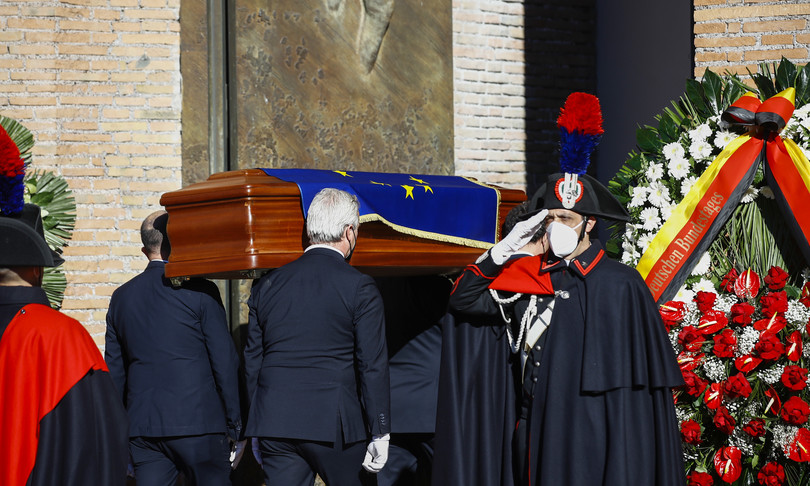 In the Basilica of Santa Maria degli Angeli the coffin of the president of the EU Parliament David Sassoli is wrapped in the flag of the European Union. The body was greeted by the guard of honor of the police and by silence.

In dribs and drabs, a large part of the Italian government arrived in the church. Present, among others, were the ministers Luigi Di Maio, Dario Franceschini, Luciana Lamorgese, Patrizia Bianchi, Andrea Orlando, Lorenzo Guerini. Also participating are the President of the Chamber Roberto Fico and the President of the Senate Maria Elisabetta Alberti Casellati.

The mass for the president of the EU Parliament, who died in Aviano in the night between Monday and last Tuesday, is officiated by the archbishop of Bologna Matteo Zuppi. Between the cardinal and Sassoli there was a solid friendship since childhood when they studied in the same Roman high school, the Virgil. A bond then cemented over the years also by the common Catholic faith.

“Davide was a partisan man and also a man of all because his part was that of the person. For this reason, for him, politics had to be for the common good and democracy that was always inclusive, humanitarian and humanist. This is why he wanted Europe united and with the founding values ​​it has served for its institutions to function “, said Cardinal Matteo Zuppi, adding:”I believe that we all carry his smile in our hearts of Davide. The first way to welcome the other, without complacency, simply, almost shy “.

In the basilica – which has always hosted the official celebrations with the Catholic rite of the Italian state – 300 people are allowed while outside a big screen has been set up for the many citizens gathered to follow the funeral rite.

On the whole, about 600 men from the Rome Police Headquarters are committed to guaranteeing public order: they secured the funeral area and coordinated the operations of the passage of the coffin from the Capitol to the church. The closure of several roads and the removal of waste bins have been ordered. Deployed, as per protocol, given the personalities present also the chosen shooters.

One thought on “Farewell to David Sassoli”