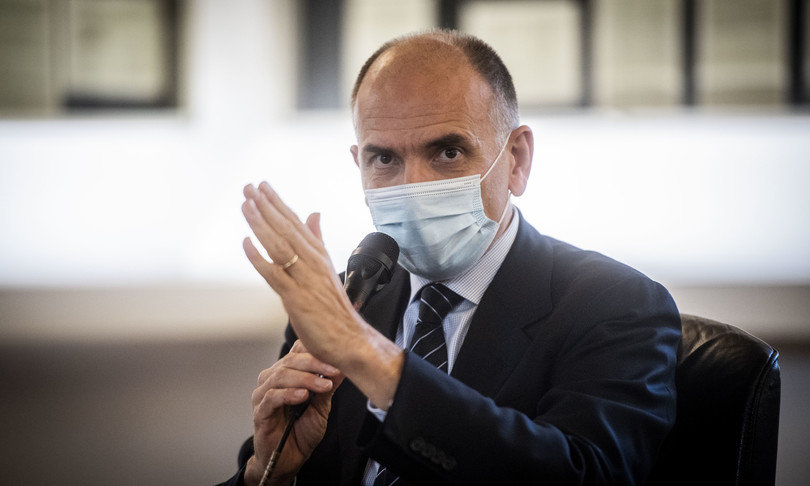 A legislative pact, a closed package that includes election of the Head of State and continuation of the legislature until the natural term. But, above all, that it safeguards the figure of Mario Draghi, essential for completing the NRP and for dealing with the pandemic crisis.

Enrico Letta opens the joint meeting between parliamentary groups and the leadership of the Democratic Party with these indications. The Secretary obtains a mandate that ‘locks up’ the path that will lead him to the vote on January 24th. Letta, in fact, asks that not only the management but also those parliamentary groups that were formed when Matteo Renzi was still seated at the Nazarene to vote and which, since then, have always been difficult to lead.

And the decision to include group leaders in the mandate also seems to respond to this need. In the end, the response was unanimous: a mandate to the secretary and the group leaders “to follow the negotiations for the election of the President of the Republic”. A remote meeting to avoid “letting many people circulate in Italy at a time like this”. And in live streaming, “to ensure transparency in such a delicate moment”.

The meeting opens with a memory of David Sassoli, to whom the secretary acknowledges the merit of having allowed the European Parliament to work on the Next generation Eu when everyone closed. In Sassoli, then, Letta announced that he wanted to dedicate the Nazarene room, the party’s national headquarters, where the management is held.

It is Sassoli, in fact, who represents that “good politics” to which Letta would like to return. This is also why the choice of the center-right to nominate Berlusconi, confirmed at the summit at Villa Grande, deeply “disappointed” the dem. It is true, Letta explained, that “every party leader is divisive”, but none “is as divisive as Silvio Berlusconi”.

Despite this, the Pd secretary is aware of having to continue on the line of dialogue with the other parliamentary forces. “We do not have an absolute majority”, he reminds parliamentarians and members of the management, as if to respond to those who – like the Minister of Culture, Dario Franceschini – are urging a ‘move’ by the party and its allies.

During the debate, Matteo Orfini and Alessandro Alfieri, national coordinator of the Riformista Base, the area that refers to Lorenzo Guerini and Luca Lotti, also ask for a “political action” by the party. The first, which has not officially advanced the hypothesis of the Mattarella bis, underlines: “We must take countermeasures” with respect to the choice of the center-right “which does not mean working on an alternative flag name” but “taking a strong political initiative to tell the center-right: stop”.

The second replies directly to the secretary: “We cannot not play the game, even if we are 15 percent of the big voters”, Alfieri underlines, “We are those later in the polls and we cannot fail to play our role. ”However, the silence of some of the party’s big names should be noted, starting with the area leaders Dario Franceschini and Lorenzo Guerini.

But at this moment Letta doesn’t want to hear about names: “making names today means wanting to burn applications“, he underlines. One name, however, is mentioned during the debate: it is that of the Prime Minister, Mario Draghi. The premise of all is the same:” The premier must be safeguarded, the names must not be burned “.

But in one way or another, it is on the former president of the ECB that the attention is focused. On this, the areas of the Democratic Party move in no particular order: “The most natural thing is that this government continues with its prime minister, with the current prime minister,” says Goffredo Bettini.

A point of view also endorsed by those who, in the past, were critical of some of Bettini’s positions: “For guarantee continuity in government action, we need Draghi at Palazzo Chigi “, says Matteo Orfini. Franco Mirabelli, senator of Area dem – the current that is organized around Dario Franceschini – underlines that” it is not a question of excluding anyone, but it is clear that the figure of Draghi is fundamental to the stability and functionality of this government and it is evident that we do not know – and can we afford not to know? – what would happen if we did without this guide “.

Cesare Damiano it removes the temptation to bring the debate on the figure of the premier: “I would not want to risk burning Draghi, either at the Quirinale or at Palazzo Chigi: I see a sort of weakening of government action in recent weeks, which could lead to a crisis or a sort of paralysis”. On the contrary, according to Stefano Bonaccini, president of the Emilia Romagna Region to which Base Riformista looks, “if the interest of the country coincides with ours, it would be a mistake to say that Draghi is removed from the race at the Quirinale, because if we give the full mandate “to secretary Letta” to negotiate, I would not burn any name and I would be ready to field all that is needed to unite. After that it is right that the government continues for the entire term “.

And, then, the way is to keep the door open to dialogue, to call all the other parties to a legislative pact, “starting with the majority that supports the government”, in order to elect a super partes figure who guarantees everyone, carry out government action and the legislature. “We must work in safety so that the country is able to guarantee, starting from school, public services for make the life of Italians safe and recover and overcome inequalities. At the same time, the PNRR theme is one of the most important issues we face “, recalls the secretary.” That money must be spent and our country must not end up in the dock of the European Union “.

For this reason, “the idea that there are elections in our country today must be put aside”. The profile is that of a President of the Republic who “entrusts the task to whoever wins the elections” and who moves in the wake traced by President Mattarella. “We are positive and optimistic that the attitude of our coalition will allow us to convince everyone to arrive as soon as possible in the election of a high-level and super partes man or woman who will collect the legacy of Sergio Mattarella”.

The path of dialogue with the center-right, however, appears blocked to the minister and head of delegation of the Democratic Party, Andrea Orlando: “In the unfortunate hypothesis in which this intention persists, the way in which to respond will be a political fact to think about already in the next few hours. I believe that the diplomatic offensive is right, the choice to keep on the line of dialogue, but it is a dialogue on which this choice weighs “, says the minister. If Orlando’s skepticism were to be confirmed, the path indicated by Letta is that of confrontation with allies: “The dialogue with our allies is very positive and I want to thank them. The dialogue with our allies, with whom we built the great season of Conte 2, leads us to build the choice on the President of the Republic and that of the elections of 2023 “.

However, time is running out and the start of voting is near. What will be the strategy of the Democratic Party if the ‘stalemate’ with the other political forces continues? “If so go to the first three votes without an agreement we will have to choose whether to vote blank in those three votes or whether to vote a chosen name with our allies. Then we will have to decide how to behave in the face of the choice of the center-right to nominate a political leader as divisive as there can be. Every political leader is divisive, but it is difficult to think of a more divided political leader than him. This is why yesterday’s choice of the center-right disappointed us “.