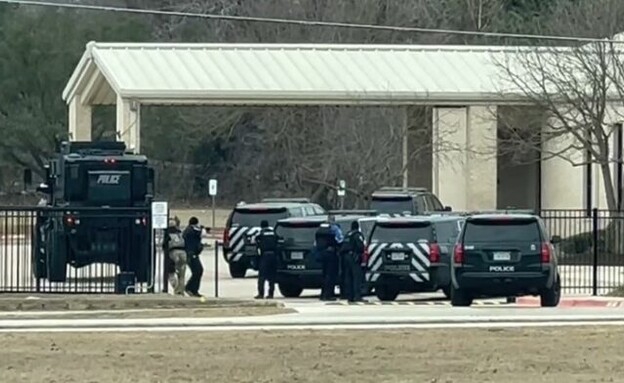 Two boys were arrested last night (Monday) in the UK as part of an investigation into the abduction incident at a synagogue in Texas, in which an gunman broke into the Beit Israel synagogue and abducted four hostages, local police said. The incident ended with no casualties other than the suspect killed, Malik Faisal Akram, 44, British citizen.

A picture of the kidnapper was published on the Fox network – and not officially by the authorities, who recognized that “this is Malik Faisal Akram, a 44-year-old British citizen,” the investigation team said in a statement. “There is currently no information to suggest that anyone else was involved in the incident.” An FBI team is investigating the scene and gathering evidence, along with other bodies.

A man who identified himself as the kidnapper’s brother posted on the Facebook page of the Muslim community in the city of Blackburn in England: “With great sadness I confirm that my brother died in the United States. We are Russians. Can not say much because of FBI investigation. This unfortunate incident. ”

He further claimed that his family member suffered from mental problems, but despite this “we were sure that he would not harm the hostages”. He further wrote: “There was nothing we could say or do to persuade him to surrender. He was shot and killed.” The man who identified himself as his brother added: “Any attack on any human being is wrong and should be condemned.”

Prime Minister Naftali Bennett spoke with Texas Gov. Greg Abbott and thanked him for the determined action of law enforcement in his country that brought the incident to a peaceful conclusion. Bennett also thanked Abbott for his steadfast stand with the Jewish community in Culiwille and Texas in general, and for his fight against anti-Semitism and the boycott movement (the BDS). In addition, the Prime Minister invited the governor to visit Israel.

US President Joe Biden last night referred to the incident and said it was an “act of terrorism”. He spoke with the Attorney General about the incident and added: “We still do not know why he marked the synagogue as a target.” President Biden further said the attacker “obtained his weapon on the street.” “The idea of ​​background checks is critical, but you can’t stop such a thing if someone buys a weapon from someone else on the streets.”

Long hours after the incident began, it became known that the hostages had been released to their homes and the kidnapper was shot to death. It later became clear that the suspect’s intention was apparently to release Afia Sidiki, an al-Qaeda terrorist who is serving an 86-year sentence, from detention. This is a terrorist who is considered one of the most wanted in the world, imprisoned at the Creswell Air Force Base, near Fort Worth.