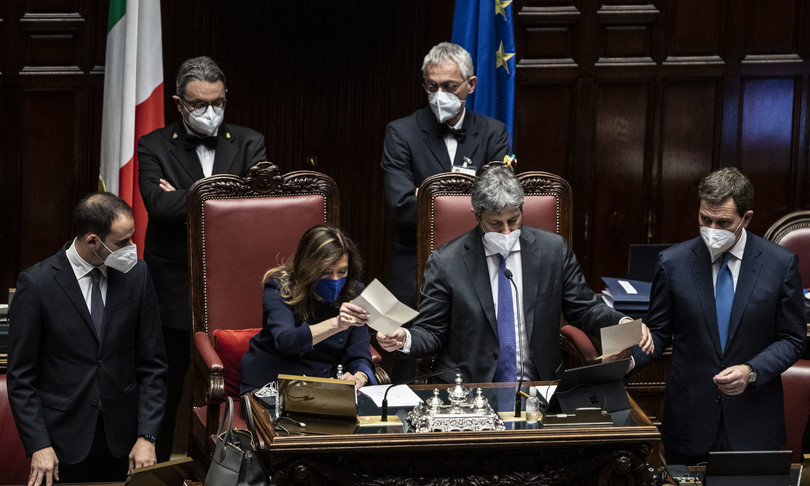 “Frantic immobility”: Ugo Magri’s excellent oxymoron in ‘La Stampa’ captures the synthesis of “all against all” (the newspaper’s opening title) that strangled the election of the next head of state. Magri reflects on one of the few certain data from the fourth day of negotiations and inconclusive votes, now that the quorum has been reduced to an absolute majority of 505 votes: Sergio Mattarella received 166 votes, elicited by the ‘peons’ who do not respect their parties’ indications (M5s and Pd, given that the center-right abstained en masse yesterday) and suggest a re-election.

According to Magri, a long-time quirinalist, given the stance of Salvini and Meloni, it appears to be an implausible hypothesis at the moment, and that “this is what the head of state least wishes.” “Not even Mattarella can stop politics from taking its course,” Magri observes, noting that the term of office ends on February 3, and “it is not even clear who should countersign any decrees on the issue of pandemic at that time.” But, presuming that it ends there, Mattarella’s encore “would validate that democracy in Italy is failing.”

If the center-right carried out the Frattini operation launched by Salvini and Giuseppe Conte yesterday evening, the government and the legislature would fall. Stefano Folli, who speaks of the “crossroads” achieved by the League’s leader in ‘Repubblica.’ According to the editorialist, two paths could be pursued: either Frattini, who would be a “challenge to the Democratic Party” but would also break the 5 stars, which would be unwelcome to Di Maio, and would result in early elections, or the jurist Sabino Cassese, who would be in agreement with the Democratic Party but would face “the hostility of Conte and his companions.” Difficult fork in the road, “All the more difficult, as Folli points out, because the right does not have a clear majority in the courtroom: 441 people abstained. Another legend has been debunked “..

Frattini and Cassese’s names, however, aren’t the only ones floating in the background of the continuing conciliaboli between parties. Today, the center-right could play for the ‘Corriere della sera.’ “As Francesco Verderami writes, Salvini is struggling with the “state of disintegration that emerges in the center-right, where the snipers are ready to hit him along with the candidate” in a fifth vote that “will have political value.” If this is the case, Verderami says, it is unclear why Casellati bombarded the mobile phones of (nearly) all coalition elders with the same simple message all day: ‘You must vote for me.’ And he got what he wanted.”

In short, the name of Senate President is one that the center-right wants to “go to the count,” but it would be difficult to pass in a chamber where the parties are increasingly ungovernable. “The fear of the Chamber is becoming the conditioning factor of this race for the Quirinale,” writes Lina Palmerini in the “Sole 24 ore,” and all the leaders “are frightened of slipping into the huge trap of 1009 voters,” which “approaches panic.” According to Palmerini, Salvini suffers as a result of his “debut on an institutional stage on which he has ascended, raising huge expectations.” However, the issue has been identified “.. It affects Letta and Conte, and the Democrats are so “suspect” that according to team orders, some lawmakers began “racing the period in which colleagues halted in the ballot box: the faster the passage, the more it proved to have left the card blank.”

In the midst of the incomprehensible jumble, there’s still a chance Draghi will figure it out. His phone call to Berlusconi yesterday and his conversation with Tajani, which was covered by almost every newspaper, meant that “It’s still about Draghi,” writes Marco Conti in the ‘Messaggero,’ who sees a “” thaw “Between the Prime Minister and the Knight:” Even if it’s officially claimed that the conversation was merely a wish for a speedy recovery expressed by the Prime Minister, the conversation could in effect constitute an unblocking of the negotiations “.

According to ‘Avvenire,’ for Draghi to climb the Colle, “a lot of land has to be plowed,” and Marco Iasevoli points out that not only is Mattarella “in the background” of the Colle negotiations with the premier, but that “at the moment, between the candidacies taken into consideration also remains that of Casini,” and that “until the end, we cannot rule out two reservations of the institutions capable of challenging the veto Alessandro Sallusti believes that even if Frattini’s candidacy “evaporates” between crossed vetoes, “it will probably finish there: Draghi al Colle, and then it will be his duty to keep the government and the legislature up”.

In a front-page broadcaster, the Draghi theory unleashes ‘the daily fact,’ which has always been against the prime minister. “Salvini returns to Papeete” is the title, and it describes a situation in which the vote is “blocked by the salvinate: Massolo joins the customary Cassese and Frattini.” And he no longer rules out submission to Draghi, who summons B. and welcomes Tajani.” “I witnessed the Prime Minister make discussions to choose the President of the Republic and threaten, through indiscretions never denied to the sympathetic press, to grab his hat and depart if he or anybody he wishes was not elected,” says director Marco Travaglio.

‘Il Foglio,’ on the other hand, sees a “tactical masterpiece” in the moves of the Northern League leader, as director Claudio Cerasa explains “arrived at perhaps the most important appointment of his political career – his first time as a kingmaker in the election of a head of state who, barring surprises, will cross three legislatures – in the state of one who knows full well that, whatever the outcome of the fifth and perhaps decisive vote, there can only be one result capable of delivering a full victory to the current federator of the center-right: yes to Mario Draghi ” “The paradox of paradoxes is to suppose that one can be vetoed, being the advocate of the majority of units who chose Mattarella’s successor, and then stay there, in Palazzo Chigi, shot down for no plausible reason policy,” writes Giuliano Ferrara in the same publication.

The editorial in the ‘Giornale’ by Augusto Minzolini, “Old foxes and tiny shepherds,” is allegorical to suggest the reverse, namely that the premier must remain at Palazzo Chigi. The foxes would be Enrico Letta, who “points to Mario Draghi to go to elections in this way by playing at a distance with a young fox like Giorgia Meloni who would also make a pact with the devil to get the polls,” while the shepherds would be Conte and Salvini, who “Above all, they must be aware that in this game, the sides or sympathies do not count, but only the final result

Instead, ‘La Verità’ pays attention to Elisabetta Belloni’s candidature, reporting alongside Claudio Antonelli on “Conte’s unusual moves to deliver Lady OO7 to the Quirinale.” It’s a “paradox,” he remarks, “given that the former diplomat was dispatched to the Dis to settle the Count bis’ legacy.”