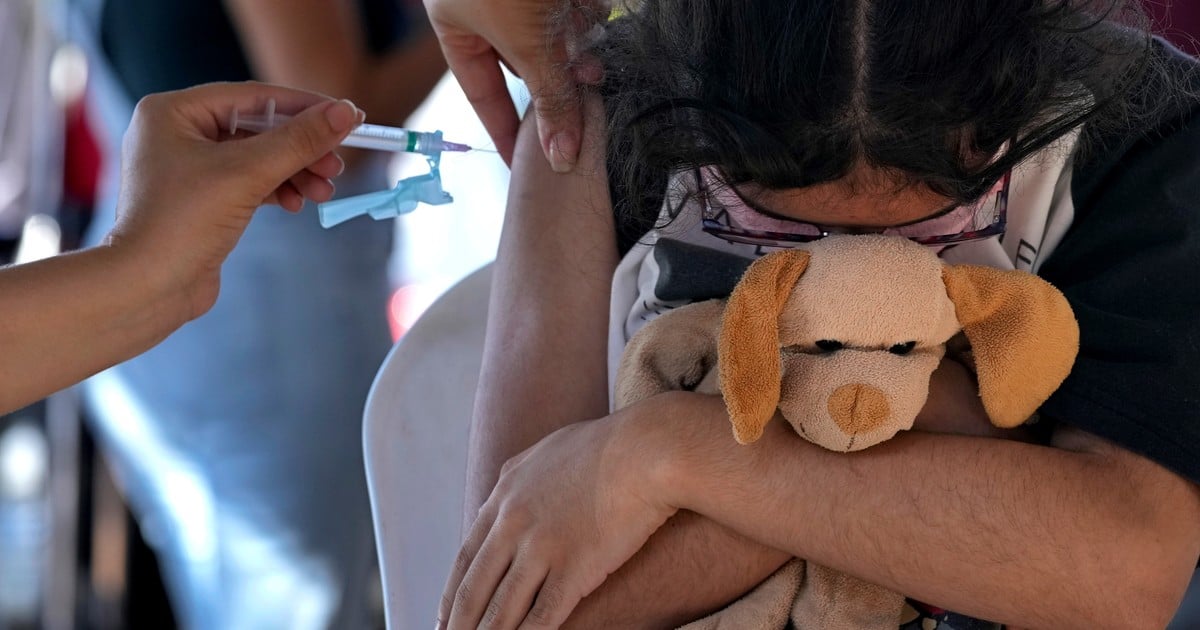 The transmission of the omicron variant caused a new wave of Covid-19 cases in Brazil, and as is happening in other parts of the world, it is mainly affecting the unvaccinated.

As hospitals receive an unstoppable wave of cases, mostly from people who did not receive the injection, the political fight on the vaccination of children under 11 years of age.

Brazil confirmed an average of 162,000 weekly cases until Wednesday, compared to the 3,000 registered at the end of December, the lowest figure in 20 months, according to the online research page Our World in Data.

deaths quintupled to an average of 370 per day compared to the beginning of the month, but much less than last year.

“We see that the people hospitalized are those who were not vaccinated or did not receive the three doses, who have comorbidities,” Dr. Rafaela Ribeiro told The Associated Press in the intensive care unit of her hospital in Maricá, in the suburbs of Rio de Janeiro.

“This time the medical team is more prepared. At first we didn’t know how to treat him. It was chaos,” he recalled.

While cities like Rio rushed to vaccinate their inhabitants -98% of adults have received two doses of the vaccine developed by Jannsen- other parts of the country are behind.

States in the northern region, which encompasses the vast Amazon rainforest, have among the lowest vaccination rates in the country, according to the confederation of state health secretaries.

In the state of Amazonas, the number of infections last week was the highest since the start of the pandemic in 2020, and double last year, when the state health system collapsed.

A queue to get tested for coronavirus in Belo Horizonte, Brazil. Photo: REUTERS

Although hospitalizations and cases of respiratory failure and death have increased in recent weeks, they remain well below last year’s figures.

After a delay in the start of its vaccination campaign, Brazil was placed on a par with many countries and surpassed others. According to Our World in Data, 70% of Brazilians have received two doses of the vaccine, compared to 63% in the United States.

The Minister of Health, Marcelo Queiroga, traveled to Manaus, the capital of Amazonas, over the weekend to promote the vaccination campaign.

On Wednesday, back in Brasilia, he said that hospitals had improved in the last year, when the death toll from Covid-19 exceeded 4,000 daily, and again emphasized the need to get vaccinated.

“It is essential that we increase coverage of the second dose. There are states where coverage is not as extensive as in more populous states,” Queiroga told reporters, adding that children and adolescents should be vaccinated.

The president of Brazil, Jair Bolsonaro, rejects the vaccination of the boys against the coronavirus. Photo: AFP

But the government sends mixed messages about vaccines. President Jair Bolsonaro is openly skeptical, refusing to be vaccinated, opposing the immunization of children and warning of possible side effects.

Tens of millions of vaccines have been given to children around the world with very few cases of serious side effects. In addition, the risks are lower than those of contracting Covid-19, as studies in several countries have shown.

The Ministry of Health included children from five to 11 years old in its vaccination plan on January 6.

But a technical note from the ministry on January 20 included a table according to which vaccines were not safe or effective for treating coronavirus, as was the malaria drug hydroxychloroquine. Tests have amply shown that it is not effective against Covid-19.

Ante la outraged reaction of the experts, the Ministry withdrew the note and issued a new one without the table.

Although this wave of the coronavirus did not cause serious illness or death, the fear of the increase in cases led the authorities to cancel or postpone the Carnival festivities. The world-famous parade in Rio de Janeiro has been postponed until April.

Faced with rising hospitalizations, the ministry kept funding for intensive care beds for another month, it said in a statement.

Of those hospitalized in the state of Rio de Janeiro, 88% did not complete their vaccination, according to the press office of the state health secretary.

Hospital emergency rooms face the highest demand, unlike intensive care units, according to the vice president of the society of infectious disease specialists, Alberto Chebabo.

“Most of the severe cases are among the elderly, particularly those who have not completed their vaccination,” Chebabo said in a video call.

“The probability of hospitalization of an elderly person with an incomplete vaccination schedule is 17 times greater than for those who have two or three doses,” he assured.