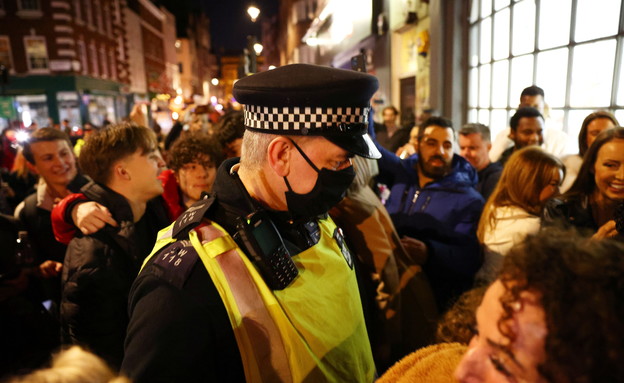 The corona vaccine campaign around the world is gaining momentum and many countries are opening their borders and allowing people to return to restaurants, shops and sporting events after more than a year of restrictions. But the spread of the contagious Delta variant has caused countries to delay the return to routine – and the global death toll from Corona crossed the 4 million people yesterday (Wednesday), according to Johns Hopkins University data.

Now the competition is between the rate of vaccines and the rate of spread of the Delta strain. The number of deaths in the past year and a half from the virus is roughly equal to the number of deaths among all the world wars since 1982, according to estimates by the Peace Institute – Oslo Institute. The death toll in three countries accounts for more than a third of all global deaths – The United States with about 606,000 dead, Brazil with about 527,000 dead and India with 404,000 dead.

It should be noted that in view of the difficulty in accurately monitoring the spread of the virus, especially in developing countries, many experts believe that the global death toll may be significantly higher than the official reported number..

The UK aims to end all types of Corona restrictions on July 19, allowing pubs, restaurants, nightclubs and other venues to reopen. In England, non-essential shops, pubs and restaurants with a capacity limit have already opened in April. Cinemas and sports halls opened in May. Also, the UK has resumed flights abroad, although the isolation rules still apply to the majority of those arriving in the kingdom.

In Italy, outdoor masks have been discontinued since June 28 and the night curfew was lifted on June 21. The service in closed restaurants has been renewed since June 1, after reopening in April. The isolation guidelines for travelers coming from the EU, UK and Israel were removed as early as May.

Japan: Audience entry to the Olympics is questionable

Thailand: The island opened to tourists

The Asian country announced on July 4 that it would allow certain construction projects to resume operations. The country has started an interesting tourist pilot starting on July 1 on the most popular island in the country – Phuket – which is open to all tourists. Over the next four months the state is expected to open more and more sites. Despite this Thailand this week recorded a daily record of 75 dead from Corona.

USA: Reporting – No vaccine certificate will be required

Americans are still considering when to remove entry restrictions for tourists, but the U.S. does not intend to require a vaccine certificate upon entry. On June 15, New York State abolished all restrictions, including shops and gyms. Public transportation and health services still have restrictions. California, Florida, Illinois, New Jersey and Connecticut also eliminated most of the emergency measures. New York City and Los Angeles plan to reopen schools completely from September.

France: Nightlife is back

In France, the means of distance were removed as early as July 6 in the southwestern part of the country after a delay caused by a large number of people infected with the Delta strain. The order to go with masks outside and the national night curfew were lifted in June, and nightclubs are set to reopen starting tomorrow. Cafes, bars and restaurants reopened in June along with the sports halls and casinos. Shops and movie theaters have been open since May.

The Prime Minister of New South Wales in Australia on Wednesday ordered an extension of the week of the closure in Sydney, and warned of a new wave of infections in the highly contagious Delta variant.

Canada: Exemption from vaccination for vaccinators

In Canada, it was decided that citizens and permanent residents who received two doses of vaccine would be exempted from isolation if they returned to Israel as of July 5th..

Colombia: Getting back to routine

In Colombia as of July 15, tourists will no longer have to present a negative test and schooling will resume. As early as June 3, the state approved the holding of most major events such as performances and sporting events with a capacity of 25%.

Germany strives to remove all other social and economic restrictions once the vaccine is available to everyone. This is supposed to happen in August. General travel warnings have been lifted since July, and travelers from low-risk areas can enter the country without the need for isolation since May. In addition, on June 30, a directive was removed that forced companies to allow work from home. The isolation guidelines and the obligation to present a negative inspection at the entrance to the stores were also removed in May for vaccinators and recoverers.

India and Poland: A controlled return to routine

New Delhi’s shops and malls reopened in June, although pubs, gyms, salons, cinemas and parks remained closed. Some of the businesses in the Tamil Nadu region, known for its automotive industry, were allowed to return 50% of the workers. In Bangalore, the capital of the state of Karnataka, businesses were allowed to partially reopen, although a night curfew remained.

In Poland, as early as June, some restrictions on performances, sporting events and churches were lifted and it was approved to admit an audience of up to 50%. In hotels approved up to 75%. Poland reopened shopping malls, sports facilities, hotels and restaurants in May, and the number of people who can enter indoor events was raised to 150 on June 6..

South Korea, which is considered a country that has managed to cope well with the corona, has reported the second largest number in daily infections since the outbreak broke out there. The government has said it will ease social withdrawal measures in July, but the number of cases has risen and authorities in Seoul and surrounding areas have extended restrictions until yesterday. From July, wearing masks outside is no longer required for those who have been vaccinated and tourists who have been vaccinated can apply for an exemption from isolation. Up to 4,000 people can attend concerts and other cultural performances. Sports stadiums can operate at a capacity of 30% to 50%.

Spain: Will the pubs close?

In Spain the re-emergence of the virus in recent weeks has led a number of regions, including Catalonia and Cantabria, to consider imposing restrictions on nightlife and social events. The state abolished the obligation to wear masks outside on June 26, and the closures in May. Travelers who are not from the EU and at low risk of getting infected are allowed to enter without a negative check starting in May, and from the beginning of June anyone who has been vaccinated can enter.

UN Secretary-General Antonio Guterres said the epidemic was still “far from over” and warned of the emergence of more deadly strains that would be resistant to the vaccine and lead to further spread of the virus worldwide. “Vaccines offer a glimmer of hope – But most of the world is still in the shadows, “said Guttrash..

“To implement this plan, “said Guterres,” I call for the establishment of an emergency task force that unites all countries with the ability to produce vaccines, the World Health Organization, the World Vaccine Coalition GAVI And international financial institutions capable of dealing with pharmaceutical companies and other key stakeholders“.‎