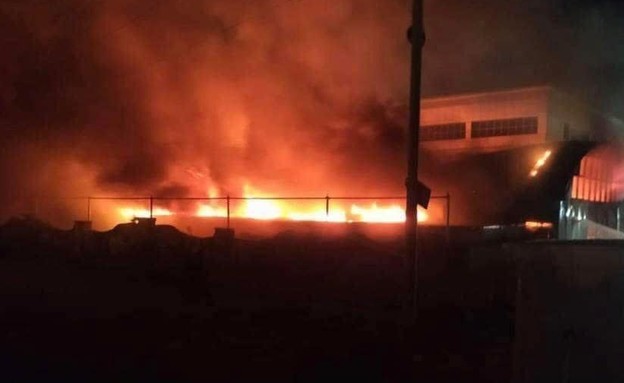 Burning hospital in the heart of Iraq: At least 64 people have been killed and dozens more injured in a fire that broke out last night (Monday) at the al-Hussein Corona Hospital in the city of a-Nasriya, southeast of the capital Baghdad. Documentation from the scene shows crowds gathering at the scene of the incident and worried about the tragedy, alongside the rescue of the injured by the rescue forces. An explosion of an oxygen balloon apparently caused the fire, but there is no official verification yet.

The hospital where the fire broke out contains only 70 beds and most of the victims are Corona patients. According to a spokesman for the district health department, 20 people were rescued during the evacuation from the burning structure – after hundreds of volunteers rushed to rescue those trapped in the flames alongside rescue forces.

Local authorities in Di Carr have declared a state of emergency following the tragic event and Iraqi Prime Minister Mustafa al-Khazmi convened ministers and security officials to examine the circumstances of the fire and its aftermath.

After Ba-Nasriya took control of the fire, many of the country’s citizens arrived at the hospital and protested, pointing the finger of blame at Iraqi leaders. According to them, this is negligence related to corruption in the country: “My God, they burned us,” they declared. Some even called on the prime minister to resign and elected officials to take responsibility for the disaster.

Meanwhile, Parliament Speaker Muhammad al-Halusi wrote on his Twitter account: “The disaster at al-Hussein Hospital is clear proof of a failure to protect the lives of Iraqis. It is time to put an end to this devastating failure. “

The catastrophe of Al-Hussein Hospital is clear evidence of the (failure) to protect the lives of Iraqis, and it is time to put an end to this catastrophic failure, and Parliament will shift today’s session to examine options regarding what happened.

In April, a similar fire broke out at a corona hospital in Baghdad, killing more than 80 people – after the flames quickly spread down the hospital corridors. Following the disaster, the Iraqi prime minister ordered the opening of an investigation and the suspension of the health minister from office, but he finally decided to resign after the harsh criticism.