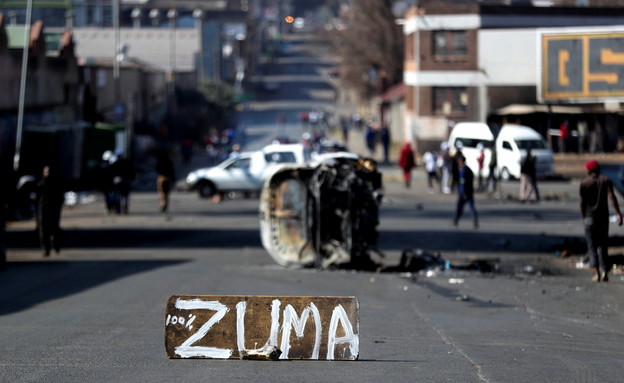 Riots in South Africa, which erupted with the imprisonment of former President Jacob Zuma last week, have spiraled out of control in recent days and the death toll rose today (Wednesday) to 72. Thousands of protesters clashed with police in several cities, and hundreds of looting, arson, shopping and other violence were reported.

In the city of Durban a shopping center caught fire and the shops in it were looted, 10 people were killed during a violent looting raid in a shopping center in Soweto. The South African government has been forced to deploy military forces in a number of hotspots, in order to assist police in failing to deal with the riots. According to police data, so far more than 1,200 people who took part in the riots have been arrested.

The current president, Cyril Ramposa, said it was the worst violence he had seen in South Africa since the 1990s and the end of apartheid. He called on the public to “stop the chaos of fires, roadblocks and the burning of businesses.” The South African government warns that looting and violence could even lead to a shortage of basic food.

“More than 200 malls have been looted in the country,” South African Business Leaders Association boss Bussiswa Abu told Bloomberg News Agency. Alcohol and clothing stores – were completely destroyed, “he added. Among other things, animals were also stolen and even ambulances were attacked by rioters in certain areas.

What started the riots is the entry of President Zuma into prison last week, which caused his supporters to block major roads demanding the release of their leader. At the same time, what actually led to the escalation of violence in the riots are low income levels and record unemployment of 32.6%, which is even higher among young people – 46.3%.

Zuma was convicted of contempt of court after refusing to cooperate with the investigation into corruption cases that occurred throughout his rule. He began serving a 15-month prison sentence last week. Concurrent with the ongoing riots, the state Supreme Court is hearing an appeal he filed demanding his release.

He is suspected of allowing three businessmen close to him to empty the state coffers and influence his policies. The three brothers, citizens of India, fled to Dubai after Zuma’s ouster and they deny the allegations against them. In addition, he is required to investigate a $ 2 billion arms deal from 1999, when he was vice president.

President Rampusa has been accused of delaying the deployment of army and police forces – just 2,500 troops compared to the 70,000 troops he deployed to enforce the closure to curb the spread of the corona last year. In the riots, most of the residents closed in on the house, some set up “protection squads” to protect their neighborhoods and businesses from looting and fire.

#SouthAfrica I have no words… pic.twitter.com/uguJ01d4GK

This unrest is the biggest security challenge President Ramposa has faced since taking office in 2018, after ousting Zuma. The chaos exacerbates the economic crisis in the country, which has already been hit hard by the corona plague.