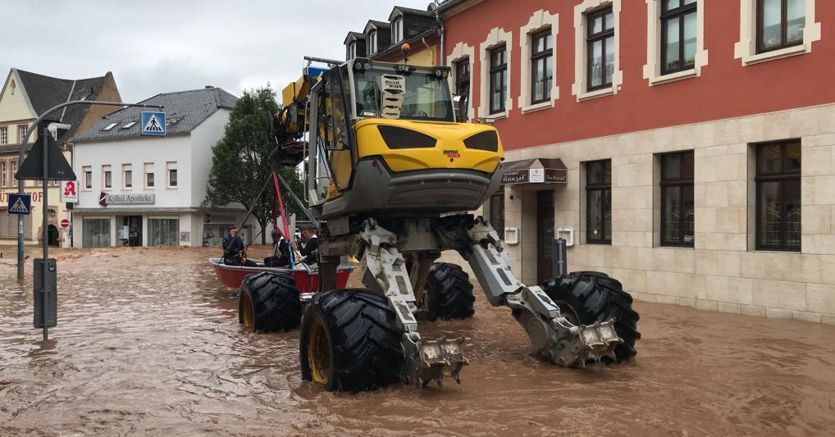 The bad weather toll from the floods that hit Germany has risen to at least 81 dead. This was announced by the police, adding that there are many missing in the affected regions: in particular there are 1300 people in the Ahrweiler region of whom there is no news, possibly due to the suspension of cell phone communications. Electricity supplies were also interrupted for at least 165 thousand people.

West Germany was hit by heavy rains and floods that swept several homes away. Many of the missing people were on the roofs of houses that were engulfed by the raging river in the municipality of Schuld in Rhineland-Palatinate, a spokesman for Cologne police said. What Germany is experiencing is “a catastrophe, one can speak of a tragedy” said Angela Merkel in Washington, speaking on the floods. “I am shocked by the news that comes to me,” she added, expressing condolences for the victims. Immediately after receiving the news of the disaster, the Chancellor said she was “shocked by the catastrophe, expressing through a tweet of her spokesperson Steffen Seibert her condolences for the victims and missing persons and the closeness to their families.

Floods also in Belgium, where at least five victims so far have been ascertained from the wave of bad weather that hit in particular the province of Liège, Wallonia but also some areas of Flanders. Four lifeless bodies were found in Verviers, a city very close to the German border. The Meuse River came out of its banks in Namur, about sixty kilometers south of Brussels. In Liège, the authorities asked the population to evacuate the houses located near the Meuse.

Merkel: “We don’t have numbers yet, many victims”

“I express my pain and my participation for the victims. We do not have the numbers yet, but they will be many ”, said Angela Merkel again speaking in Washington. “There are many who still live moments of trepidation. Everything possible will be done to find the missing, ”he added. The Chancellor thanked all those who are mobilized in these hours to save lives from the floods in the west of the country, citing “the tireless work of the rescuers”. “I want to express my heartfelt thanks for the commitment of the firefighters, the police and the rescuers. We know that in part what they are doing is also very very dangerous ”. Merkel explained that she is in contact with the presidents of the regions involved, Malu Dreyer and Armin Laschet, and that she is in contact with the vice-chancellor Olaf Scholz, and the interior minister Horst Seehofer.

Solidarity with the Germans also came from Brussels: «My thoughts go out to the families of the victims of the devastating floods in Belgium, Germany, Luxembourg and the Netherlands and to those who have lost their homes. The European Union is ready to help, ”European Commission President Ursula von der Leyen wrote on Twitter. “The countries concerned can use the EU civil protection mechanism,” adds von der Leyen. The same was reiterated by the president of the European Parliament, David Sassoli. “I am very worried about the catastrophic floods in Belgium, Germany, Luxembourg and the Netherlands – he tweeted – my thoughts and those of the European Parliament are with the families of the victims and with all those who are still in danger. The EU is at their side and ready to help them ».