Cuban exile organizations call for a military intervention to the US 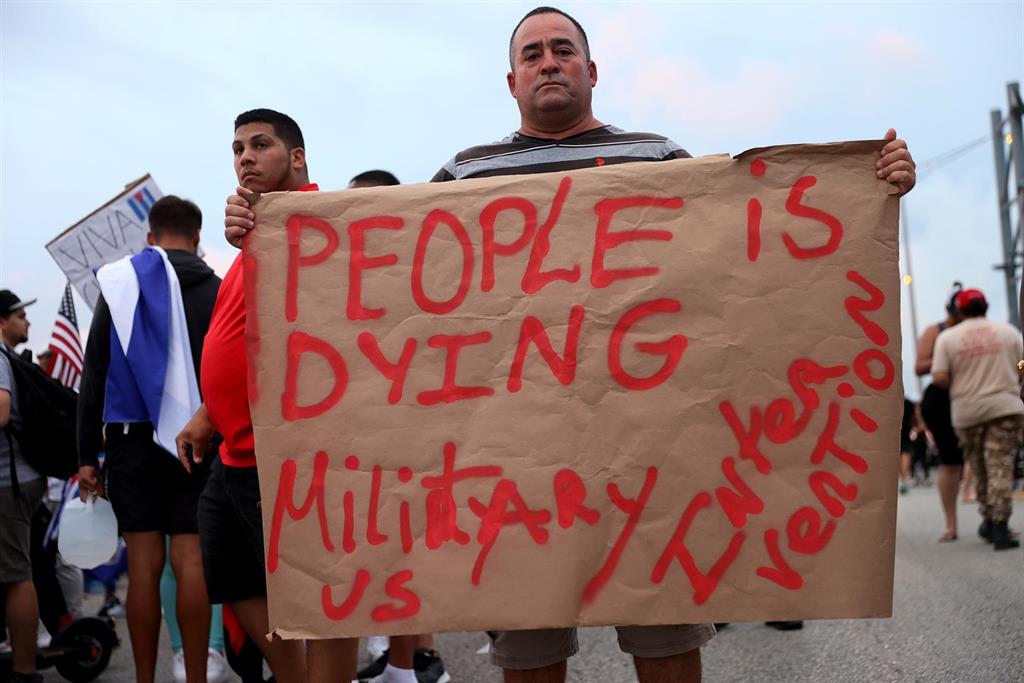 Cuban exile organizations and elected officials in the US city of Miami have asked US President Joe Biden not to rule out military intervention in Cuba to overthrow the island’s government.

Specifically, they call on Biden to have all “options on the table” about Cuba and have recalled that his predecessors, both Republicans and Democrats, intervened in other countries in defense of freedom and Human Rights, reports the Martí Noticias portal.

The declaration has the support of the International Commission for Justice in Cuba, the Hemispheric Front for Freedom and the Assembly of the Cuban Resistance, along with exile leaders and elected officials from Miami.

The mayor of Miami, Francis Suárez, pointed out in the presentation of the declaration, on Friday in Miami, that all “the options have to be on the table” because “unfortunately the Cubans who have been protesting peacefully for six days in the streets themselves alone they will not be able to defeat a regime that represses them with weapons and imprisons them. “

For his part, the coordinator of the Assembly of the Cuban Resistance, Orlando Gutiérrez-Boronat, thanked Biden for his pronouncement on the situation on the island, but added that it is necessary to take “more drastic measures with the dictatorship,” and called for a national strike, which he said is already taking place in some parts of Cuban territory, until the communist system that oppresses Cubans collapses.

Boronat said that the “slogan that is coming out of the young people in Cuba is that with these people there is no future. The corrupt Central Committee of the Communist Party, the Castro family, have to leave power.”

The president of the organization Mothers and Women Anti-Repression for Cuba, MAR for Cuba, Silvia Iriondo, said that as a mother she feels “in her soul” “the massacre of a defenseless people” and has called for a military intervention by the United States in alliance with other nations to end the loss of innocent lives who only want to live in freedom.

Mexican lawyer René Bolio, leader of the International Commission for Justice Cuba, explained that his organization is collecting evidence of crimes against humanity and has called on the entire population to document all crimes, if possible in videos, so that the repressors of the regime are brought to justice. “Crimes against humanity do not expire and will pay for it,” he stressed.

In the presentation of the petition in Miami, the former president of Colombia Álvaro Uribe has also participated by videoconference, who expressed his solidarity with the Cuban people and said that the repression and misery in which the island has been plunged is the fault of the prevailing socialist system.

The former mayor of Miami and current commissioner, Joe Carollo, argued that a military intervention in Cuba is a matter of national security for the United States, since intelligence reports on the island reveal the presence of enemy agents such as Iran, China and Russia. .