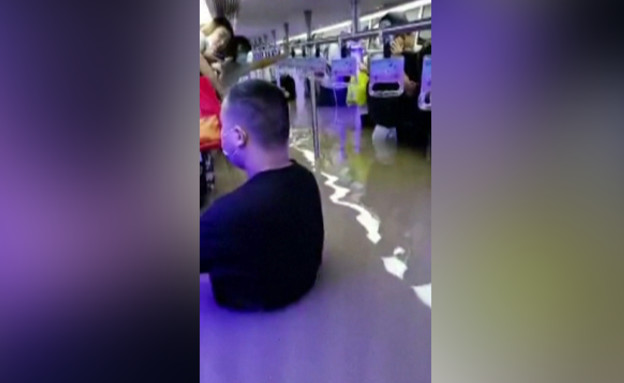 After Europe was hit by deadly floods, now China is also absorbing: Heavy floods hit Hinnan province in the center of the country yesterday (Tuesday). Photos posted on social media in China document flooded subways and cars floating in the water. According to one estimate, 200 mm of rain fell in one hour. So far, 12 deaths have been reported.

Hundreds of people trapped on the subway in the area were reported last night after several water reservoirs overflowed. At present, the condition of the trapped is unknown and there is a fear for human life. “The water reached my chest, I can not speak anymore,” wrote a Chinese surfer from the area who begged for help. After a short time he was rescued.

The videos shared on Chinese social media about the floodings in Henan following the heavy rain really show the severity of the situation. These are some of them. pic.twitter.com/zZMKxvAGAX

BREAKING – Heavy rain pounded the central Chinese province of Henan, bursting the banks of major rivers, flooding the streets of a dozen cities including Zhengzhou and trapping subway passengers waist-high in floodwaters pic.twitter.com/JSxYhz1k5a

It has been raining in the area for 5 days, and it has intensified in the last day. A dam burst and collapsed and led to severe flooding. According to the local Meteorological Service, this is one of the strongest rain events in the area since records began.

At least 10,000 residents of the county were evacuated to shelters because of the heavy rains. At least one person was reported killed and two other residents of Zhengzhou city were declared missing – but the death toll is expected to rise sharply in the coming hours. At least 12 cities have been hit hard by the floods in Hinnan province, where 94 million people live. The stormy weather caused severe disruptions, roadblocks and complex rescues.

The unusual event in China joins the heavy floods in Germany and Belgium – the death toll in Europe has risen to more than 160. In Europe, there are fears of a further increase in the number of victims, as a result of the collapse of other buildings in the area. Rescue teams continue to search for the missing and thousands are left homeless.