Many countries are entering a closure: the Delta variant is hitting the world 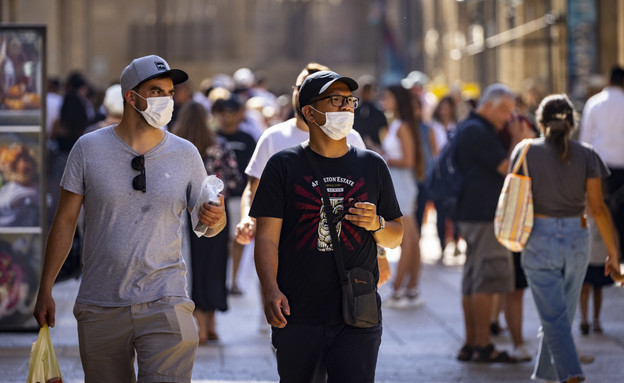 N12 coverage on the Delta variant:

US media reported last night (Wednesday) that 83% of coronated vertebrates in the country carry the variant. Meanwhile, a study published in the US shows that the Johnson & Johnson vaccine is less effective against the Delta compared to its effectiveness against previous strains of The virus. The director general of the World Health Organization said: “The corona plague is a test – and the world has failed.”

“This is a dramatic increase, from 50% of cases in the week of July 4 to date,” said Rochelle Wolansky, director of the Centers for Disease Control and Prevention (CDC) in the country, referring to an increase in the number of Delta carriers in the country. 48% in the last week to an average of 239 deaths per day.

South Africa: In recent days, the state has experienced a jump in the number of patients, and about two weeks ago, an all-time record was set in the daily morbidity rate with more than 22,000 infected. The country is experiencing a violent third wave, but in recent days there has been some decline in the number of verified, and yesterday only about 8,000 new infections were diagnosed.

Restrictions tightened in late June with the spike in morbidity. The great difficulty of dealing with the disease stems from the fact that so far only a few have been vaccinated and the overall immunization rate stands at 2.9%. President Ramposa has made it clear in recent days: “Further steps are needed to stop the disease. We are working to limit social gatherings and try to prevent significant damage to the economy.” Violators of the night closure, risk high fines and can even be sent to prison for up to 6 months.

Iran: On Tuesday, the capital Tehran and its suburbs were closed for a week, with what appears to be a fifth wave in the Islamic Republic. In recent days, an average of 200 deaths have been recorded in Iran every day, and more than 25,000 new infections – with the majority attributed to the Delta variant. As in Israel, these are the highest numbers since April. Recently, the daily morbidity record in the country has also been broken since the plague broke out. For example, more than 27,000 new infections were diagnosed on Tuesday.

Government ministries in Iran have ordered the cancellation of Eid al-Adha events and other religious ceremonies. Cultural events were also canceled and it was decided not to open parks and entertainment sites. In Tehran, a night curfew of vehicles was imposed, from 22:00 to 3:00, in order to prevent citizens outside Tehran from entering the capital. Meanwhile, Iran hopes that the imminent closure and the fact that many of its citizens are not coming to work will also help deal with the plague of many power outages in recent days.

In all, nearly 90,000 people have died from the corona virus in Iran – making it the country hardest hit by the epidemic across the Middle East. Authorities are concerned that fewer and fewer people are adhering to the rules of defense against the corona, wearing fewer masks and not paying attention to social distance. The government calls on citizens to stay at home as much as possible and to reduce the number of trips out to a minimum – to necessity only.

U.S: The US is also experiencing a spike in morbidity in Corona and entering another wave. More than 60,000 new infections were diagnosed on Tuesday – and this is also the highest level of morbidity since last April. The morbidity picture is still rising daily Worldwide, at least 83% of current wave infection in the U.S. is attributed to the Delta variant. Despite this, almost all states in the U.S. have had most restrictions lifted. All states except Hawaii are defined as open – and there are a few isolated restrictions on multi-participant gatherings and some cultural and sporting events.

Oman: After the Sultanate recorded quite high morbidity figures in recent weeks, in what appears to be the third wave in the country, it was decided to impose a full closure on it. The authorities in the country announced that the closure will be imposed for 4 days – throughout the holiday period Eid al-Adha and in some of the days that follow. The explanation for the closure imposed is the fear on the part of the local government of an unusual burden on the health system in the country.

Vietnam: A full closure was imposed in the country after an unusual jump in the number of those infected in it. Until about a month ago, no more than 200 new infections were diagnosed there every day, but since then there has been an alarming increase of thousands of new patients every day, and only yesterday almost 5,500 new infections were diagnosed. Until May, there were only about 400 active patients in the capital Hanoi, while now there are more than 50,000.

Authorities in Vietnam are urging citizens not to leave their homes, and unnecessary traffic between the north and south of the country is banned and vice versa. Among other things, restaurants can only serve food in the open air, and there is no seating in enclosed spaces. In addition, beauty salons, gyms were closed and even bus and train traffic was halted.

Thailand: Authorities imposed a curfew across Bangkok and other parts of the country more than a week ago. At this stage, the curfew is expected to last at least until July 26. The kingdom is experiencing a significant wave of morbidity, and in recent days morbidity records are breaking daily. Yesterday, more than 11,000 new infections were diagnosed there. The previous daily morbidity peak, before the current wave broke out, stood at just over 3,000 infected.

Australia: South Australia entered a one-week closure on Tuesday, following the spread of the Delta variant. Among other things, kindergartens and schools will be closed, citizens will be prohibited from moving away from their homes for a distance of more than 2 km for non-essential needs, visitors from others’ homes will be banned and more.

Authorities are encouraging citizens to go out and exercise near the house, but the rooms and gyms have been closed. Residents were also instructed to wear a mask anywhere outside their homes, even in open areas. All stores that are not designed for essential needs will be closed as well. In the past year Australia has become accustomed to a single single day of infection, but in the last month there has been an increase of hundreds of new patients every day.

also In South Korea A daily record number of infections was reported yesterday, after 1,784 people were diagnosed positive with a corona test in the last 24 hours. In India, Where a total of about 31 million and 200,000 people have been infected so far, it was reported yesterday that 3,998 people died from corona within 24 hours, the highest figure this month.

According to data from the New York Times, In Cyprus, In the Netherlands And in the UK There has been a significant increase in infections in relation to the population in the index of the verified average per day in the last week. In this index – Cyprus is in 8th place in the world by hour with a daily average of 72 verified per 100,000 people, followed by Britain with 70, and the Netherlands immediately behind with 58. Israel is still far below this index – with an average of 11 verified every day per 100,000 people in the last week.

France: Following the decision to lift Corona restrictions and live alongside the virus in the UK, a similar approach is being adopted there as well. As of yesterday, visitors to museums and cinemas will be required to present a vaccine certificate, a certificate that they have recovered or alternatively a negative corona test from the last 72 hours – in an outline reminiscent of the outline of the green label in Israel. France will now consider whether to apply this outline to restaurants, cafes and shopping malls as well.

In France, as in the UK, decisions on relief come on the side of a jump in the number of verified. On Tuesday, French Health Minister Olivia Varane reported 18,000 new nationals in the country – an increase of thousands compared to recent days. “We’ve never seen anything like it,” Varane said, making it clear that the jump in verified numbers is almost entirely attributed to the Delta variant.