Caterina and Petja, an Italian – Ukrainian couple that assist the Bergamo resistance. 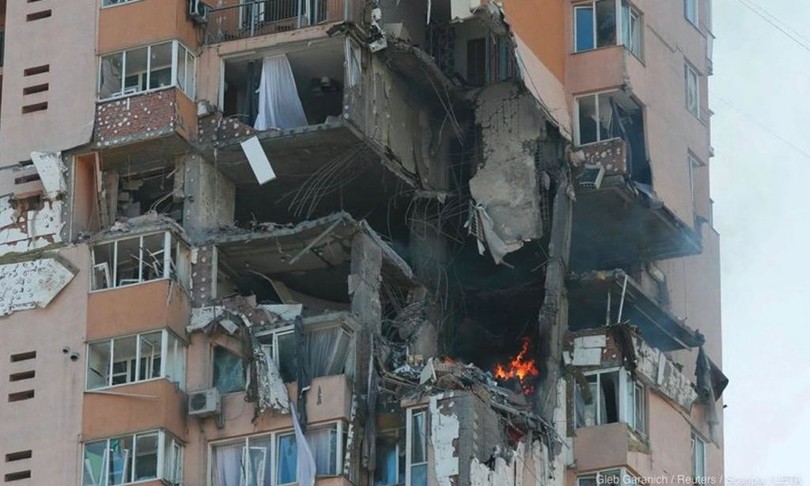 Caterina and Petja, as well as their two three-year-old and 18-month-old girls, narrowly avoided being caught up in the Ukraine conflict. Caterina is 30 years old and comes from Bergamo. Petja is 31 years old and comes from a family from Odessa. They had spent the previous eight years living and working in Kiev, laying the groundwork for their future. Their goals have been overwhelmed by the conflict, but they are fighting for their friends and their people from afar.

“We realized it was time to leave two weeks ago,” Caterina told the AGI over the phone before departing for Milan and taking part in today’s anti-war march. “Petja didn’t want to leave Kiev; it’s his homeland, but he wanted to keep us safe, so we traveled to Bergamo, and he had a return ticket for February 23rd evening.” I was able to persuade him not to take the flight at the last minute. It all started after a couple hours that night.

Caterina and Petja have been “perpetually connected” to computers and mobile phones for three days. They are assisting the “resistance” as well as the remaining pals in town. Five friends who resided in the city center, near sensitive targets, sought sanctuary in their Kiev flat in a residential region in the city’s south-east.

Caterina and Petja’s home became a safe haven for their friends.

“They did it to avoid being forced to live at subway stations that had been transformed into shelters.” But, Caterina writes, “even in a neighborhood like ours, which seemed to have to remain out of the conflict, they began to strike the night of the 24th and 25th of February; the house next ours was destroyed, and it was no longer safe even there.”

The group of buddies dispersed. “They seized our car and drove away, despite the fact that the roads are extremely dangerous right now; we’ve all seen the footage of a Russian tank smashing a civilian car in Kiev!”

Buildings in Kiev have been destroyed by Russian bombs.

Petja works in the restaurant industry and is orchestrating the transfer of empty bottles to the population to make Molotov cocktails, as the authorities have requested, from afar, with suppliers and stores.

“All men enlist in the territorial defense if they are not at home with children and the elderly,” Caterina explains, emphasizing that it is frequently those who “understand Russian without problems.” The child cites this as evidence that Moscow’s portrayal of a divided society in which the Russian-speaking minority is mistreated and opposed to Kiev authorities “does not match to reality.”

Even in Caterina’s private school, where she teaches Italian, there is evidence of amicable coexistence between Russians and Ukrainians. “The scene in which a youngster asks a buddy a question in Ukrainian and the other responds in Russian is fairly common: the Ukrainian coworkers have no trouble chatting in Russian with me, who are more accustomed to it, because we use it even in the family,” says the author.

“I have never been asked to cease speaking Russian,” Caterina says, despite knowing Ukrainian. My colleague, who fled Donetsk, where she taught Ukrainian, in 2014 because she was intimidated by pro-Russian militias, speaks Russian fluently. Ukrainians do not have an issue with Russians; they do, however, have a problem with Putin, since they do not want to live in a dictatorship. However, in Kiev, they have ceased speaking Russian since the day before yesterday: “There are numerous Russians dressed as Ukrainian civilians and troops to cause chaos and who knows what else, and the only way to tell them apart is by their language; they do not speak Ukrainian.”

Caterina and Petja describe a “resisting” metropolis. “Last night should have been a disaster, but instead the people responded with vigor: many men took up arms, and the restaurants where my husband works opened early this morning to feed physicians and volunteers.”

Caterina and Petja have only recently begun to comprehend that there is a future to be rebuilt, having been distracted by war broadcasts and demands for assistance. It’s difficult to imagine returning to Kiev, and “we will have to work” while I’m in Bergamo.

As a result, when they leave for the event in Milan, they also bring their CVs. “If we hadn’t had two tiny children, we definitely would have stayed there to help the people,” Caterina concludes, despite the fact that she is not shown holding a firearm but is seen feeding volunteers and physicians. “The Ukrainians’ reaction is typical of this people; we hope the siege ends soon.”