Demonstrations in Paris against the layout of the local green sign: “Stop the — 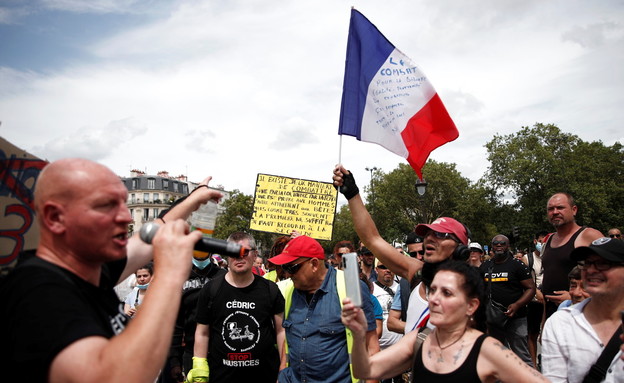 Protests erupted today (Saturday) in central Paris against the government’s intention to pass a “green label” outline that would restrict vaccine refusers from entering public places. Hundreds of protesters gathered near the Eiffel Tower carrying signs – “Freedom for all human beings in the world” and “Stop the vaccine dictatorship”. The police had to shoot tear gas toward demonstrators who confronted policemen.

The government bill for the green label outline is expected to be voted on in parliament soon, and includes measures against vaccine refusers similar to the green label in Israel: a ban on public places and events where more than 50 people gather, such as cafes, restaurants, museums and cinemas – unless they show At the entrance a negative test result of Corona (or a vaccine certificate). Children under the age of 12 will be exempt from presenting a negative test result.

The French green label is due to take effect next month. Earlier this week, following a demonstration of more than 100,000 people taking to the streets, the government decided to soften the outline by lowering the level of fines for non.compliant citizens and changing restrictions in shopping centers. But still opponents of the restrictions are dissatisfied and a number of lawmakers have indicated that if the law passes then they will petition the Constitutional Court against the outline.

These are tough measures that France is taking against vaccine opponents that no other EU country has taken. The decision came with the spread of the Delta strain in France that led to a surge in corona morbidity of more than 125% in about a week. The French health minister told CBS News this week that 96% of cases in the country originate from the Delta strain.

In Australia, too, there have been huge demonstrations in protest of the closures imposed on the country in an attempt to stop the disease in the country. One of the largest demonstrations took place in the capital Sydney, where a number of protesters who blocked roadblocks were arrested. For hours the protesters walked the streets of the city shouting “Freedom!”.

Authorities in France reported yesterday that the daily number of infections in Corona is 21,493 people, along with 29 deaths. The death toll in France from the virus stands at a total of 85,082 people in total.