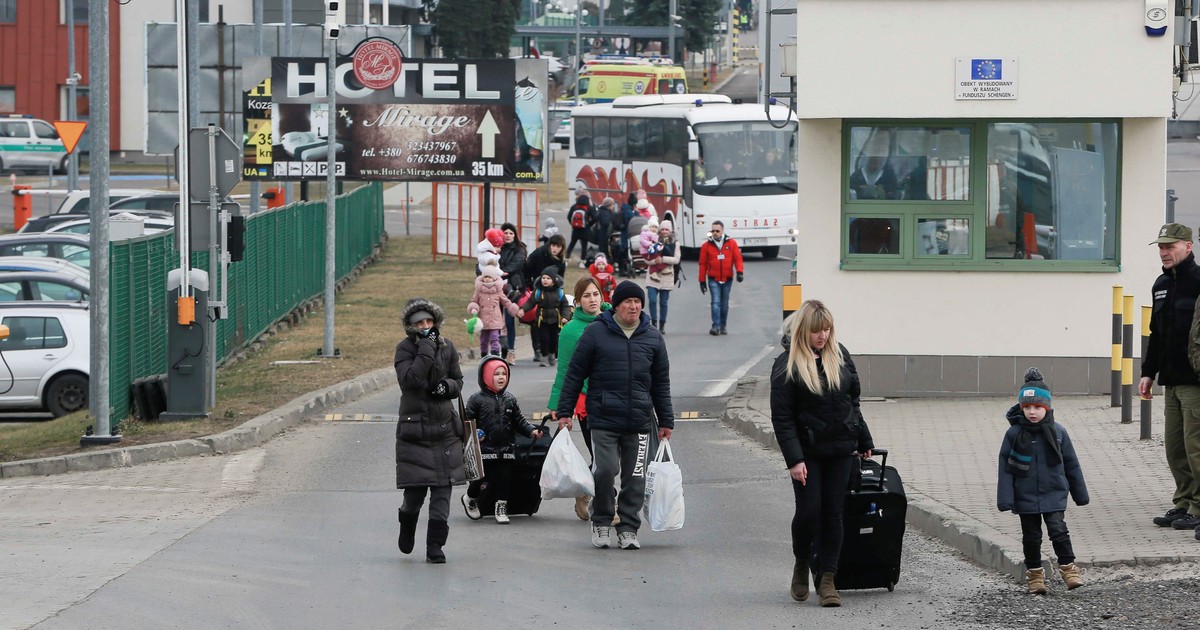 At just 15 years old, Arsen has just set foot on Moldovan soil, but he already hopes to return to his native Ukraine, from which he fled after “three or four days of terror, hiding in the basement of a building.”

“We have to end this nightmare,” says her mother Irina, with tears in her eyes, as she shivers from the icy wind blowing at the Palanca border post (eastern Moldova). But more than the cold, she is tormented by fear.

“The situation in Ukraine is deteriorating. That’s why I had to make this difficult decision and leave,” says the 40-year-old teacher, her two small dogs in her arms and covered in blankets.

Like her, close to a million people have fled from Ukraine these days, under the siege of Russian attacks.

The woman, who prefers not to give her last name, put “documents and some clothes” in a suitcase for her two teenage children. And she left her mother behind.

She “didn’t want to leave Odessa, because too many things bind her” to this port city on the Black Sea, some 40 km from Palanca.

“We heard the bombardments, the missiles,” remembers Arsen, who never fired a shot in the Ukraine and who wants to be a “sailor” one day, like his father currently on board in Argentina.

A shelter for those who fled Ukraine, in Mlyny, Poland, near the Korczowa border crossing. Photo: AP

In the night from Tuesday to Wednesday, the sound of planes flying near the border could be heard in Palanca, where the flow of refugees does not let up.

On the narrow road leading to the border post, escorted by volunteers distributing tea, coffee and sandwiches, a traffic jam formed shortly before midnight, between vehicles going to look for refugees and those leaving the place.

Russian President Vladimir “Putin is a monster, he says he wants to help the Ukrainians, but I don’t need his help,” complains Irina. “Although I speak Russian since my childhood, I am Ukrainian,” she says proudly.

In every corner there are hundreds of refugees hugging and comforting each other, the vast majority accompanied by children.

“Your brother will come, you’ll see,” says Liudmila, a 50-year-old woman, to her friend, devastated to find herself alone at the border post with her four-year-old son in her arms.

Like her, they all look for a transport to Chisinau, the capital of Moldova, or to neighboring Romania.

Some pack as many as five or six people, plus carts, suitcases and other gear, into the vehicle of a family member or volunteer.

One million people have already fled Ukraine in a week of war. Photo: AP

Others walk the five kilometers from the border post to a tent camp erected by Moldovan authorities on muddy ground under falling snow.

Since the beginning of the Russian aggression on February 24, Moldova, a former Soviet republic between Romania and Ukraine, has seen nearly 90,000 Ukrainians cross its borders.

This country of 2.6 million people is among the poorest in Europe and is not used to receiving refugees. Rather has been the victim of massive emigrations by endemic unemployment and corruption.

Since the early 1990s, about a third of its population has emigrated, a demographic drop among the highest in the world.

In 2020, Moldovans elected President Maia Sandu on a pro-Western platform that has seen her clash with Russian gas giant Gazprom over gas prices. The debt skyrocketed in October after a brutal rate hike decided by Moscow.

In total, in the first seven days of the Russian invasion, more than a million Ukrainians have fled to neighboring countries, UN High Commissioner for Refugees Filippo Grandi said on Thursday.

Among them is Alexei, 17 years old. Although he gets into a car on the way to Chisinau, his thoughts are elsewhere, back in Ukraine: “We want to live in our country, free, without the Russian army.”