The Argentine who was in Afghanistan, in Iraq, in the earthquake in Haiti and now lives the Russian-Ukrainian war from Kiev: “It is different from everything” 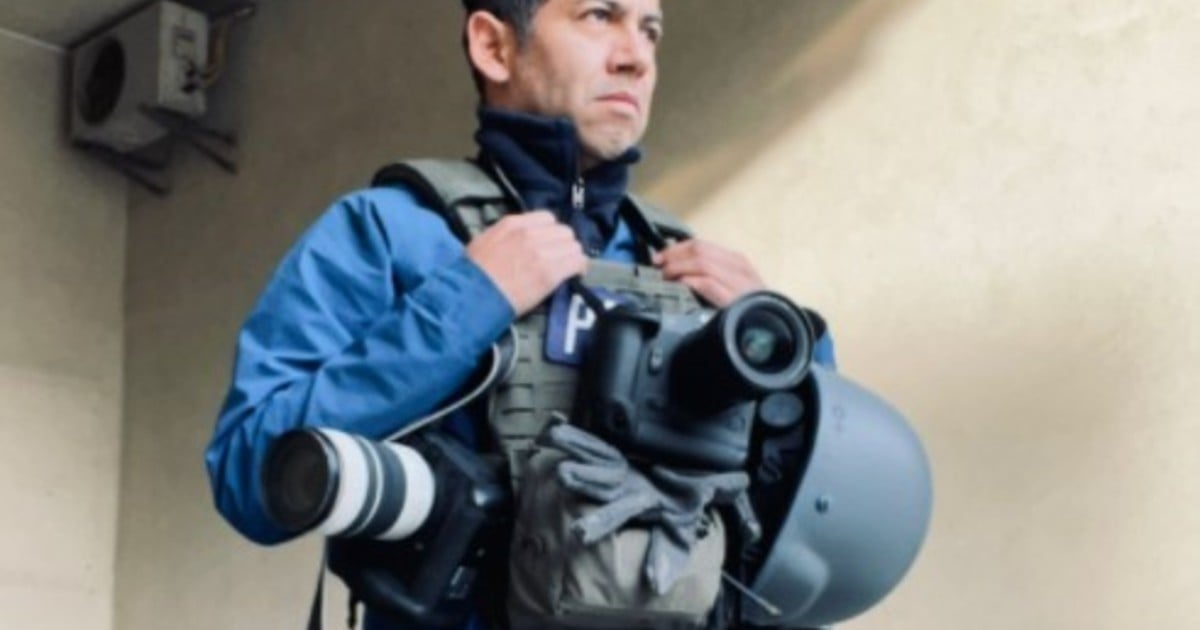 The first day of bombing in Ukraine reigned in suspense. Everyone knew that, in a matter of seconds, that calm that was lived was going to vanish. Argentine photographer Carlos Barría (42) he was one of them: he traveled in mid-February to cover an imminent war conflict, but the outbreak was slow in coming. He didn’t hear about the war on the news, he felt it in his body.

“I woke up with a bang mortar that fell near my hotel at 5.20. We anticipated that one of the nights there was going to be something, but the fact that they fired a mortar into the city meant that the war had begun”, he tells Clarion from a hotel in Kiev, where he shelters from the cold and terror.

Carlos was born in Bariloche, but his experience as a photographer for La Nación and other collaborations led him to settle in the United States. Even, won the 2019 Pulitzer Prize together with the Reuters team: today he is the only foreign photojournalist of the agency in Kiev.

Carlos was born in Bariloche, but his experience as a photographer for La Nación and other collaborations led him to settle in the United States. He even won the 2019 Pulitzer Prize alongside the Reuters team: today, on the tenth day since the Russian invasion, he is the agency’s only foreign photojournalist in Kiev. “You are randomly cast. The images remind us of another era in Europe“, Explain.

─You are constantly at risk. How recurrent is that thought when you go out?

─It’s always there, but what it does is make you constantly alert. We pay close attention to the signs… The risk is there, the game is to minimize it. In reality, there is risk everywhere. Things are very changeable and very fluid.

─And between colleagues? Do they keep up?

─We share information all the time. The other day I happened to be driving to a place and see a sign that said: “Be careful! Mines”. This is the first time something like this has happened to me in the city. What I did was mark it on a map and tell my colleagues to be on alert. We are passing data among all.

It is not the first time that Barría travels to cover a conflict like this: he was in Afghanistan and also in Iraq, but he understands that what happens in Ukrainian lands is “completely different” than those. “The idiosyncrasies -he explains- are different and I fulfilled another role. This is an invasion that can turn into an urban civil war. Artillery is less accurate, therefore more dangerous.”

─ What was the role you fulfilled?

─I was accompanying the American troops in the operations they carried out. In this conflict there is no such possibility: one country is being invaded by another and you as a photographer are in Ukraine, neither with one nor with another. In Russia they didn’t let us in to accompany the troops, so we had to come here. And there is no routine: you have to be prepared for whatever comes.

─Is there coverage planning in the midst of such a changing conflict?

─It has no structure: one has to plan for the things that may come. The important thing is to have enough resources to be able to move, between food, fuel and hotels. Afterwards, you go out to take pictures and see what is happening. On a day-to-day basis you see the logical things…

─The anguish of the people. They are going to get money and there is none, you see queues at pharmacies, bakeries… There is less and less food. Normally they take refuge in bunkers and a few others leave in cars, because there is no more fuel. So the only option is the trains that go to the Polish border. The situations that are seen in the afternoon at the train stations are very dramatic.

─What are you seeing today in Ukraine that you haven’t seen in other war coverage?

─The anticipation. Whenever he covered war conflicts, he arrived and was already happening. I arrived here the day the invasion was going to be and it didn’t happen: it came five days later. It’s very difficult to control and it’s a psychological game too: how do you prepare for the unknown, which is always scary. You know that today was quiet, but tomorrow not anymore.

─It was said that Russia was going to invade Kiev quickly: more than a week has passed since the invasion and it still hasn’t succeeded…

─The Russian troops are having tremendous logistics problems. It cost the supply chain and they also underestimated the value or courage of the Ukrainian troops, who are fighting an extraordinary battle. The other day, for example, I saw a couple setting up Molotov cocktails and collecting bottles. People are preparing for a hand-to-hand battle.

Far from Kiev, Carlos’s life is divided between the hours he works as a photographer in the White House, the time he goes running to forget the routine, and the story he builds with Ruth. “It’s my pillar,” he says. While he flees from terror, his wife is in charge of moving to a new home: “It’s not the first time. It already happened to me to be in another war just when we were moving.”

But despite everything, he understands. She understands because Ruth is also a journalist and, although she is overwhelmed with concern like the rest of her family, she helps him. “They never questioned me. My mom, my brothers… They all know why I’m here. And my wife is my sixth sense. She always questions me about everything and makes me see weaknesses in my preparation. I also do the same with her.”

─Are you proud to be part of this type of coverage?

─There are people who perhaps enjoy coming to cover a war… I don’t enjoy it. I don’t enjoy seeing fear, terror and suffering. It hits me very hard. Maybe it’s selfish, but I come to these places for myself: to understand the nature of being human and to try to be better tomorrow. I have seen the best and the worst of human beings, I have lost co-workers… I don’t want to be old, I want to be wise.

─What was the strongest coverage you had to live?

─The earthquake in Haiti in 2008. I felt that I was in such a big and devastated place, and I couldn’t do anything. I always describe it as the hardest punch I received. I was the first foreign photographer to arrive in Port-au-Prince and I spent a long time there. To this day, Haiti has not recovered.

─How do you prepare yourself psychologically to face it?

I try to be healthy. It is important to have breakfast and rest well: where I can, I sleep. I also talk to people from outside to tell them what I’m going through and get out of all this drama a bit. You have to have a very fresh and focused head, because when you are tired you make mistakes and making mistakes in this situation can cost you your life.

Communication begins to break down. In Ukraine there is no sun anymore: the night is almost as dark as the present. From the hotel, more than 14,000 kilometers from his native Bariloche, Carlos Barría decides to say goodbye in order to rest.

Before, he records a last message for his family, who follows the news from the South of Argentina. The plan for the next day is not clear. “Let’s see what happens,” she says. And he warns: “Hope for the best and plan for the worst.”​