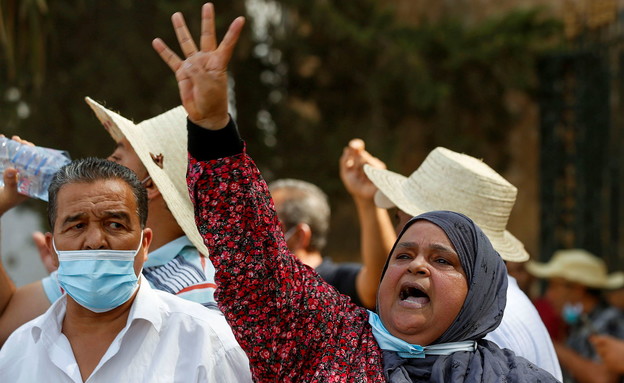 After a decade of relative democracy since the country’s Arab Spring riots in 2011, Tunisia is degenerating into the most serious power crisis in its history: this morning (Monday) President Keys Said ousted the government and froze parliamentary activity in the country. The move, which was backed by the military, was described in media reports in the region as a military coup and “the end of the country’s democratic era.“

The president’s actions come after months of stalemate and conflicts between him and the prime minister, Hisham Mashishi, and parliament. Last night, Said called for a 30.day freeze on parliamentary activities as well as the removal of the prime minister, and announced that he would continue to hold leadership positions alongside a new prime minister – who has not yet been appointed and it is not clear when he will be appointed. In addition, he declared the abolition of the legal immunity of MPs and his takeover of the State Attorney’s Office.

The head of the moderate Islamist party that is taking part in the coalition did not remain obligated and this morning called on the country’s residents to take to the streets and defend democracy. Hours after the president’s announcement, masses gathered in the capital and other cities – some in protest of the move, others in support of it, and at the same time – the military began blocking access to parliament and the state television station. Supporters of rival parties began throwing stones at each other outside the parliament building.

Against the backdrop of the political flare.up, the North African country, which has long suffered from an economic crisis exacerbated by the corona plague, is experiencing a significant drop in its currency value. Demonstrations have been held in recent days against the government and against the largest party in parliament following an increase in coronary heart disease in the country and growing anger over political dysfunction and the economic crisis.

The president claims that his actions were based on a clause in the constitution as a legitimate response to the economic and political crisis that paralyzes his country, but most members of the main parties in parliament – “Lev Tunisia” and “Karma” – joined Islamic Party members and accused Said of coups. The president warned that he would respond violently to his opponents, threatening: “Whoever fires – the armed forces will shoot him back.” Under the constitution, the president has direct responsibility only to foreign and military affairs. Today – it looks different.