Saqr bin Salman: Under the directives of Khalid bin Hamad, we will submit a file to host the International Olympiad for Studies 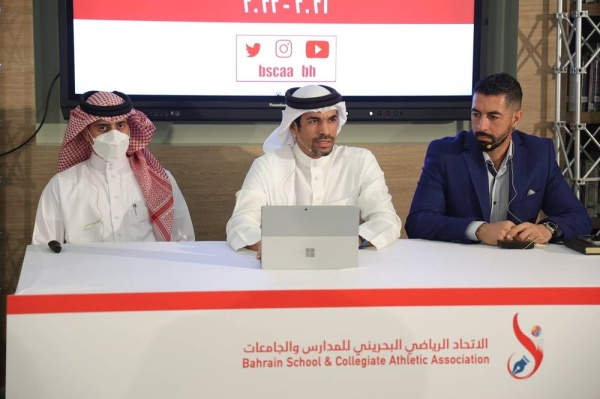 Dr. said. Sheikh Saqr: His Highness formed a committee to prepare the file for submission to the International Federation for School Sports, which includes one hundred and thirty-six federations from different countries of the world.

Dr. explained. Sheikh Saqr that His Highness directed the preparation of a program for the largest possible participation of school students born in 2006-2010 through intensive programs, indicating that the International Federation allows the organizing country to add two games provided that they have an International Federation, pointing out that Bahrain, even if it does not host the Olympics, will participate in it.

Dr. said. Sheikh Saqr: After the directives of His Highness Sheikh Khalid bin Hamad to include schools in the union, we learned about the vision of His Highness Sheikh Nasser bin Hamad Al Khalifa, representative of His Majesty the King for Humanitarian Works and Youth Affairs, Chairman of the Supreme Council for Youth and Sports, to move forward with school sports, and contacts were made with our partners, the Ministry of Education, to build Strong for school sports.

He noted Dr. Sheikh Saqr indicated that the school finals will be held in the last week of March in Khalifa Sports City, after the group champions qualify for the finals, as is the case in the United States of America, and the finals will be played in March of each year.

And Dr. Sheikh Saqr that the federation welcomes the participation of all players from public and private schools, boys and girls, and said that foreign students have the right to represent Bahrain in the World Schools Olympiad if they qualify.

With regard to registration for boys and girls, d. Sheikh Saqr said that the Federation is constantly communicating with the Department of Physical Education in private and government schools to register those wishing to participate in athletics and swimming in individual competitions, noting that registration for football, volleyball and basketball games will be free until the eleventh of this month, provided that the registration fee is Two dinars for those who register after that date via a link that will be distributed later.

Dr. confirmed. Sheikh Saqr that the next season will add some games in light of His Highness Sheikh Khalid bin Hamad’s keenness to crown the champions of competitions to encourage them to shine and practice competitive sports, and that some unions have contacted the Federation to organize competitions for students in the next season, including the Table Tennis and Handball Federation and some other federations.

Sheikh Khalid bin Khalifa announced that the federation had joined the International School Sports Federation on March 1, so that the Bahraini school champions could participate in the World Schools Championship on May 16 of this year in France.

Abi Al-Mana said: The private schools organize their own league, and we communicate with the Ministry of Education to inform it of the results of our competitions. Abi Al-Muna indicated that the Sports Activities Department focuses on promoting sports culture from early sleep and healthy nutrition to build athletes properly, noting that the school administration received During two days, forty-nine applications were submitted to participate in the Bahrain Sports Federation competitions for schools and universities, praising the support of government agencies by allowing students to be trained in public walking fields for their safety.

Coronavirus in the world on January 30, 2023: almost 675 million infections, about 6.8 million deaths. Statistics by country