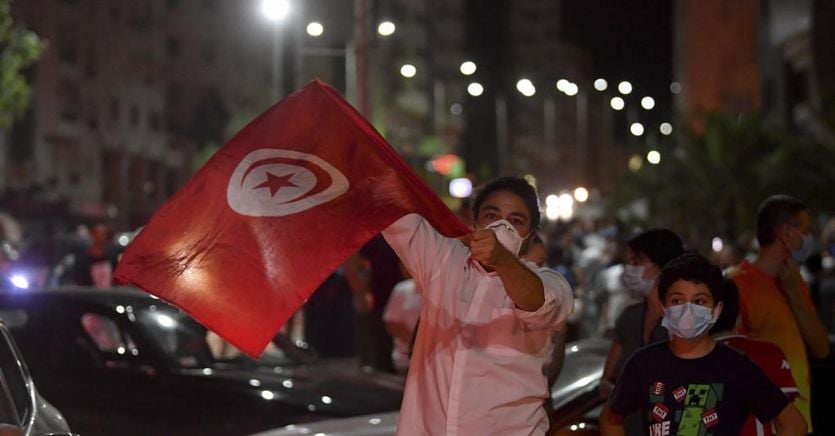 Riots in Tunisia: President Kais Saied, appealing to Article 80 of the Constitution, suspended the activities of the parliament for 30 days while in the night between 25 and 26 July military vehicles reached and surrounded the Tunisian Parliament building in Bardo and the seat of the national television. A few hours before the Tunisian law enforcement agencies closed the local headquarters of the Arab TV based in Qatar, Al Jazeera. Journalists and employees were warned in good time to leave the sites, said the director of the Tunis office, Lotfi Hajji. Shortly before, Al Jazeera on its Facebook page, based on “well.informed Tunisian sources”, had written that Prime Minister Hichem Mechichi is not under arrest but at his home and that he intends to reunite the Council of Ministers anyway.

The suspension of parliamentary activities will last 30 days and all deputies will be deprived of immunity, he said in a statement from the Tunisian presidency, which puts in writing the decisions announced by the head of state in the late evening of yesterday 25 July, including the dismissal of Prime Minister Hichem Mechichi and the assumption of executive power in his hands with the help of a head of government who will be designated later. A decree will be published in the next few hours to specify other exceptional measures, concludes the note.

The opposition: it is a coup

Almost at the same time a military helicopter flew over the capital and one wondered what happened to Prime Minister Hichem Mechichi, sacked by Tunisian President Kais Saied. Unavailable and unreachable, according to local media, he would be under arrest according to the leaders of the Islamic party Ennhadha who are meeting in an urgent meeting to decide how to react to the president’s decisions. According to the same sources, Ennhadha is reflecting on the filing of a motion of no confidence against Saied with the aim of dismissing him. The president of Ennhadha, Rached Ghannouchi said that “this coup will not restore the social rights of the Tunisian people” and called on people to demonstrate peacefully to resume democracy. “The institutions are still in place, the supporters of Ennahda and the Tunisian people will defend the revolution”. These are the words of the president of the parliament of Tunis, Rached Ghannouchi, also leader of the Islamic party Ennahda. The statements of two other leaders of Ennhadha, the first force in parliament, are of the same tenor. “Any measure derogating from the Constitution is unacceptable and will be considered as an obstacle to the will of the people,” Noureddine Bhiri told local radio Mosaique Fm, adding “our institutions will come together and make the necessary decisions”, while Ali Lâarayedh said that the measures announced by President Kais Saïed represent a coup.

The president’s reply: no, I acted according to the Constitution

The decisions to freeze Parliament for 30 days, revoke the immunity of deputies and sack the premier do not represent “a coup d’état”, they are constitutional decisions, pursuant to Article 80 of the Constitution: the Tunisian president retorted, Kais Saied, responding to the President of the Assembly as well as the leader of the Islamic party Ennhadha (first in parliament), Rached Ghannouchi. “Anyone who talks about a coup should read the Constitution or go back to the first year of primary school, I have been patient and I have suffered with the Tunisian people,” Saied told state TV

Yesterday the demonstrators had ransacked some offices of the Ennhadha party which accused some foreign parties behind the protests. Some observers note that President Saied in his speech also left for himself the prerogative of the public prosecution, as if to imply that some political and economic actors could be arrested soon.