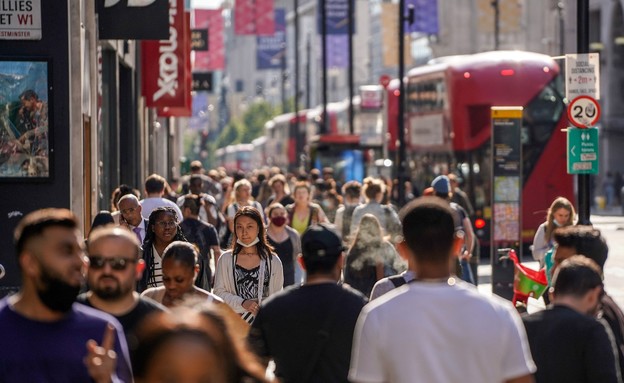 Against the background of the continued spread of the variant variant around the world, many countries are currently presenting their “green passport” version. Along with the growing morbidity, in many places the debate is growing between imposing additional restrictions and dealing with the corona in new ways. While parts of Europe require the presentation of a vaccine certificate at the entrance to community centers, the US administration is procrastinating – and the UK is living alongside the outbreak. Not just here: the global battle for the green passport.

One of the biggest struggles is being waged over bringing the world of tourism back to life after more than a year of plague. More and more countries are adopting models for opening up the sky that allow their citizens to move from country to country and travel the world safely. Demonstrations are held daily in Rome, Paris, Sydney and other cities around the world against the use of a green passport or immunization certificate. According to the protesters, this policy leaves behind poor countries whose citizens have not yet been vaccinated, violate basic civil rights and create inequality.

The White House refused in April to implement a federal immunization passport outline, and President Joe Biden made it clear that citizens’ privacy and rights must be protected. Despite this, four states in the US already have their own active vaccination apps, according to the journal MIT Technology Review, One of the main motives of the countries is the desire to increase the rate of vaccinators.

In California next month all state and health care workers will be required to present a vaccination certificate or be tested weekly. New York City is also adopting a similar strategy and by mid.September will require all of its employees, including police officers and teachers, to be vaccinated or have weekly corona examinations.

Recently, the “Immunized Passport” project was launched, which will operate in all 27 EU countries. Residents of the union will be able to download the immunization or recovery certificate to their mobile phone, or view a written document attesting to the existence of the certificate. Anyone holding a certificate or presenting a negative corona test from the last 72 hours will be able to move freely between EU countries. Despite the freedom of movement between states, the states themselves lead completely different corona regulations and laws, and in each state the conduct will be different.

Authorities have announced the issuance of a “health permit” that will allow residents to enter restaurants, bars, planes and trains. At this point, a gathering of more than 50 people in a closed hall requires the presentation of a certificate of immunization, recovery or a negative test from the last few days. The permit will be required of every adult from the beginning of August, and from September 30 it will also require children aged 12 and over. In recent days, there have been huge demonstrations in France against the approval of the model and more than 160,000 citizens have protested against the intention to force the country’s public employees to get vaccinated.

Thousands of protesters arrived in central Rome today, as they have for most days in recent weeks – after the local government announced that the plan to use the immunization certificates would take effect on August 6. Under the plan, Italians will soon be required to present certificates of immunization, recovery or negative testing as a condition of entry to gyms, swimming pools, museums, cinemas, theaters, sports stadiums and public institutions. The new plan is also expected to apply to seating in bars and restaurants.

Italian Health Minister Roberto Speranza has stated that the government is also discussing the application of the green passport for domestic flights and long train journeys. According to him, these restrictions are not currently on the table, but are expected to be discussed later. According to the outline of the Ministry of Health, nightclubs in Italy will remain closed – or business owners will be forced to enforce the rules and guidelines themselves. A business owner or spender has improved the Yakens guidelines by 1,000.400 euros. If business owners do not enforce the regulations, it will lead to a general closure of businesses in the country for ten days.

In the UK, which has chosen its own way of dealing with the Corona and removed the restrictions, there is no obligation to present a certificate of immunization or recovery at the entrance to clubs, restaurants and banquet halls. However, Prime Minister Boris Johnson has announced that by the end of September a program will be implemented under which “the vaccine will be a condition for entry into nightclubs and gatherings.” The program is based on a vaccine certificate issued in an application from the British Ministry of Health. The app or other versions of it in Scotland and the rest of the counties will save adults from entering isolation upon their return from countries with low morbidity.

China has introduced a code system in the past year QR Which classified people by different colors. While the green code allows citizens to move around without restrictions, the yellow code may require the Chinese to stay indoors for seven days. The codes are obtained from a combination of external data and data provided by the users themselves. Many public institutions in China require the presentation of theQR As a condition of entry. In March, China launched a digital health certificate showing its immunization data and corona test results. China hopes that in the future, citizens will be able to use the certificate as a green passport in other countries as well.

Although Australians hold a digital immunization certificate on their mobile phones, this does not provide them with any benefits. Australian Tourism Minister Dan Than said a green passport could provide Australians with “the option to fly during closures or to deviate from sweeping restrictions in areas closed due to an outbreak”. According to him, ensuring the freedom of the vaccinated citizens will help the efforts to vaccinate the population.