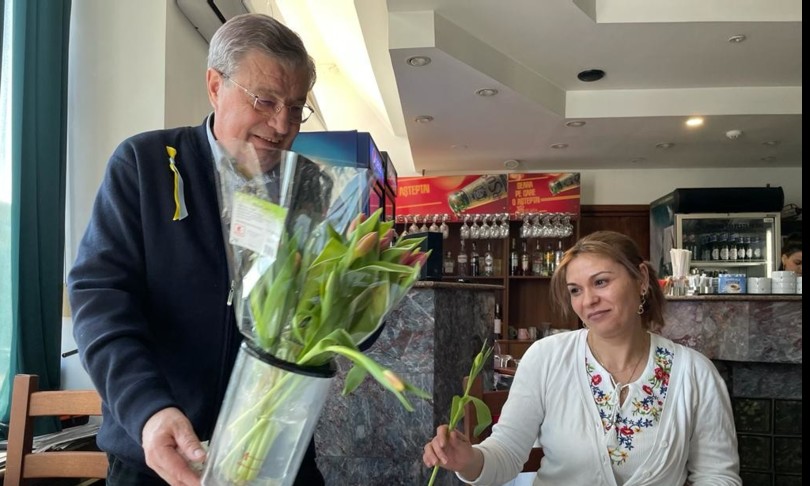 March 8 in Romania is both Women’s Day and Mother’s Day. The policemen gave yellow tulips to Ukrainian refugees by relaunching a video in which they pay homage to them in the media.

Aurel Cacencu, sporting a yellow and blue bow on his chest, celebrates by handing out red and white tulips and bracelets to Ukrainian guests in his hotel, “the colors of blood and snow”, as per tradition. In Tulcea, the border town where they disembark from Odessa through the Danube and the port at this time, his hotel is known as one of the most luxurious and a look at the parking lot where several large cars stand out confirms this.

“Until now mostly wealthy Ukrainians arrived but refugees with no money are also starting to show up. We host everyone, right now in 40 out of 47 rooms there are Ukrainians with children “he tells AGI – Most of them come from Iztmail, which is about twenty kilometers from here, where there were bombings in the recent days, and wants to go to Bulgaria “.

Mr. Cacencu, flanked by a cook who translates from Romanian to Italian, learned in five years as a caregiver in Desenzano on Lake Garda, is moved several times. Particularly when he says that a few days ago “a poor grandfather, with a very poor pension, brought a large bag with salami, bread and other food, and left it at the reception, saying it was for refugees”.

Instead, he laughs when he thinks of a woman “who came with sixty eggs and boiled milk”, her contribution to the cause. How did your guests react to the floral tribute? “Like all women, happy!”.

Before leaving, he asks us for hospitality in Italy “when the war comes here”. “Putin will not stop, he is like Mussolini and Hitler. I am convinced that he will hit us too”. Flowers for refugees also on their arrival on the Romanian bank of the Danube in Isaccea, during a snow storm. Also on the other border between Romania and Ukraine, in Siret, there is celebration, as far as possible in this context.