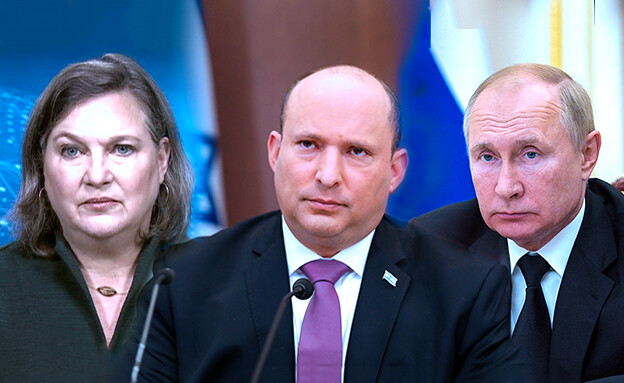 The United States’ decisive message to Israel: “We are asking as many countries as possible to join the sanctions and we are asking Israel to do the same,” she said. “The last resort for dirty money that fuels Putin’s war.”Asked if Israel had been asked to provide military assistance to Ukraine, Noland said: “This is an independent decision that Israel needs to make. Many democracies around the world are leaving the comfort zone to provide military equipment to Ukraine but the most important thing for us is to join economic sanctions.”

Asked about the Israeli mediation in the negotiations and if he has a chance, the US Secretary of State replied: “We think that any effort to turn President Putin into a civilized person and to negotiate with a real intention to get his forces from Ukraine is welcome. The prime minister’s efforts are welcome. “Today, Putin’s demands are exaggerated.”

“Putin is actually demanding the surrender of Ukraine,” she continued. “They have no plans to surrender in the near future and it is Putin’s army that is defeated so we welcome any diplomatic effort. The fact is that in the past Israel had good relations with the Kremlin so we admit the prime minister is willing to use it to end the war but President Putin does not seem to listen.”

On the question of how, if at all, Israel’s position is taken into account in negotiations on the return to the nuclear agreement, Deputy Minister Noland said: “Of course. In the whole process of returning to the nuclearJCPOA (Powers agreement on Iranian nuclear program) and Iran’s nuclear weapons development, we are in daily contact with the Israeli government, intelligence agencies work together and the White House works with the Prime Minister’s Office to share intelligence, understand the picture and incorporate pressure points. We understand that if the deal goes through, it will be necessary to work with Israel on its security requirements”.

Asked what else could be done to put an end to what was happening in Ukraine, she replied: “I share the anger of those who watch the horrific images of the humanitarian catastrophe. “Allies from Asia, North America and Europe are imposing the most severe sanctions we have ever imposed, other than hermetic sanctions, and this has a devastating effect on the Russian economy.”

US President Joe Biden has announced further measures against Russia this afternoon, amid fighting in Ukraine. Biden said in his speech: “We will lower Russia’s trade status, and that will make it difficult for us to do business with us.” The new sanctions imposed by Biden on Russia include, among others: a ban on imports of seafood, a denial of Russia’s ability to borrow money from the World Bank and the World Monetary Fund, and a ban on imports of diamonds and vodka.

The president also added other names to the list of oligarchs who were sanctioned. He also said in his speech that he would ban the export of American luxury goods to Russia. The President of the United States concluded by saying, “The purpose of the operations is to crush the Russian economy.”

European Commission President Ursula von der Lane also referred to new restrictions on Russia. In a speech tonight, she said that Europe would ban the import of key goods from Russia, in the metal and steel market.

Von Der Lane added in a speech that it would propose a comprehensive ban on new European investments in Russia’s energy market. The president of the commission also announced that Europe would ban the export of luxury goods to Russia, and that Europe would prevent Putin’s associates from using cryptocurrencies to make money transfers.