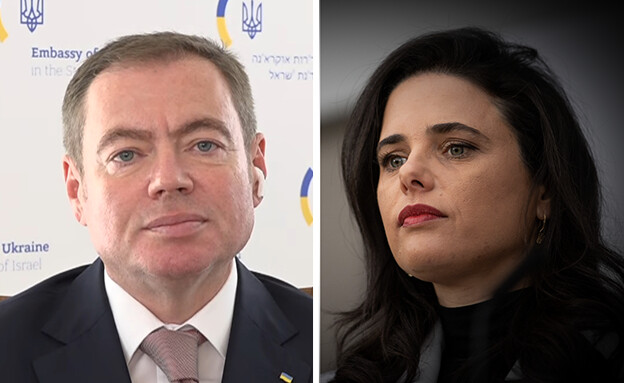 Poor developments in Ukraine-Israel relations: We revealed tonight (Saturday) that Ukrainian Ambassador to Israel Yevgen Kornichuk has chosen to file a petition in the High Court against Israeli government policy and Interior Minister Ayelet Shaked’s policy.

Lawyer Tomer Warsaw has filed a petition with the embassy, claiming that the interior minister uses the term “quotas” as a smokescreen to disguise a violation of international agreements and legislation.

In a statement that was initially made public, the ambassador wrote: “”Protect the rights of Ukrainian nationals,” the Interior Ministry’s new policy says, in violation of agreements between Ukraine and Israel providing exemption from clearance for Ukrainian citizens.

“Tonight I filed a lawsuit in the High Court against Ayelet Shaked’s decision to bar Ukrainian refugees from entering Israel beginning tonight, including a request for an order barring the decision’s entry into force,” Adv. Tomer Warsaw told N12. “We discovered that not only was this a breach of international responsibilities, but that the minister was also not entitled to make such a decision; it should have been made by the cabinet or at the very least after consultation with the Knesset Interior Committee. The petition was submitted at the request of the Ukrainian Embassy in Israel “..

This is a noteworthy development, owing to the ambassador’s multiple dynamics with the Israeli government, including the problem of supplying defensive weaponry and the matter of shutting down Russian media. He is now filing a petition against the government’s policy on Ukrainian refugees, both those who have been turned down and those who will be unable to go at all owing to the interior minister’s new plan.

Protests against Shaked have taken place, as well as criticism from within the administration.

Shaked is also facing backlash from Beit: dozens of activists gathered outside her home tonight, chanting “Jews do not deport migrants.” Hundreds of people subsequently demonstrated at government offices near the Azrieli junction in Tel Aviv. Cries of “shame” were heard against Interior Minister Ayelet Shaked during a protest of solidarity with Ukraine in front of the government compound. “Lieberman will resign” and “Bennett humiliation” were also used.

Inside the cabinet, there was more criticism: “In the context of the tragic crisis in Ukraine, the talk here over certain refugee quotas is shamelessly trivial,” Health Minister Nitzan Horowitz said tonight. “, he explained “By its very essence, Israel must reach out to refugees and oppressed individuals whose world has been devastated, as part of a larger effort by Western countries. Meretz will be adamant about it.”

“I will demand at the next cabinet meeting that there be a ministerial committee that decides what Israel’s refugee absorption strategy is,” Diaspora Minister Nachman Shai said of Shaked’s behavior at the “Meet the Press” studio. Shai claims that “It can’t be left in the hands of just one minister. The state of Israel’s face is on the agenda.” Shaked, who had just accused Nachman Shai of publishing libel earlier this week, responded: “Nachman Shai, Israel’s Diaspora Minister, should focus on his work rather than preaching to others. Thousands of people who are entitled to return to Israel are awaiting their arrival “..

The outline that sparked fury – and prompted a petition

Ayelet Shaked, Israel’s interior minister, declared earlier this week that Israel will temporarily house 25,000 non-Jewish Ukrainian people “until the wrath subsides.” According to Shaked, 20,000 of them were already in Israel illegally before to the war. Furthermore, refugee guarantees would be eliminated, and instead, Israelis will be compelled to fill out a statement stating that the guest will leave as soon as the state of emergency is lifted.

“About 20,000 Ukrainian citizens who were in Israel before the commencement of hostilities, usually in violation of the law, will be temporarily housed in Israel. We will also enable them to work in Israel if, God forbid, the violence does not stop within an acceptable time frame “Shaked elaborated. “In addition, an additional quota of 5,000 Ukrainian citizens who arrived or would arrive after the commencement of hostilities was agreed upon.”

In an interview with Ulpan Shishi yesterday night, Ukraine’s envoy slammed Shaked’s outline: “This is very unacceptable to us. Yes, of course. Again, it is permissible to both parties under existing conventions, to which Israel is a signatory.”

In response to charges that many refugees come to Israel for economic reasons, he said: “Don’t give yourselves a pat on the back! It’s not easy to get to Israel, and staying there isn’t always pleasant. Your country is one of the world’s most expensive.” After the battle, the refugees would move there seeking temporary work and educational frameworks for their children.”