Mario Draghi: “We are not in a war economy but we must prepare” 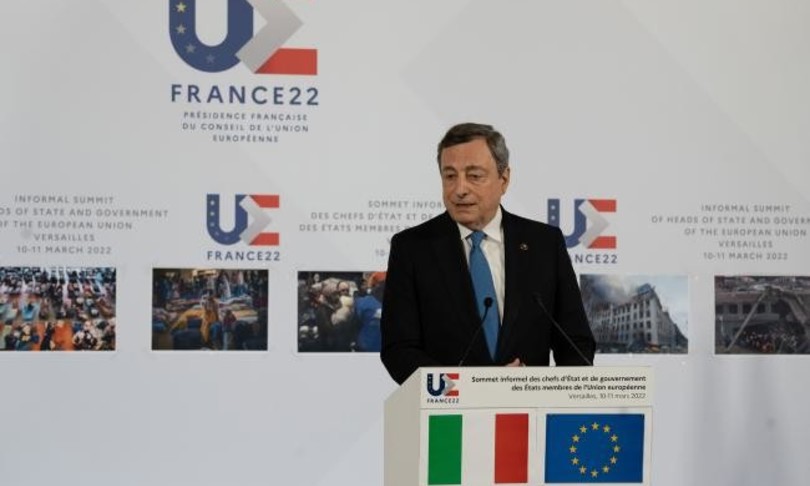 Europe and Italy are not in a phase of “war economy”, but the “future worries” and “we must prepare”especially if the conflict in Ukraine continues for a long time.

This is the message that Mario Draghi delivers to the heads of state and government of the EU gathered in the castle of Versailles.

Energy supplies are an increasingly evident problem, the scarcity of raw materials is now a fact with which we must deal, the agri-food sector risks a collapse linked to the increase in prices.

The only possible answer, according to Draghi, is that of prepare for an emergency scenario and work together to weather the storm unscathed.

The summit “was a success, never seen the EU so compact”, says the premier meeting journalists in the Salon d’Hercule of the residence that once belonged to the kings of France, behind him a panel of the French presidency with images of the bombings and of the victims of the Russian attacks in Ukraine.

In reality, from the summit there are not a few distances between the leaders on the Kiev accession process to the EU or on the economic instruments to deal with the crisis.

And the premier himself admits the diversity of views on Ukraine’s rapprochement with the EU.

The Twenty-Seven reiterate their support for Ukraine, but without the accelerated procedure for Kiev’s accession to the EU, pending the Commission’s opinion.

“No one – says Draghi – expected an open language for immediate accession. Italy is very much in favor but we must respect the Treaties”, he adds. But despite the distances, Draghi assures us, on the key points, we are working with a “spirit of solidarity”.

Starting with energy, on which the summit sets a response based on four pillars: diversify supply sources, “both by finding other gas suppliers than Russia, and by focusing more on renewables), fixing the ceiling on the price of gas ( proposal that Italy supports and that the Commission will put pen to paper at the next Council in March), finally detach the market for electricity produced by renewables from that of gas, and tax the extra-profits of electricity companies, with a revenue that Brussels estimates at € 200 billion per year.

But the problem is not just energy dependence, adds Draghi, the war in Ukraine has also exposed the difficulties of much of Europe in the agri-food sector, starting with the scarcity of wheat.

“If this continues or worsens, it will be necessary to import from other countries, the United States, Canada, Argentina”, adds the premier. To act, however, Draghi repeats, the rules must change: the economic emergency linked to the war, after two years of pandemic that had already changed the European paradigm, can only be overcome if “the entire regulatory apparatus” is overcome.

Starting with Stability Pact, from the rules on state aid, to the standards of agricultural products that may be imported.

“Basically, there is the now consolidated conviction of the Commission that it is necessary to temporarily revisit the rules that have accompanied us in recent years”, says Draghi. Another issue on the table on which the EU seems to be approaching is that of defense: the head of European diplomacy Josep Borrell recalls that the European Union spends three times what Russia spends on defense.

But each one does for himself, says the premier, “what we must now achieve is a much better coordination than what exists today.

“Participation in tenders, production, joint projects, licensing, coordination of troops on the ground: these are all areas on which it was decided to continue together”.

The next steps will inevitably be dictated by the war on the ground: “We need a peace solution that saves the dignity of Ukraine, but Putin today does not want peace”, reiterates Draghi, who rejects the hypothesis that Italy has been held. outside the talks between the leaders: “All the feedback received in recent days goes towards a request for involvement and a desire for an Italian presence. The general problem is not seeking a role but seeking peace”, he adds.

But they are also the economic consequences that will fall on European citizens to worry. “It is a moment of great uncertainty, it cannot be said that the economy is going badly because Europe continues to grow – continues the premier – but at the same time this uncertainty suggests concerns for the future and therefore dictates what the agenda is. of economic policy for the next few months “.

The national budgets of individual states alone cannot do anything, the risk is that there are not enough funds to deal with the fallout from the sanctions on Russia, the reduction in exports, the lack of raw materials and energy, he says. Draghi again: “a European compromise must be found on how to generate these resources“and the answer can only be” a convincing response from budgetary policies. That cannot come from individual countries: we have already spent 16 billion to mitigate the effect of the increases, now there must be a European response “.