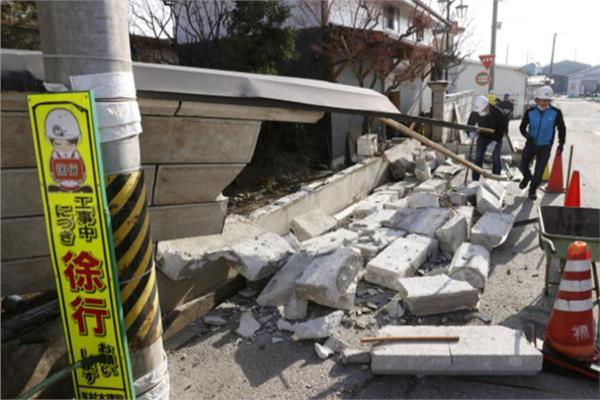 Japan announced today, Wednesday, that a 7.3-magnitude earthquake struck the east of the country, warning of an incoming tsunami.

According to the Japanese authorities, the earthquake that hit the east of the country was huge.

The authorities added, after the earthquake, electricity was cut off to several areas in Tokyo.

Since the days of the eleventh anniversary of a violent earthquake and tsunami and the accompanying nuclear disaster that devastated the northeastern regions of the country on March 11, 2011 and left more than 15,000 people dead, Japan has revived the worst natural disaster in Japan’s history since the World War .

And the official Japanese news agency, “Kyodo”, reported that the country managed to rebuild the infrastructure in the heavily affected areas, but there are still about 38,000 people displaced more than a decade after the earthquake, which measured 9 on the Richter scale, which It caused a massive tsunami, widespread damage, and collapses at the Fukushima Daiichi nuclear complex.
Despite the central government’s decision in Tokyo not to hold a memorial service this year in light of the continuing Corona virus pandemic, municipalities in the affected areas announced a decision to hold memorial services on a smaller scale, with Prime Minister Fumio Kishida scheduled to attend a ceremony hosted by Fukushima Prefecture this afternoon.

“We have renewed our determination to adhere to the bottom-up approach. There will be no reconstruction of Japan without the reconstruction of Tohoku, which was affected on a large scale by the disaster,” Japanese Reconstruction Minister Kosaburo Nishim told reporters.

According to the latest data from the National Police Agency, the death toll has reached 15,900 people and 2,523 people are still missing, mostly in Miyagi, Fukushima and Iwate prefectures. Related deaths, such as those from illness or stress-related suicides linked to the disaster, totaled 3,784 as of September last year, according to the Reconstruction Agency.