Together with the US ambassador, the chief of staff was shown for the first time with the Ukrainian flag 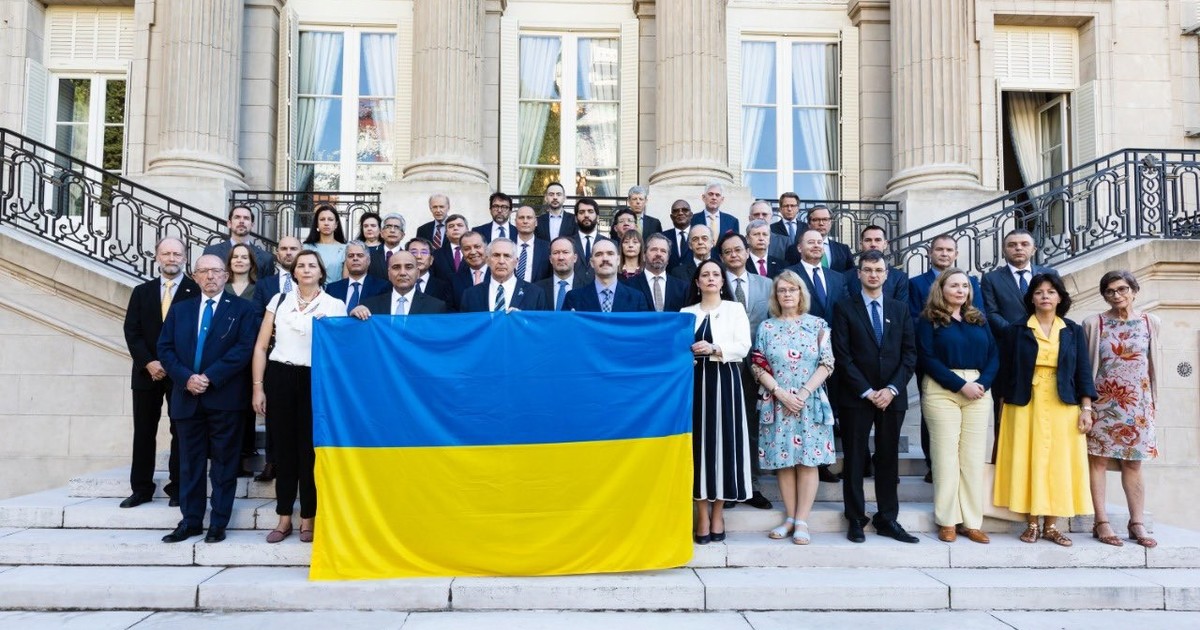 The chief of staff, Juan Manzur, he turned this Wednesday in the first member of the national government who posed openly with a huge Ukrainian flag.

“Just as 141 of the world’s countries supported Ukraine in the United Nations, we join again today in affirming our commitment to the sovereignty of Ukraine and demand that Russia immediately cease its unprovoked attack,” Stanley wrote on the embassy’s Twitter account and posing with all those who joined this “solidarity campaign” with Ukraine and its people after the invasion of Vladimir’s forces. Putin.

Along with Manzur, Stanley and Nebrat were, among others: the German Ulrich Sante; the British Kirsty Hayes; the European Amador Sánchez Rico; the Mexican Lilia Rossbach; the Colombian Carmelo Pava and the Ecuadorian Xavier Monges, among others.

Official Argentine sources reported that Manzur was in the British residence and in the front row with Stanley, Nebrat holding the Ukrainian flag as a representative of the Argentine Government.

His presence is not without a strong political content since he is one of the officials most closely linked to the United States and Israel. The western wing of the Government, as opposed to that of the ultra-Christianists, who have a highly anti-American, pro-Chinese and Russian vision and who have never been heard to condemn Putin’s invasion of Ukraine. Neither did the boss, Vice President Cristina Kirchner.

Meanwhile, the government had a hard time turning around its first position on the Russian-Ukrainian conflict. And President Alberto Fernández was left in a more than uncomfortable position due to his trip to Russia at the beginning of the conflict. It was on February 3 and before Vladimir Putin he spoke of his desire to break dependence on the United States and the IMF.

In those days, Ambassador Stanley had a strong gesture for being in a foreign country. With Alberto on a trip, he visited the Ukrainian community in Argentina together with the diplomat Nebrat. Weeks later he organized a photo with the ambassadors of the European Union in Argentina. And again they unfurled the flag of the invaded country.

In its first statements, the Foreign Ministry spoke of a call for peace. But when Putin gave the order to attack Ukrainian territory, Foreign Minister Santiago Cafiero and later Alberto Fernández spoke of the Russian invasion and called for it to stop its attacks on Ukraine. At the same time, the government condemned the invasion at the United Nations Human Rights Council.

The opposition meanwhile, vHe has been calling for actions against Russia and/or in favor of Ukraine in many different ways.

The last project was presented by Mario Negri. The head of the radicals in Deputies requested that President Volodimir Zelensky be invited to speak before the Argentine Congress, virtually, of course, as several parliaments did, including the United States and the United Kingdom. He reminded Negri that a community of Ukrainian descendants of more than 400,000 people lives here and that the Argentine government has not made a statement since Alberto F. opened the sessions of Congress.

That March 1, the deputies of Together for Change stuck some Ukrainian flags on their benches.

Negri called for a minute of silence for the Ukrainian people. Cristina Kirchner snatched the floor from Negri, and pressed the President to do it himself. Then there was a silence that lasted only a few seconds.

From the Civic Coalition, Maximiliano Ferraro and Juan Manuel López have been calling for the defense agreements with the Russian Federation to be cut. And from the PRO, the Secretary of International Relations, Fulvio Pompeo, have been asking that CELAC be asked to interrupt a cooperation agreement with Moscow.