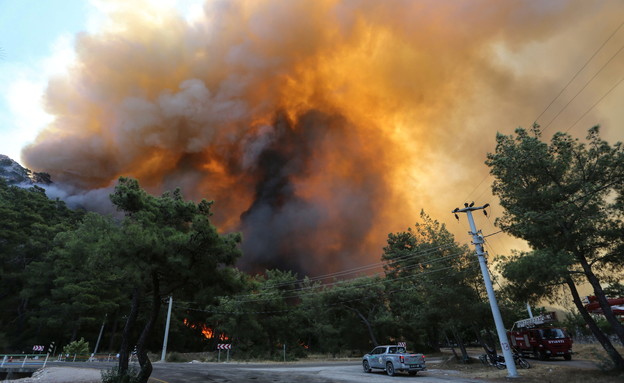 “How did the fire get here so fast?”: The apocalyptic photos came last weekend from the resort town of Bodrum in Turkey. Frightened tourists rush to the beach and wait for rescue boats after being instructed to evacuate several hotels at the Aegean Sea resort following the spread of huge fires in villages, towns and open spaces. At least 6 people were killed and at least thousands of tourists were evacuated. Turkish President Recep Tayyip Erdogan visited the place and promised to provide compensation.

The Coast Guard units led the operation and the authorities asked for dedication and private yachts to assist in the evacuation efforts. Videos from the reserve show heavy smoke and fire quickly enveloping a hill above the beach. In Turkey, at least six people have been killed in a wave of fires after two forest workers were killed by fire.

Since Wednesday, several forests have been burned in Turkey and as mentioned – according to the report in the main headlines in the country, several localities have burned, penetrated villages and tourist destinations and forced many to evacuate. The Russian news agency Sputnik reported that more than a hundred Russian tourists had been evacuated from Bodrum and transferred to new hotels. In one video of the fire filmed from the sea, a man who helped evacuate was amazed at the speed with which the fire was advancing and said “It’s unbelievable, just unbelievable. How this fire got here so fast, in 5 minutes.“

There are 23 different wildfires across the country!

The planet is screaming CLIMATE CHANGE IS REAL pic.twitter.com/cCC5zxUjKt

The Minister of Agriculture and Forestry, Dr. Bakir Pekedmirli, said yesterday that 91 of the 101 fires broke out amid strong winds and scorching heat. Neighborhoods affected by the fire in five districts were declared disaster areas. “We can do nothing beyond wishing God’s mercy on the lost life, but we can replace everything that was burned,” he said.

The Turkish president added that the number of planes fighting the fires has increased from 6 to 13, including planes brought in from Ukraine, Russia, Azerbaijan and Iran. Thousands of Turkish planes and dozens of helicopters and UAVs also aided the firefighting efforts. In a speech in Marmaris on Saturday night, Erdogan said one of the fires there began as a children’s game.

May Allah send down His help for the people of Turkey #PrayForTurkeypic.twitter.com/dIieeFOMMU

Forest fires are common in the Mediterranean and Aegean regions of Turkey during the dry summer months. When Israel enters a week of heat wave, even throughout southern Europe a heat wave is felt that feeds on hot air from Africa and brings fires throughout the Mediterranean in Italy and Greece as well. In all these countries – expect very difficult days with 42 degrees of heat combined with dryness and fires.

Big fires are breaking out all over Turkey! Our country cannot control the fires because they are in large extents and so many different places. Our country doesn’t have enough equipment and vehicles to put out multiple big fires. ++ pic.twitter.com/zvNreet5Dw

Galit Cohen, director general of the Ministry of Environmental Protection, warned yesterday in a “world order” that we in Israel will continue to face similar challenges. “Extreme climate phenomena will continue and remain,” Cohen admitted. “Israel is currently not prepared to deal with climate change.“