Food costs in Russia are skyrocketing, and Russians are looking to stock up 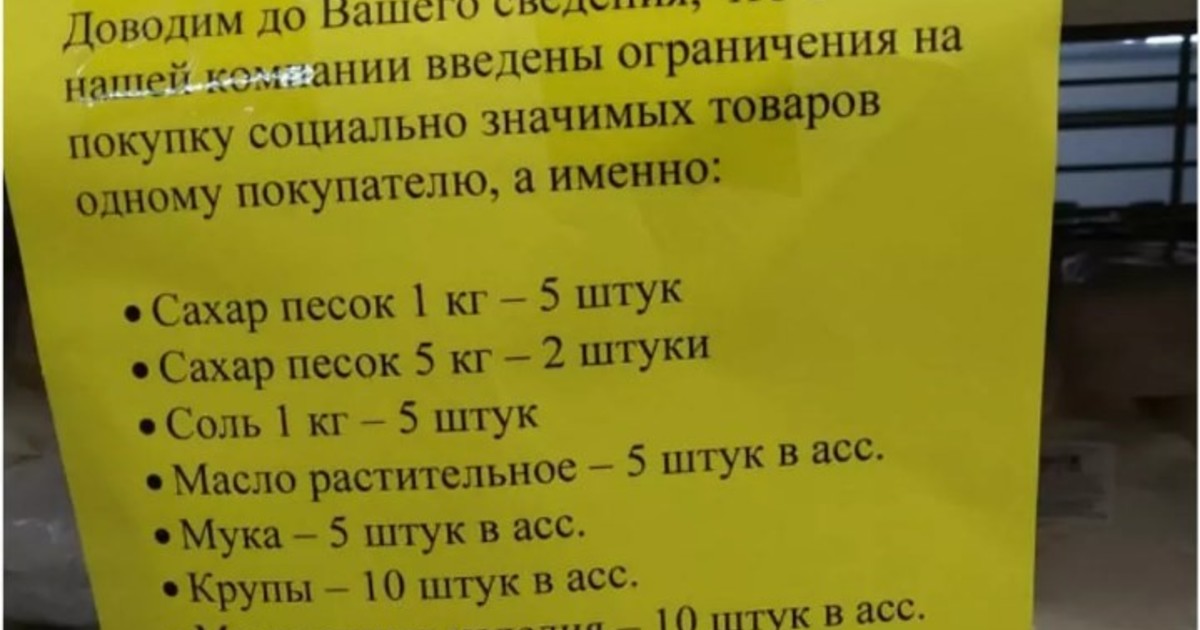 The severe depreciation of the ruble, financial restrictions, and the exit of Western corporations from the Russian market for goods and services have pushed up food costs and forced some to disappear in Russia. There is no lack of food, according to the authorities. Russians, on the other hand, purchase buckwheat, salt, and sugar.

On March 15, these Muscovites’ social media posts illustrate that Russia’s war in Ukraine did not strengthen Russians’ faith in the government’s food propaganda. Despite assurances that there will be no shortages, the country’s residents prefer to store up on food in case something goes wrong.

Sugar, cereals (mostly buckwheat), and salt are disappearing from stores, according to Russian regional media, which is an indication of food panic.

“In Vladivostok, supermarkets continue to stock up on sugar and other necessities. The vacant shelves in which these products were discovered may be seen at the Sambury chain store on Dalpresse and Chernyakhovskogo Street,” they report from Vladivostok.

“Some things are also difficult to come by in these supermarkets. Buckwheat and salt, for example. Blizkiy, the chain’s sister store on Voropaeva Street, is similarly devoid of sugar,” they say.

Auchan, a French hypermarket company that has decided to stay in Russia despite the sanctions, has put limits on the selling of specific products. Auchan and Ataka, the chain’s sister stores, used to sell 10 kg of sugar, 10 bottles of vegetable oil, 10 kg of wheat, three packets of salt, and 10 boxes of pasta.

The authorities are attempting to correct the problem, particularly in terms of limiting price increases. On March 14, the Russian president signed a resolution prohibiting grain shipments to Eurasian Economic Union members, as well as sugar exports to third countries in general.

Prime Minister Mikhail Mishustin also recommended that if prices rise by more than 10% from their average, the public money might be used. In addition, the Federal Antimonopoly Service (FAS) has established a hotline for anyone to call to complain about price hikes.

Simultaneously, the United Russia party claims on Instagram that “Russia is entirely self-sufficient in major food goods, dairy products, vegetables and fruits are sufficiently produced in the nation, and the sanctions will have no impact on the food supply.”

The terms “raise milk supply” and “enhance quality” are heard on television once again, as they were in Soviet times. The Russians, on the other hand, continue to buy food in advance.

The exodus of multinational food chains such as McDonald’s from Russia has sparked excitement among certain social media users who believe that now is the time for national enterprises to enter the market.

However, Teremok founder Mikhail Goncharov believes that Russian businessmen will not be able to compensate for the lack of McDonald’s.

“Of sure, no one will take the place of McDonald’s in Russia, because no one else in Russia now has a similar business in terms of complexity and system,” he said on Facebook.

“It won’t happen either,” he concluded, “since the typical bill and price of a meal on a Mac has always been extremely low.” (…) Teremok and other Russian corporate representatives have not been developed as McDonald’s competitors simply because we cannot compete with them.”

According to Russian media, the cause for the rise in food prices is not only due to the withdrawal of Western food brands.

Feed, fertilizers, transportation, and packaging all increase in price or disappear altogether. Foreign equipment, materials, and substances are used in Russian products.

Residents in Udmurtia, for example, were perplexed as to why local milk was more expensive: “Are we bringing milk in from the States?”

The cost of feed (animal feed), veterinary drugs, energy, fuel, construction materials, and mineral fertilizers, according to the region’s Ministry of Agriculture, affects the price.

“For domestic businesses, import substitution would be an excellent idea. But only when sanctions are not in place. After the takeover of Crimea in 2014, the theory gained traction in Russia. And, indeed, it has been accomplished over time. Pavel Syutkin, a Russian and Soviet cuisine scholar, told RFI that “the share of native products should be increased.”

“But even then, this was done to the prejudice of the consumer and in favor of enormous farmers,” he continues. In the absence of competition, product quality deteriorated in comparison to foreign products, and prices skyrocketed everywhere. There was no’revolution’ with imports at the same period. It has only fallen by a third in the food sector.”

“Today, Russian public opinion is unconcerned with a big portion of the country’s food output. However, impartial experts have concluded that the import substitution plan has failed in general. (…) “Formally, ‘Russian’ items are made with foreign equipment that is significantly reliant on the supply of spare parts, consumables, and packaging,” the expert continues.

“The Darkest Days of the Soviet Union”

Co-author Olga Syutkina compares the situation to the Soviet era, citing “product deficiencies under the absolute duplicity of the authorities.”

“However, this likeness cannot be complete: attempts to freeze prices may be made, with the inevitable disappearance of fundamental supplies and shortages. There will also be a specific office for authorities, police officers, and other law enforcement officers. There is no doubt that I also know, and they will restart the nomenklatura’s ‘dining rooms’ for ministers, deputies, and their personnel with surreptitiously purchased western quality products,” dice.

The difference, he believes, is that the Russian economy is now far more reliant on imports.

“Today, hardly no category of consumer products is completely import-dependent. This entails a drastic reduction in the range, which will revert to the worst of Soviet times in terms of quality and quantity,” he concludes.