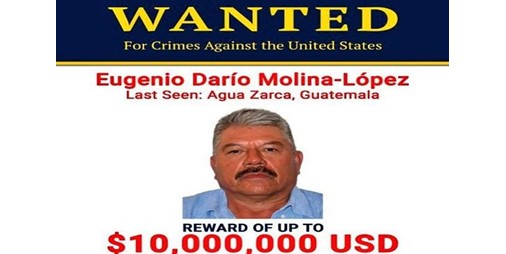 The US State Department has announced a reward of up to $10 million for information leading to the arrest or conviction of Eugenio Dario Molina López, known as “Molina”, an international drug dealer in Guatemala.

A statement by the US State Department on its website stated that Molina is the leader of a transnational criminal organization that is primarily based in the Los Histas region in northwest Guatemala on the border with Mexico.

The statement noted that Molina’s leadership within Los Histas is well known to the governments of the United States and Guatemala, and we are working together to bring him to justice.

An indictment was issued against Molina by the US Department of Justice and the Treasury Department imposed financial sanctions against Molina and other individuals and entities associated with him in Los Hestas. The statement noted that this is another example of the US government’s coordinated approach to combating transnational organized crime in Central America.