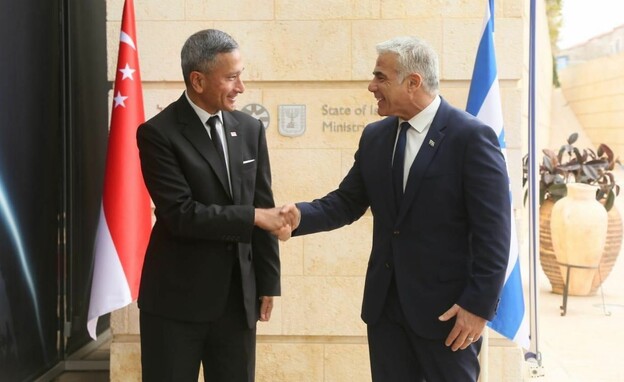 Singapore announced today (Monday) that it is about to open an embassy in Israel, for the first time since relations between the two countries were established. Foreign Minister Yair Lapid, who received the news today, welcomed the move.The announcement comes after a meeting between Foreign Minister Lapid and his Singaporean counterpart Dr. Vivian Blackrishanan.

“Welcomes the decision of the Singapore Government to open an embassy in Israel for the first time since the establishment of relations,” Lapid announced. “This is further evidence of the good and special relations between the countries.”

Singapore has always been a close friend of Israel. However, the fact that it is in a “neighborhood” of Muslim countries like Indonesia – the largest Muslim country in the world – has prevented it from opening an embassy, ​​until now.

In February 2017, former Prime Minister Netanyahu visited Singapore. During the visit, he agreed with his Singaporean counterpart on expanding trade agreements and strengthening security ties between the two countries. But countries have had ties for decades – economic and security.

The Israel-Singapore Chamber of Commerce began operating as early as 1990 as a sub-chamber of the Israel-Asia Chamber of Commerce, which was established in 1988. In 1996 an economic agreement was signed between the countries and in 1997 a bi-national fund for joint industrial research and development was established. Singapore imports technological equipment from Israel, while Israel imports mainly computer equipment from Singapore. Many Israeli companies operate from Singapore with full government support.

With the announcement, the Minister of Innovation, Science and Technology, Orit Farkash HaCohen, signed an agreement on cooperation in the field of artificial intelligence with the Minister of Foreign Affairs of Singapore. The agreement will include AI collaborations in the areas of food, agriculture, health, education, sustainability and transport between countries.

“This is the first strategic agreement of its kind in the field of artificial intelligence with a country with a leading economy,” said Minister Farkash HaCohen. “The agreement will serve the Israeli economy and will enable cooperation in groundbreaking areas.”