The war in Ukraine: “Failed to conquer, so destroy buildings” 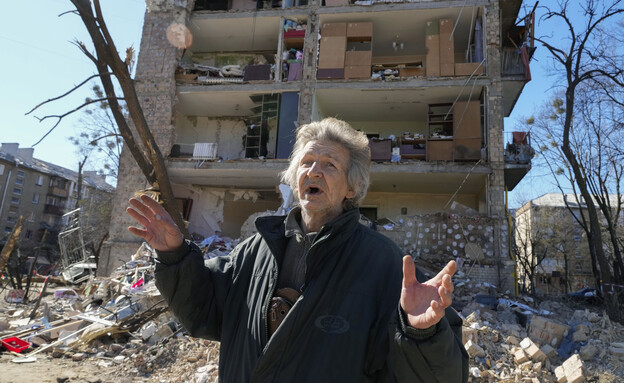 The main cities in Ukraine that are facing attempts by the Russian army to occupy them are hit daily by artillery fire. Mariupol, the port city that has been under Russian siege for more than two weeks, has become a heap of swords. According to reports, every 10 minutes a bomb falls in the city. The cities of Rubizhna and Kharkov are also under constant shelling and according to local authorities the number of civilians killed continues to rise.”The enemy was unable to carry out Rubizna’s ‘blitzkrieg’ (lightning war), so they are destroying the town, targeting hospitals, schools and residential buildings,” claims Serhiy Haidai, governor of the Luhansk region. He said emergency services and ambulances are often unable to reach the injured. He says that two days ago, 56 elderly people were killed after a Russian tank opened fire on a nursing home.

Kharkiv Oblast Governor Ola Sinaihov says the city has been shelled 84 times in one night and that there is an increase in the number of attacks on the city. Kharkiv, the second largest city in Ukraine, is located close to the Russian border and is a major target for Putin’s invading forces. According to Sinihov, the remote residential neighborhoods are also receiving fire from Russian forces.

Kherson residents are not ready to get used to the Russian soldiers roaming the city streets. The Russian military was forced to use stun grenades and gunfire to disperse residents’ protests. Documents uploaded to social media show hundreds of protesters gathering in Kherson’s “Freedom Square” – and fleeing after the Russians open fire on them.

Kherson, a city of about 250,000 people, was the first major urban center to fall to Russian soldiers after invading Ukraine almost a month ago. Since then, groups of residents have been holding regular protest rallies in the city center, where they are protesting against the occupation and expressing support for the government in Kiev while waving Ukrainian flags.

Russia’s National Guard soldiers have reportedly arrested more than 400 people in the Kherson region for protesting against the occupation. A Kherson resident wrote to the British Guardian anonymously, accusing Russia of trying to establish a “police state” in the city. According to her, Kherson residents opposed attempts to declare the city a “People’s Republic” and claimed that a humanitarian catastrophe was taking place in the city after only pharmacies remained in the pharmacies.

“Now we personally know our heroes and our traitors,” she wrote of someone who is collaborating with the Russian regime. “The Russian soldier is a fascist occupier. There is no Kherson People’s Republic here and there never will be.” She added: “No one canceled the farming season. Although there is not enough fuel, but the tractors went out to plow the fields – with Ukrainian flags! Among the enemy tanks. This people is invincible.”

The port city of Odessa in southern Ukraine is marked as one of the next targets of the Russian offensive. The Ukrainian telegram channels are proud that they managed to repel the “men of the Russian naval units who intended to storm the city of Odessa.” According to a spokesman for the headquarters of the Ukrainian army in the region, “the marines that were supposed to land on the shores of Odessa have been destroyed and are now rotting near Mykolaiv and Mariupol. The remains [של אותן יחידות] Will feed the Black Sea fish. That will be the fate of every intruder. ”

Last night two Russian ships bombed the shores of Odessa and caused damage to several private households and a high-rise building – no casualties were reported. Ukraine’s armed forces returned fire. The Russian intelligence agency claimed last night that the Ukrainians were laying dangerous mines in the Black Sea and hundreds of them – were swept into the depths of the sea.

The Black Sea is a major artery for exports and imports from Ukraine, and Odessa is the port from which the products arrive. In Ukraine it is claimed that Russia’s declarations are intended to provide an excuse for the entry of forces. Odessa Ukrainian MP Oleksi Honcharenko told the BBC today: “We clearly understand that Odessa is a strategic target of this war, but the Russian army can not invade there, our army is holding out.” Another MP, said: “The Russians are planning a ground operation against Odessa. We see their ships full of marines. I think the idea is to attack Odessa from several targets.”

17:27: A senior U.S. Department of Defense official said that “the United States has not seen any concrete indication of the use of Russian chemical or biological weapons in Ukraine.”

17:21: The chairman of the International Monetary Fund warns of the consequences of the war: “War in Ukraine means famine in Africa.”

17:06: The German parliament held a minute of silence in memory of Boris Rumchenko, a 96-year-old Holocaust survivor who survived the Nazi concentration camps but was killed during the shelling on the Kharkov mainland. The British prime minister described his death as “a shocking tragedy. Boris survived four concentration camps and devoted his life to ensuring that the horrors of Nazism did not recur.”

Boris Romantschenko, 96, who survived the Nazi Holocaust during World War II has been killed during shelling in his apartment block in the eastern city of Kharkiv.

17:01: The Deputy Prime Minister of Ukraine claims that at least 100,000 citizens are trying to escape from the city of Mariupol but can not – due to the lack of safe corridors outside the besieged port city.

16:52: Manchester United pays tribute to a veteran fan and the founder of its Kiev fan club who was killed in Ukraine.

The United family joins our #KyivReds in mourning the sad loss of Aleksander Kukin.

May he rest in peace ❤

16:32: The United States Embassy in Kiev tweeted a statement from the Ukrainian Foreign Ministry stating that Russia had abducted 2,389 children from the Donetsk and Luhansk regions.

According to the Ukrainian Foreign Ministry, Russian forces have illegally removed 2,389 Ukrainian children from Donetsk and Luhanks oblasts to Russia. This is not assistance. It is kidnapping.

16:27: Poland demands to keep Russia out of the G-20 international forum.

16:23: Ireland is expected to absorb some 40,000 Ukrainian refugees by the end of April, the country’s deputy prime minister said.

16:21: A spokesman for the Ukrainian Foreign Ministry claims that some 300,000 people in occupied Kherson are left without food and medical supplies, after Russia prevented them from evacuating. “Kherson citizens are facing a humanitarian catastrophe because of the siege of the Russian army. Food and medical supplies have almost run out, and yet Russia refuses to open humanitarian corridors to evacuate civilians.”

Kherson’s 300k citizens face a humanitarian catastrophe owing to the Russian army’s blockade. Food and medical supplies have almost run out, yet Russia refuses to open humanitarian corridors to evacuate civilians. Russia’s barbaric tactics must be stopped before it is too late!

16:19: Ukrainian President Zelesnkyy attacks the West: “How many more people need to die for Western leaders and NATO to ban Russia from flying or provide us with the aircraft we desperately need?”.