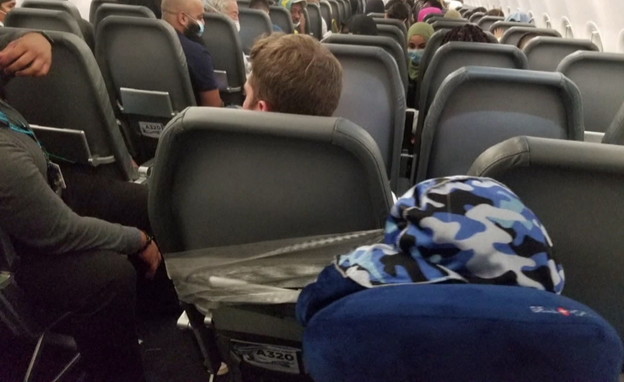 “I’ve never seen anyone hurt like that”: Maxwell Berry, a 22.year.old American, was documented attacking one of the flight attendants on a Frontier Airlines flight – then the crew handcuffed him to his seat with masking tape. According to the testimonies, he ordered 3 alcoholic beverages and at one point harassed 2 flight attendants.

In the case file, which went viral on social media, Berry, who police said was drunk, cursed at the other passengers and crew. He shouted, among other things, that his parents were “worth two million dollars in fucking money.” At one point – he punched one of the flight attendants – so the team decided to handcuff him to his place on a masking tape. He remained that way until landing – then arrested by the authorities. An indictment was filed against Berry, however the air crew handling the case was also suspended due to the deviation from the manner in which the case was handled.

The union also said that the incident was just another example of hostility faced by airline crews since the removal of most of the flight restrictions after the corona year. The incident on Saturday is the latest in a string of complaints filed by airlines to the Federal Aviation Administration (FAA) about rioting passengers, who have suffered heavy fines due to flight disruptions.