Could the crackdown on kleptocrats help Ukraine? 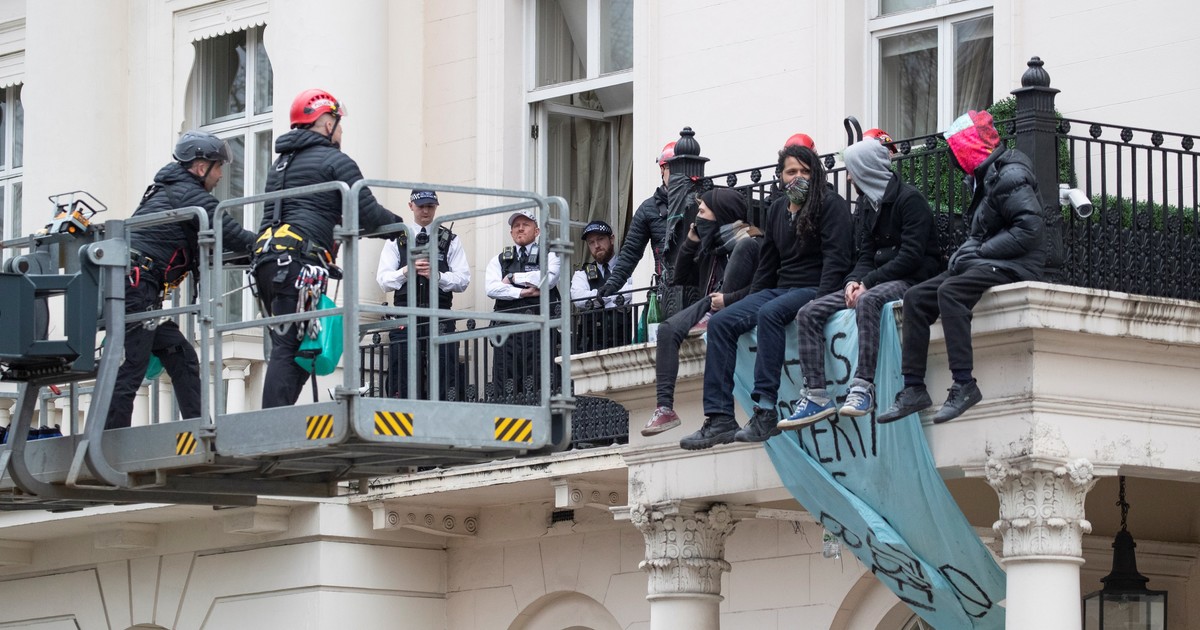 Can sanctions put that pressure back on him?

If you were making a TV show about Britain’s complicated relationship with the Kremlin’s allied oligarchs and their money, last week’s scenes at 5 Belgrave Square in London would have been perfect for a cold opening.

Scheherazade, one of the world’s largest and most expensive yachts allegedly linked to Russian billionaires, is moored in the port of the small Italian town of Marina di Carrara. REUTERS/Jennifer Lorenzini

The square is one of the most luxurious addresses in London, once home to British aristocrats and captains of industry.

It usually has the atmosphere of Calm down buffer found in neighborhoods whose wealthy residents are rarely home.

But earlier last week that silence was broken by activists dressed in black who occupied the cream-colored mansion at No. 5 and hung protest banners from the front balcony.

They proclaimed that they were seizing the house, which allegedly belongs to a Kremlin-allied aluminum tycoon named Oleg Deripaskaon behalf of Ukrainian refugees.

Police soon arrived to evict them, in a show of force that many observers found ironic.

“There must have been 20 police officers outside the anarchist-occupied Belgrave Square property, which I estimate to be around 20 more than ever verified the provenance of the money that bought it,” Oliver Bullough, British author and journalist known for his investigations into corruption. , he wrote on Twitter.

The protest was a rare public outburst of a long-simmering struggle over London’s status as a place where people like Deripaska, who acquired great wealth through their dealings with corrupt post-Soviet governments, could launder their money and its reputation without encountering inconvenient scrutiny from government and regulators.

For years, anti-corruption experts have warned that accepting money from these individuals, often referred to as “kleptocrats,” threatened British democracy and supported hostile autocratic regimes abroad, including in Russia.

But many of London’s law firms, estate agents, charities and politicians greeted the kleptocrats with the open arms.

Now, after the Russian invasion of Ukraine, that has changed.

Public opinion has hardened against anyone associated with Putin.

The British government is cracking down, imposing sanctions on Deripaska, along with hundreds of others it described as Putin’s oligarchs, political allies or propagandists, in an effort to isolate the Russian president from elite support.

But, experts say, it may be too littletoo late.

‘Ten years ago, the situation was different’

Trying to analyze the relations between the British elite and the Russian oligarchs, or between those oligarchs and the Kremlin, can seem a bit like looking at a pointillist painting.

Up close, any individual relationship or contact can seem ambiguous.

British politicians, businesses and charities tend to insist that their contacts with wealthy Russians are merely business dealings or personal friendships.

And Russian elites in London often bristle at claims that they might act on behalf of the Kremlin.

In many cases, such defenses are probably true.

But if you step back and take a broader look, a picture begins to take shape.

“Russian elite ties to the UK, especially when it comes to business and investment, provide access to UK business and political figures and thus a means for a extensive russian influence in the UK,” stated a 2020 report from the British Parliament’s Intelligence and Management Department.

“To some extent this cannot be unraveled and the priority now has to be mitigating risk.”

The time for prevention, experts say, was long ago.

At the time, Russian ties to elite British institutions were less widespread and suspicious assets were laundered and less thoroughly concealed.

“The time to crack down on kleptocratic money in the West was 15 years ago,” when the flow of money into Britain began to increase, said David Szakonyi, a political scientist at George Washington University and co-founder of the Anti-Western Data Initiative. Corruption.

Now, he questions whether regulators will even be able to find assets belonging to sanctioned persons, much less freezing or seizing them.

Starting earlier would also have given the crackdown a greater chance of altering the course of Putin’s rule, said Tena Prelec, a researcher at the London School of Economics who studies corruption and the rule of law in post-Soviet countries.

“It takes time for authoritarianism to crystallize. Ten years ago, the situation in Russia was different,” he said.

“In these 10 years, you had a situation where Putin has been able to suppress the opposition in such a firm way that now there are fewer opportunities for internal protests.”

It is impossible to say, in hindsight, whether a crackdown on kleptocratic assets would have interrupted that authoritarian turn.

But dissatisfied business elites are often a source of support
for opposition movements, said Erica De Bruin, a political scientist at Hamilton College.

If they back opposition candidates in elections, that can cause a regime change even in partially authoritarian systems.

Now, however, Putin’s level of political control makes that much less likely.

All eyes on the elites.

But could the assets of Russian elites in Britain and the channels of influence into British institutions that the Kremlin enjoyed as a result of those connections be invested and used as a weapon against Putin?

In recent weeks, Britain has imposed sanctions on Deripaska and other oligarchs as part of a wide-ranging set of measures aimed at crippling Russia’s economy.

The idea that sanctions on elites could influence Putin is theoretically plausible.

Most dictators are overthrown by former allies of their own governments, so undermining elite support can be a powerful means of influencing or weakening a hostile regime.

If the sanctionIf they helped spark a rift between Putin and the elites he relies on to hold and wield power, that could affect his ability to wage war in Ukraine, or even the stability of his presidency.

In practice, however, individual sanctions are unlikely to have that effect. effect, experts say.

oligarchs like Deripaska, Roman Abramovich and Mikhail Fridman they are high-profile, but they made a fortune in the era of Putin’s predecessor, Boris Yeltsinand they were never part of Putin’s inner circle.

“Over the last few weeks I have convinced myself that this is as weak as the Yeltsin-era oligarchs have been in the post-Soviet era,” Szakonyi said.

“When they are brought up for Putin in large gatherings, it is more like a show, to signal to the broader economic community that these oligarchs are with Putin. I really discount its ability to limit any foreign policy decisions.”

Rather, the core of Putin’s ruling coalition is made up of the “siloviki“, a group of officials who came to politics after serving in the KGB or other security services, and who now hold key positions in Russia’s intelligence services, army and other ministries, said Maria Popova, a political scientist at the McGill University studying authoritarianism in post-Soviet countries.

As with the oligarchs of the Yeltsin era, many of the siloviki have become extremely rich as a result of his ties to the government.

But because they are so closely tied to Putin, the loss of their assets in the West is unlikely to have an immediate effect on their loyalty.

Putin still has the power to distribute favors and assets within Russia, Szakonyi said.

And his elite allies are probably worried that if Putin’s government were to fall, his successor would expropriate the wealth of the previous ruling class.

“There is a lot of understanding that anyone who replaces Putin would potentially go after Putin’s friends and family,” he said.

The most important question for elite loyalty to Putin and the long-term stability of his government is what will happen as the pain of broader sanctions against the Russian economy grows.

Mass unrest, if it occurs, may cause elites to question the wisdom of remaining loyal to the government, particularly if they fear being scapegoated for its causes, or that they will not be protected from prosecution for suppressing popular protests.

But that prospect remains remote for now.

“We’re not going to see a revolution or an uprising any time soon,” said Noah Buckley, a political scientist at Trinity College Dublin who studies authoritarian politics.

“But the crisis hasn’t really hit Russia yet. It remains to be seen how far that discontent will go, which I have to assume it will go to.”