Russian media: “There is no war, but nuclear bombs on the way to Europe” 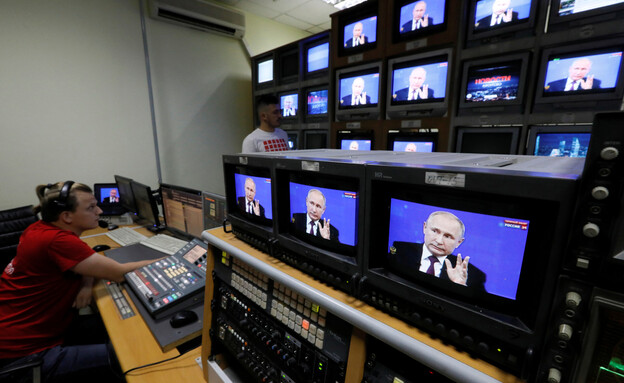 “When the Ukrainian shooting stopped, the inhabitants of Mariupol came out of the basements,” “Ukrainian forces were ordered to destroy the city before the withdrawal,” and “Europe suffocates from the sanctions it itself imposed” are headlines one might think of from a science fiction movie. But these are not fabricated reports, but coverage of the war in Ukraine as presented in the mainstream media in Russia.As stated by Russian President Vladimir Putin, as early as February 24, the day the fighting began, Russian military operations in Ukraine should not be called “war.” Violators of the law may receive a prison sentence of 3 to 15 years in prison – depending on the severity of the acts. So far the Kremlin has reported on decisions to block several dozen sites due to the dissemination of “disinformation”, including Western media, Google News and the social network Instagram. Along with the many journalists who fled Russia, there was also a brave one, Marina Obsyanikova, who decided to protest against the first Russian channel where she works, and broke into the broadcast with the sign “No to War.”

So what can be reported about what is happening across the border with Ukraine? The same things – but upside down. There are some powerful narratives that look beyond the TV screens of Russian viewers, and the main one of which is related to the actions that the Russians are doing to save the people of Ukraine. For example, the main news broadcaster of the First Russian Channel opened with an article about a family from the village of Rovzheno in Lugansk, who escaped the fighting in Russian territory. Reports of course emphasize that this is a village from the People’s Republic of Lugansk and not in Ukrainian territory, since, the Russians have recognized the declaration of independence of the province by about a month.

In addition, the Russians continue to demonize the Ukrainians also in everything related to Mariupol, one of the cities that have been at the center of hostilities in recent days. The Russians have surrounded it and shelled it incessantly, and many international organizations say that humanitarian aid cannot be transferred to a city that desperately needs it. However, the main edition of Channel One claims that the Ukrainians are the ones responsible for the attacks in the city, and the Russians are the ones who save the inhabitants of Mariupol: “The Ukrainian forces shoot at inhabited houses. “The humanitarian corridors towards Russia are a good option.”

Beyond that, the Russians even report orders given to the Ukrainian army, but prefer to quote rumors told by Mariupol residents, rather than reliable sources. For example, the Russian channel continued to report that “residents say that Ukrainian forces were ordered to completely destroy the city before they withdrew from it. The Russian Defense Ministry announced that Kyiv had told its nationalists who were in Mariupol to commit suicide.”

When it comes to Russian military operations inside Ukraine, Russian journalists are careful to stick to the Kremlin’s messages, which frame it as a “military operation to protect the Donbas.” The Russians claim to have attacked the Kiev shopping center earlier this week because it served the Ukrainians as a weapons depot. The first Russian channel used a video released by the Ukrainian security forces in which a Kyiv resident was seen “admitting” that he revealed the location of the weapons depot in a video to Tiktok. In practice, the Ukrainian forces published the conversation with the guy in order to deter the Ukrainians from exposing the actions of the Russian army inside Ukraine, so as not to inform the enemy about the harm to his targets in Ukraine.

Russian narratives also do not miss the Russian websites that support the Kremlin, and spread its messages to the whole world. The largest Russian news agency, Ria Novosti, have chosen to display on their home page commentary columns that further inflame the fire. For example, a column on Russian operational activity is entitled “Nazi Ukrainian Prisoners Can Tell Many Things.” The headline of another column dealing with the confiscation of the property of the Russian billionaires who entered the list of sanctions is: “The West remembers its pirate past.”

In the West, these headlines have been viewed with suspicion for a long time. Most of the free media in Russia have been shut down and no reports can be received that look critically at the events in Ukraine. Now is the time to act: after YouTube blocked the possibility of watching Russian content that distorts violence, the international news agency Reuters decided to stop relying on Tassas, the state-run Russian news agency, and from now on it will no longer feature news from the Russian agency.

Russian current affairs programs also feature a vocal orchestra in favor of Russia’s actions in Ukraine. One of Russia’s main commentary programs is an “evening” with Vladimir Slovyev, a journalist who has even been sanctioned for his extremist statements and in the past week commentators on the program have attacked Europe on several fronts. One commentator warned the continent against a Russian nuclear attack, and Soloviev himself said: “If you think Russia will stop in Ukraine – you are wrong. Ukraine is just the beginning.”

On Tuesday they went through a plan to critique European economic policy, using the narrative that the West had created a conspiracy against Russia. “Europe is suffocating from its sanctions, even without the sanctions it was difficult for them. They came out of the corona, and they have a lot of problems of their own. They caused inflation, and suddenly the Russians come, and now it’s convenient to suddenly blame someone else for all your problems,” Soloviev said. His plan also downplays how the West treats Russian culture, and attacks Europe and the Americans for the cynical use, he claims, made of the letter WITH Marking the Russian forces in Ukraine. “Maybe they’ll take the letter out of their lexicon WITH. Maybe they will cancel the movie ‘Zoro’, what a beautiful idea. Also the signal V They have to cancel – then everything will work out for them. ”

The audience in Israel as well as in the West is immune to the messages coming from the Kremlin, as they go through the critical journalistic strainer. At the same time, reports from Ukrainian sources are examined and qualified: for example, Ukraine reported an attack on a military training base near Lvov, noting that the attack took place “on the NATO border”. The Russians do not intend to stop in Ukraine, and are already flocking to European definitions. And yet, compared to these audiences, the Russians have no one to filter the news for them, or re-frame it.