In the shadow of a shattered economy and quite a few crises: Raisi enters the position of president — 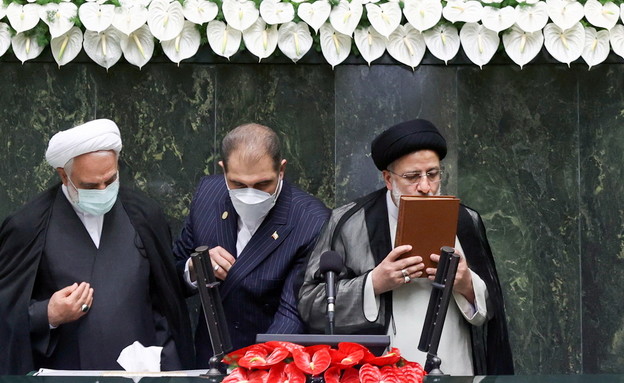 About a month after he was elected, Ibrahim Raisi was sworn in today (Thursday) as President of the Islamic Republic. After eight years of relatively moderate administration led by Rouhani from the reformist camp, Iran has entered a new and tougher era in which it has the power to herald changes in policy at home and abroad.

Raisi, a former judge, an extremist conservative leader whose views are entirely in line with those of the country’s most powerful religious leaders, took office at a critical time. Iran is in talks with the United States to revive the nuclear deal, and Raisi is also required to revive his country’s economy, which has been hit in recent years by sanctions from the previous US administration.

At a ceremony held earlier this week, Iran’s supreme leader and leader, Khamenei, praised the incoming administration, while the outgoing president, who belongs to the second camp, sat quietly watching from the sidelines. “In the transfer of power, we are promoting new ideas and determination,” Khamenei said. “This is a source of hope for anyone who is motivated to serve the entire country and the youth in particular.”

The election process that brought Raisi to office was characterized by a low turnout on a historic scale and was accompanied by criticism of restrictions, after a panel of clerics and jurists prevented key reformist candidates from running in the election, with the aim of bringing about Raisi’s victory. The new president also has a strong majority in the Iranian parliament, which will allow him to quickly advance legislation that could lead to change. “He has unity within the three branches of government, and there is no need to worry about internal competition limiting him,” Fouad Izadi, a professor at Tehran University, told CNN.

In the streets of Tehran themselves one can notice a mixture of indifference, a little hope and a lot of pessimism in the air with the swearing in of the new president. Some residents hope the Raissi administration will ease sanctions that weigh heavily on the Iranian economy but most others do not expect the situation to improve. Raisi’s views and attitudes towards other countries may cause the sanctions to remain in place or even intensify. However, Raisi, 60, has vowed to take steps to lift sanctions that have halted Iran’s oil exports and hurt the banking system.

Raisi has confirmed the continued existence of the nuclear talks but he supports a tougher line in the talks that have been cut off in recent weeks. Raisi himself is under personal sanctions in the U.S. following allegations of human rights violations when he was a judge. Ali, a businessman in Tehran, told Reuters: “Honestly, I have no hope. ‘Hope’ as they call it, actually caused us to lose hope. “I doubt Mr Raisi can do anything about the problems that have been caused to people as a result of the sanctions and the economic pressure.“

An unnamed friend added: “This economic pressure has been particularly severe for us young people. Especially those who have recently married, like me, and can not even afford to eat properly, let alone the desire to start a family. The first thing I really want from the president is to ease the economic pressure “Life has become very difficult.” A bus passenger said: “I think he has a lot of enemies and he will not be able to overcome them. The power taken from our country in the last eight years – will return.“

The most significant change could happen in Iran’s economic policy. Rouhani has been keen to open up Iran to foreign investment and attract companies from the West, but Raisi supports the idea of ​​a “resistance economy” – he seeks to turn Iran’s economy into an economy independent of external forces so that it can better deal with international sanctions while cultivating homemade industries –

Dr Sid Mustafa Kushchem, a political analyst in Tehran, told CNN that Rouhani’s belief in improving relations with the West, even after the Trump administration began its maximum pressure campaign, was perhaps his biggest mistake. But despite Raisi’s plans, At least some of the sanctions against Iran are the key to economic change.