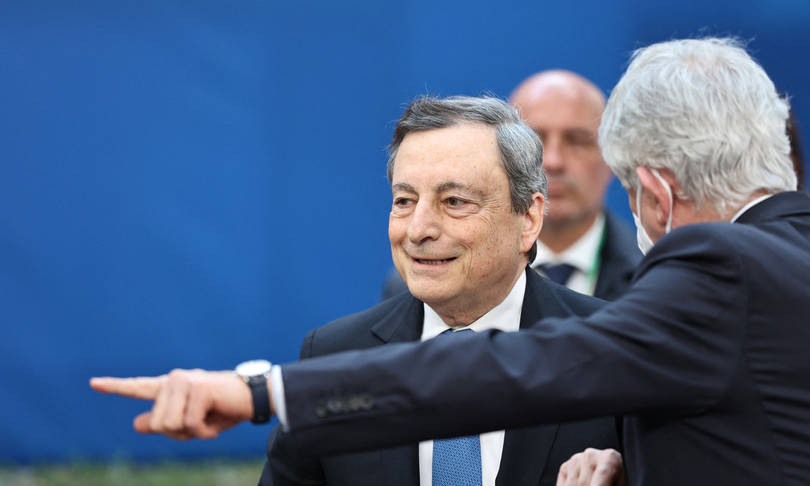 The European Council’s decision and Mario Draghi’s words have dominated the politics pages of the major Italian newspapers. There is also room for a statement on the Russian ambassador Sergey Razov’s complaint to the Public Prosecutor’s Office in Rome against the ‘Press,’ as well as a discussion among the majority on the Ukrainian decree and the problem of increasing military spending to 2% of GDP.

A gas agreement between Europe and the United States. Yes, from the EU, common buying. Draghi: I’m searching for peace, and I’ll talk to Putin about it. Then he addresses the parties, saying, “No to recriminations.” The prime minister expresses gratitude to Pope Francis, saying, “We are all striving for peace, but there has been no intention of working toward a ceasefire so far.” The Russian envoy went to the prosecutor’s office to express his displeasure with media publications. The enticement to commit a crime, as well as the condemnation of a crime, are both challenged by Razov. The director of the ‘Stampa’ is outraged.

“He is a diplomat from a country where the media are not free,” it says of Draghi. Military spending is at an all-time high among the split allies. On Monday, there will be a majority meeting on the Ukraine decree. On the FdI agenda, the dread of divisions. Conte: The government is paying attention to us. Draghi, on the other hand, maintains his position. Di Maio distances himself from the M5s leader, a position on weaponry that is unacceptable. “Europe’s climate ambitions must be revised to help industries in crisis, with we Conservatives at the lead for the true refugees,” Giorgia Meloni said.

ECB President Mario Draghi: “On the gas front, progress is being made, but opinions are mixed on the price. I’m seeking for peace, and I’m going to listen to the Kremlin “.. Okay for everyday purchases, but Europe is divided on gas prices. The past resurfaces, with pro-Moscow motions that embarrass the League and M5s: the current Undersecretary of State for Foreign Affairs and NATO delegate signed one to leave the Alliance. To assist Russia, agreements, funds, and parliamentary measures have been made. La Stampà, “Illiberali” Dragons are denounced by the Russian ambassador. The atlantist Giorgia, Meloni’s metamorphoses from sovereignist to Aspen Institute partner, then the missions in Brussels and the United States

The ‘Press’ has been attacked. Dragons are unacceptably dangerous. The first is: “Because there is no press freedom in Moscow, it’s no wonder that the ambassador is agitated. We live better in Italy because we have the Constitution “.. “No to censorship,” says Di Maio. “Support for the director and journalists,” Letta says. The Nordics are in Draghi’s sights at the European Council: “Too much profits on methane.” The prime minister wants a deal in May for 150 billion dollars in Norwegian gas.

“They will respond to their consciences,” Lega and the 5 stars are told. Draghi is now evaluating trust as a result of the tensions over military spending. Conte is undeterred: “We are not terrified of the bugbear of the government’s fall.” Letta is looking for a text agreement but is willing to break with the ally. Todde, M5s vice president: “We will not turn off the power, but Italy has other concerns. There will be no ambiguity on our part. There’s a chance we’ll have to ration gas next winter “..

Draghi’s proposal for energy is “immediately the regasifiers.” Within two weeks, the project will be completed, with new structures and connectivity to European networks. Norway is opposed to the first deal on EU joint purchasing because of a price stalemate. Pierferdinando Casini is interviewed: “Kiev is fighting for us as well, having been born strong in order to achieve peace. Ukraine, Europe’s frontier, defends our liberty and democracy. It has to be aided. Do not continue to close your eyes to Putin, a collective mistake: he is an assailant who must be stopped. Do Salvini and Conte oppose arms? Rather than confronting reality, they tend to their own garden “..

The traditional Europe is no longer a mirage. At the price of gas, there was black smoke between 27 on the roof. “Too many resistances,” Draghi says. The prime, on the other hand, envisions a deal in May. “Bite the hand of those who supported you,” the Russian envoy warns Italy. “Instigates murder,” said ‘La Stampa.’ The chief of Russian diplomacy in Italy, who distributes dossiers to senators, is a talented weaver of political relations: the meetings with Salvini and the M5s. The Meloni trap in Ukraine has sent the 5 stars on the ‘n’ to military spending haywire. An agenda on the government’s pledge has been set in the Senate, but the grillini are ready to turn around. Fausto Bertinotti is interviewed: “The left has become pro-NATO, with Bergoglio standing alone as a pacifist. I perceive a single thought of rearmament in Parliament. What is the PCI? It was unbiased “..

Arms dealers receive a VAT reduction. While Moscow was hitting, Draghi delivered a 2019 EU directive to the Chambers: tax and excise duty preferential treatment. For Tg1 and the journaloni, Bergoglio is irrelevant in the face of the rearmament maniacs. Massimo Pagliarulo, president of the Anpi, was interviewed: “They employ Segre against the Anpi, so we’re not equidistant.” From Calenda to the left, the wide field of Letta ‘vasa vasà, an ally of everyone.

Profiteers from war. Rain of bogus files on Salvini and the Russians, according to the left jackal. Politicians and red media, as with Covid, take advantage of the crisis to attack the League. The Conte government had said ‘yes’ to more arms spending. Premier encircled, the alliance’s outstanding maneuvers against SuperMario. The majority of people are opposed to increased military spending. Zingaretti: With the grillini, we need to find a middle ground. To avert slippage, the Senate passed a motion. “I’m searching for peace,” Draghi said. “I’ll talk to Putin.” Stay at home, says the government’s anti-nuclear strategy. In the event of an attack, the latest instructions are to take iodine to combat the effects of radiation and to stay indoors and sealed to avoid inhaling polluted air.

Some foods may be forbidden from being sold. Russia is now condemning Italy. “We constructed bridges, then everything was turned upside down,” says Ambassador Razov. He also files a lawsuit against La Stampà for a “hostile” title. The Sicilian laboratory is administrative. The Azzurri are not conquered by Salvini’s listonè. In light of the Regionals, the Northern League leader’s ‘First Italy’ idea has the support of the UDC and the autonomists, but the ‘nay’ of FdI and a substantial portion of FI. The mayor of Venice, Luigi Brugnaro, has been admitted to the hospital due to sickness. On the CSM, there is still a tug-of-war, this time over the Cartabia reform: the center-right supports the togati draw, while the Democratic Party opposes it.

The EU has pledged to buying gas from the United States, but this will not be enough to free us from the Tsar. Draghi wrestles with the numbers before declaring, “I’ll talk to Putin.” In the instance of Colombia, D’Alema’s idea to keep the government out was to use his previous experience as foreign minister to conduct the armament talks through unofficial diplomatic channels. “We were not aware of the conversations with the feluccas,” the Farnesina said. If Bersani follows the militarist approach, the left’s pacifism will crumble. “Cynical to ask for surrender, I witness meaningless rearmament debates,” said the father of Article One.