Allies promise tougher stance, but run out of tactics 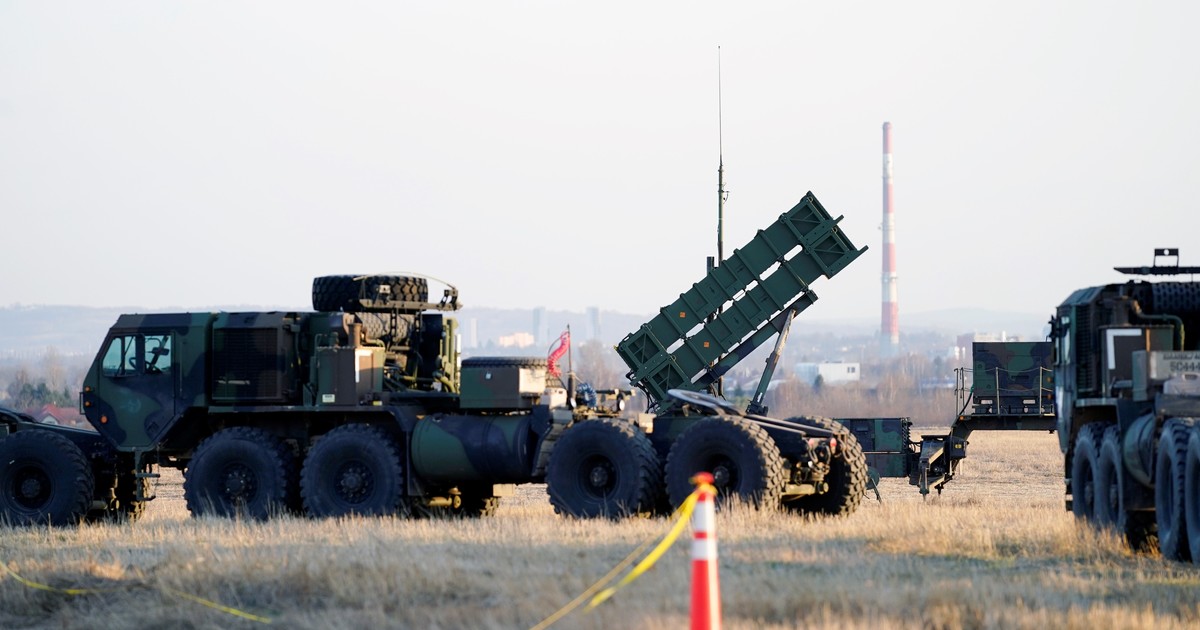 US President Joe Biden and leaders from more than 30 countries met Thursday to show united opposition to Russia’s invasion of Ukraine and announce new economic sanctions, aid for refugees, deployment of military in Eastern Europe and the grim preparations in case Russia uses chemical, biological or nuclear weapons.

But the historic gathering of world leaders in a series of three summits on Thursday underscored that the United States and its allies are somewhat have reached self-imposed limits in crafting a united global response to the largest European conflict in more than half a century. Although they are sharpening the tools they use against Russia, they seem to have little news to fall back on.

Biden and his allies have moved with unexpected speed and authority in the past four weeks, uniting much of the world against Russian President Vladimir Putin.

And yet the feeling stagnation on the battlefield it is now also felt in the corridors of diplomacy, where it is difficult to take further drastic measures to counter Putin’s aggression.

The Europeans have said they are unwilling to bear the consequences of new limits on the Russian energy on which they depend. And Biden has said that is not willing to send troops to Ukraine and risk going to war with Russia.

As allied leaders met in Brussels, the Ukrainian military, entering the second week of its counteroffensive, claimed Thursday to have destroyed a Russian military landing ship in the southern port of Berdyansk. In besieged cities surrounding the capital kyiv, heavy fighting had sparked so many fires on Thursday that the city was shrouded in a ghostly haze of white smoke.

Biden said that the United States would accept 100,000 Ukrainian refugees, and he and his peers announced a new round of arms shipments to Ukraine, but not the fighter jets that President Volodymyr Zelensky has ordered.

They unanimously expressed their “firm resolve to counter Russia’s attempts to destroy the foundations of international security and stability.” But again refused to impose a no-fly zone in the skies over Ukraine, which would mean being willing to shoot down Russian planes.

They promised to tighten sanctions on Russia, but the Europeans stopped short of suspending imports of Russian oil and gas, as the United States has done. Europe relies heavily on Russian energy, which provides Putin with the huge revenues he needs to support his military and gives him the power to wreak havoc in Europe with supply disruption.

“I think we’re seeing a coordinated divergence between the European Union and the United States,” said Mujtaba Rahman, the Eurasia Group’s managing director for Europe. “There’s no break, not even a split. Rather, there is an agreement that the US will be more aggressive than the EU because it can afford it.”

Speaking to reporters Thursday night, Biden said he had requested the emergency meetings – with the leaders of NATO, the European Union and the Group of 7 industrialized countries – to show Putin that allies will not “fracture” in their determination to maintain economic pressure on Russia for days, weeks, months and more.

“We have to remain fully, totally and completely united,” he said, adding that he is in favor of expelling Russia from the Group of 20 industrialized and developing countries.

However, for Zelensky, none of this was enough. He has become more scathing in his criticism of Western curtailment of military aid as forces Russians attack Ukrainian cities and townsespecially in the south.

Speaking by video to NATO leaders behind closed doors, Zelensky thanked them for their support but chided them for not doing more. He said that his battered country, which is not a member of NATO, is trapped “in the ‘gray area’ between the West and Russiaaccording to a transcript released by the Ukrainian government.

“On February 24 I addressed you with a perfectly clear and logical request that you help us close our skies,” he said of his request for a no-fly zone over Ukraine to keep out Russian planes. “In any format. Protect our people from Russian bombs and missiles. We haven’t heard a clear answer.”.

“And you see the consequences today,” he added a moment later. “How many people died, how many peaceful cities were destroyed?” He repeated his call for warplanes, though the White House and the Pentagon have said providing them could give Russia a pretext to draw NATO into direct conflict. “They have thousands of fighter planes! But they haven’t given us any yet,” Zelensky said. “To save the people and our cities, Ukraine needs military help, without restrictions.”

For NATO leaders, how much was at stake at their meeting was made clear in the joint statement issued at the end. The alliance, with 72 years of existence, warned Russia not to deploy “chemical, biological and nuclear weapons” in Ukraine, which speaks to a growing concern that Putin is willing to use them to further his aggression or to falsely implicate the Ukrainian government.

Biden was cautious Thursday in answering questions about the warning. He declined to say whether the United States or NATO they would respond militarily if Russia were to use chemical weapons, which are prohibited by international treaties.

But warning of the threat of weapons of mass destruction, NATO Secretary-General Jens Stoltenberg said the organization was “intensifying allies’ preparedness and readiness for chemical, biological and nuclear threats.”

The organization will provide equipment for detection, protection and medical support to Ukraine, he added, as well as decontamination and crisis management training to deal with the impact of the use of weapons of mass destruction.

Stoltenberg noted that the use of such weapons inside Ukraine could contaminate neighboring NATO countries.

“Many fear that Russia uses such weapons and accuses Ukraine of having done so, so it is important to determine precisely who, where and when did it. so there is no ambiguitysaid Gustav Gressel, senior policy fellow at the European Council on Foreign Relations.

On Thursday, the United States imposed a new round of sanctions on Russia, targeting more than 300 members of their Parliament and dozens of defense companies, while restricting Russia’s ability to use its gold reserves to back its currency.

It also applied sanctions to Herman Gref, an ally of Putin and president of Sberbank, one of the largest banks in Russia; the bank itself was sanctioned last month.

The economic measures, which were taken in conjunction with new sanctions from Western allies, were the latest attempt to inflict economic pain on Putin.

The United States has also acted to reduce Russia’s ability to bypass restrictions weighing on the central bank and major financial institutions, in response to concerns that Russia has found ways to stabilize the ruble and rebuild its foreign exchange reserves.

The Treasury Department is eyeing alternative assets that Russia could use to support its economy. On Thursday, it issued new guidelines to make it clear that transactions related to the $130 billion gold reserves from Russia are also subject to US sanctions.

Russia has bolstered its gold reserves in recent years to cushion some of the impact of earlier sanctions, using the precious metal to buy foreign currency or guarantee loans.

The US is working to close that loophole by threatening sanctions to anyone who facilitates such transactions.

Biden and EU leaders are expected to announce a deal to supply significant amounts of liquefied natural gas American to Europe this year, according to two European diplomats. They said the shipments could limit Europe’s dependence on Russian energy in the short term and boost confidence in its ability to become less dependent over time.

“The question, of course, is not whether Europe has enough oil and gas for now, but what will happen next winter”said Jacob F. Kirkegaard, a senior fellow at the Peterson Institute for International Economics in Washington.

A senior government official said special efforts were being made to welcome Ukrainians who have relatives in the United States. 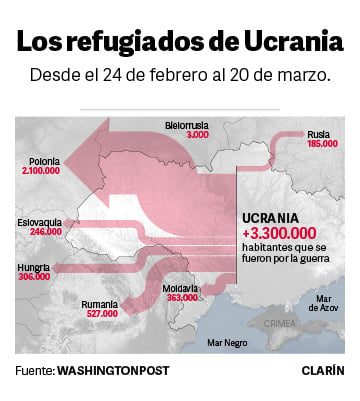 It is estimated that 4 million Ukrainians they have taken refuge in Poland and other countries as Putin’s forces bombard civilian areas across Ukraine. Biden’s commitment would significantly expand the role of the United States in managing the unfolding humanitarian crisis.

On the battlefields, Ukrainian fighters this week managed to drive much larger Moscow forces away from kyiv and other cities, according to Western intelligence agencies, even as the bloody siege of the port of Mariupol has intensified.

But many of the Ukrainian claims about progress have been impossible to verify, and brutal street fighting still rages in some towns that Ukrainian forces claim to have recaptured.

Russia did not immediately comment on Ukraine’s claim to have destroyed a warship in Berdyansk, whose port has been used by Moscow to send reinforcements to Mariupol and Ukraine’s eastern front.

But British and American officials confirmed that it was an attack by Ukrainian forces, and videos and photos reviewed by The New York Times confirmed that a Russian vessel was on fire in the port and showed smoke coming from others.

“The ship destroyed in Berdyansk could carry up to 20 tanks, 45 armored personnel carriers and 400 paratroopers“Ukrainian Deputy Defense Minister Anna Malyar said in a statement on Thursday. “This is a huge goal that was achieved by our armed forces.”

The United Nations said the war has forced more than 10 million Ukrainians, about a quarter of the population, from their homes, counting “internally displaced persons” who have fled to safer parts of the country: it is the largest Europe’s refugee crisis since World War II.

The UN children’s agency reported Thursday that there are 4.3 million children among them, more than half of minors in Ukraine.

On Friday, Biden traveled to Poland, in part to witness the tidal wave of people taking refuge there.