Thus in China children are enslaved to become Olympic champions 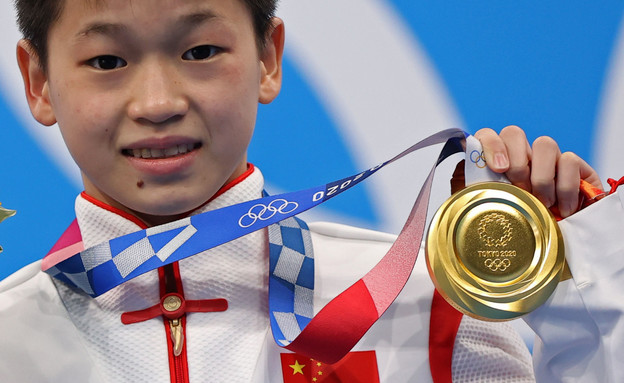 At the opening of the Tokyo Olympics, the chairman of the Chinese Olympic Committee said that “in China money and bronze are not counted.” China is for one purpose: to rake in gold medals for the glory of the Chinese nation–

At the beam exercise held this week at the gym in Tokyo, the world is thrilled to see Simon Bailes again, she thrilled viewers that she was back in competition after a past crisis and even managed to win a bronze medal. Those who defeated her were two Chinese gymnasts. The gold was taken by 16.year.old Guan Chenchen, who performed an almost perfect drill. After winning, the cameras captured a rather frightened, frightened girl who did not look happy or really aware of the class.

A look at the medal table leaves no doubt as to which nation is taking the Olympics most seriously. It’s true that China, with a population of 1.4 billion, has a pretty good chance that the world’s outstanding in a particular field will come from them, but the New York Times provides some examples that cast a heavy shadow over China’s medal factory.

Under the headline “The goal of the Chinese sports machine – as much gold as possible at all costs,” the New York Times revealed the extreme steps of the Chinese sports world, six days a week. First, weightlifter Ho Jihui, who since she was 12 has been enslaved for one purpose – to lift more than twice her body weight into the air. On Saturday, Ho’s efforts and dedication – separated from her family and suffering from almost constant pain – paid off. She won gold in a group of up to 49 kg and broke three Olympic records.

“We see athletes bursting into tears of happiness for third place from the House of Consolation – in China, silver and bronze are not really considered,” the head of the Chinese Olympic Committee said on the eve of the opening of the Games. “China aspires to be at the top of the gold medal table – even if it comes up in very extreme battles of athletes. We must firmly ensure that we are first in the gold medals.“

The Chinese system is reminiscent of the Soviet model. The state recruits tens of thousands of children for full.time coaching in more than 2,000 government.run sports schools. Beijing has also deliberately focused on less prominent sports, which do not receive funding in the West or on sports that offer a large number of Olympic gold medals. So it is no coincidence that almost 75% of the Olympic gold medals she has won since 1984 are in just six sports: table tennis, archery, diving, badminton, gymnastics and weightlifting. More than two.thirds of China’s gold medals came from women or girls, and almost 70% of the Chinese delegation were women.

Weightlifting for women, which has become an industry with medals at the 2000 Sydney Games, is an ideal destination for Beijing’s gold medal strategy. Sport is a secondary occupation in most of the athletic world, women in the West must strive and raise funding to achieve. Due to the number of weight allotments, the weightlifting provides 4 potential gold medals. For the Chinese Ministry of Sports, it does not matter that weightlifting does not interest many in the country or that teenage girls who entered the system – had no idea that such a sport even existed.

“The system is extremely effective,” the New York Times quoted Lee Howe, head of the weightlifting team at the 2016 Rio Olympics and director of the current Department of Drug Testing at Chinese Sports Centers. “That’s probably why our weightlifting is more advanced than other countries.“

The New York Times noted that most states yearn for Olympic glory, the United States and the Soviet Union even used games like a battlefield during the Cold War. But Beijing’s obsession with gold medals is tied to the founding of the People’s Republic of China in 1949 – a revolutionary force that turned centuries of decay and defeat from foreign powers. Chairman Mao, the leader of the Chinese Communist Revolution, wrote that “the sick man in Asia needs to develop his muscle.” For decades, boycotts and political conflicts have hampered Olympic achievements.

The work done after the disappointment in Rio and London

After rival Taiwan first competed in the Games as a Republic of China, Beijing boycotted the Summer Games until 1984. By 1988, China had already won 5 Olympic gold medals. After 20 years when China hosted the Games, it has already beaten the Americans in the number of gold medals. London 2012, was a disappointment and Rio 2016 an even bigger disappointment, where China came “only” in third place after the United States and Britain–

Right at the end of the games in Rio, the sportsmen decided to take action. Although a growing number of Chinese middle.class parents are unwilling to hand over their children to become athletes. Beijing continued production and began work plans on taekwondo, kayaking, boating and more. Boys who know how to balance balls on their palms were sent to bows, while country girls with long, big hands were directed to lift weights. “Children from rural areas or families in a not.so.good financial situation are adapting well to difficulties,” a sports official in China told the New York Times. Aside from women’s volleyball, China has never won Olympic gold in major team sports–

In Tokyo, the Chinese strategy has already yielded results. They are ranked first in the winnings table – although the athletes come after training and coaching in schools with not simple conditions. Some of the world champions who rush to be photographed with the flag, share dorm rooms with others and are lucky if they see the families several times a year. After the weightlifter Leo Chion competed in the 55kg weight class, a journalist from her home province was the one who sent her a message from her parents–

In 2017, after re.examining old specimens, three of the four gold medals of the weightlifters from China were eliminated at the 2008 Beijing Olympics. The tests found substances found in their bodies. In one case, a former Chinese athlete said she grew a beard following the drug regime that forced her to take over during her time as an athlete.

Lifting weights up to 55 kg, Leo walked with determination for more gold on Monday. In the final moments of the competition, her Philippine rival defeated her. Immediately afterwards, 26.year.old Leo stood crying breathlessly. Her coach wrapped his arm around her and sobbed. He, too, with red eyes crying, Leo answered questions from Chinese reporters.

“Money is a great achievement,” said one journalist. Leo looked at the floor “Today I did my best” and the tears kept flowing. She apologized for the injuries and pain she was suffering from and said “they have been there for years”. However, unlike Simon Bales or Naomi Osaka, Olympic champions who talked about emotional stress and pressure, Leo did not address the mental angle of what she had been doing, day after day, since she was a little girl.