The Russian withdrawal from kyiv, a strategy for a more brutal attack? 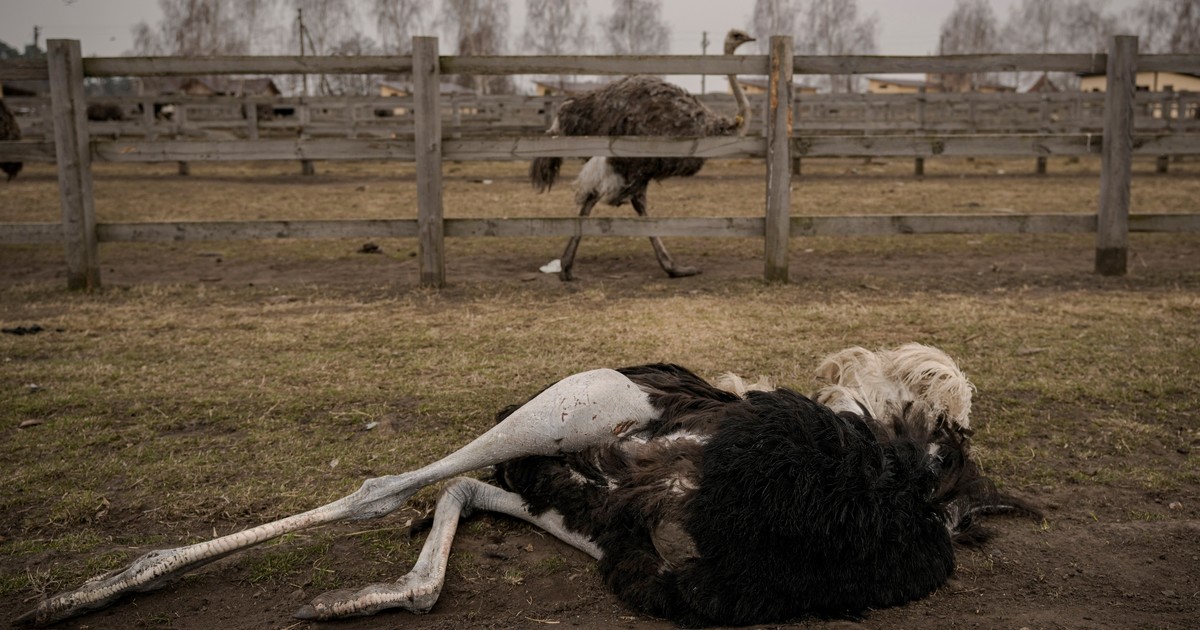 35 days after the war between Russia and Ukraine, the peace negotiations in Istanbul have already deflated once again and are viewed with mistrust by Ukraine and its allies. They believe that the Russian withdrawal from kyiv “is just a repositioning” for a more brutal attack.

When everyone was waiting for a statement on a ceasefire, the Kremlin retracted the commitments agreed in Istanbul, whose negotiations were chaired by Turkish President Recep Tayyip Erdogan.

“Nothing too promising in the peace talks,” Russian spokesman Dmitry Peskov said. But he promised an update later.

The Kremlin spokesman said “there is still a long period of work ahead.”

However, he welcomed the fact that “Ukraine has put in writing its demands for the end of the conflict”.

The latest round of peace talks on Tuesday had given cause for optimism, after Russia said it would “drastically cut” its military activity in kyiv and Chernikov “to build confidence”.

But Western and Ukrainian officials have been skeptical. Ukraine has said that the bombing continued in Chernikov “throughout the night”.

The Ukrainian governor of Donetsk reported that the Russians have shelled all the cities on the front line that separates the two sides. They also shelled the Luhansk region, where there were 35 artillery strikes in 24 hours.

“The danger is underestimating the Russians. Putin wants to destroy Ukraine. They continue to have an immense number of forces, ”he explained, dismissing the news of the withdrawal. The same attitude has the Pentagon. They both think that just “The Russians are repositioning their troops.”

Donbas distances himself from Putin

President Vladimir Putin had assured that it was in his interest to defend these pro-independence regions of eastern Ukraine. But the war has returned to the Russian speakers whom he claims to defend, in Ukrainian patriots in the face of the brutality of the Russian military offensive.

An interesting assessment by the former US ambassador to Russia, Professor Michael McFaul: he has suggested” that Vladimir Putin not in control of the situationas you would like people to believe.”

Russia said on Tuesday that it would “drastically reduce” its military operations around kyiv and Chernikov. Western officials have seen some evidence on the ground of troop withdrawal near the capital.

But on the battlefield it is the Ministry of Defense and the military forces that are in charge of the offensive and the FSB, the secret service that replaced the KGB.

There apparently the Ukrainians have a “mole”, which has reported in detail the assassination attempts on President Volodymyr Zelensky at the hands of Wagner’s mercenaries, former special forces working for Putin in Syria, Congo and Mali, and now displaced in eastern Ukraine.

This is due to the arrests ordered in the FSB service by Putin, who has two chiefs arrested along with 20 lower-ranking FSB officers, whose houses were raided.

A Ukrainian soldier stands on a destroyed Russian tank in Kharkov. Photo: AP

NGOs have difficulty entering Ukraine but Doctors Without Borders provides hospital kits and aid. There are more than 4 million Ukrainians who have fled the country as refugees, especially women, children and the elderly.

Mariupol is one of three areas where a humanitarian corridor was agreed on Wednesday, Ukraine’s Deputy Prime Minister Iryna Vereshchuk said. It is the Grozny of Ukraine.

The besieged southern port city has been under almost constant bombardment, with around 400,000 people trapped there.

Officials in Ukraine have said that a Red Cross facility in Mariupol has been hit in an airstrike.

Mariupol It is the martyr city of war. The humanitarian evacuations, which have been organized by Greece and France, have failed because the minimum security conditions do not exist for the escape of more than 100,000 people, especially the elderly and disabled, who have been trapped, without light, without food, without water and without heating or medicine.

Routes into and out of Melitopol will also be opened to allow people to leave and aid to enter, as will the roads between Enerhodar and Zaporizhzhia.

A thick column of smoke rises on the outskirts of kyiv. Photo: AP

“Convoys of buses and trucks with humanitarian aid have already left Zaporizhzhia,” he said in a video message on Wednesday.

“We demand that the occupation forces fulfill their commitments and allow the humanitarian columns to pass through the checkpoints,” he said.

The talks between Russia and Ukraine on Tuesday, March 29 in Istanbul were “substantial” and could lead to a meeting between Russian President Vladimir Putin and his Ukrainian counterpart to end the conflict that began more than a month ago, the negotiators of the Agreement estimated.

Progress in the negotiations could have military implications due to the nature of the Russian offensive in Ukraine. But Western countries do not believe Putin. they think it’s an excuse to equip, change strategy, supply the troops and reorganize. They expect a long and brutal war, more akin to Grozny in Chechnya.

A view shared by a dissident former Russian foreign minister, Andrei Kozyrev, who was Russia’s foreign minister from 1990 to 1996 and offered his analysis of Russia’s promise to scale back its military operation around kyiv and Chernikov.

Residents of Mariupol, among the ruins. Photo: Reuters

“The good news from the Russia-Ukraine talks in Istanbul is not that Putin suddenly acted in good faith, but that the heroic Ukrainian resistance is making him look for exit ramps and a diplomatic disguise”, he wrote on Twitter.

At the end of Tuesday’s diplomatic session, Russian Deputy Defense Minister Alexander Fomin announced that Moscow wanted to “radically reduce military activity in the direction of kyiv and Chernikov.”

Present in Istanbul, he said that it is a decision taken “to boost confidenceat a time when negotiations on an agreement on Ukraine’s neutrality and non-nuclear status are entering a practical dimension”.

On Friday, Moscow had announced its intention to concentrate its efforts on the “liberation of Donbas”.

After the announcement of these advances, which seem to mark a turning point in discussions between kyiv and MoscowThe United States expressed its doubts, through the voice of its Secretary of State, Antony Blinken.

“I have not seen nothing to suggest there is actual movement because we haven’t seen any sign of real seriousness from Russia,” he said on a visit to Morocco, during a press conference.

The demands to be neutral

In the negotiations in Istanbul, chaired by Erdogan and with the presence of Roman Abramovich, the oligarch who was poisoned when he was part of the Ukrainian negotiating group, Ukraine will accept “a neutral status in exchange for security guarantees.”

Neutrality would mean that kyiv will give up its union with the North Atlantic Treaty Organization (NATO), which it was a red line for moscow. Ukraine would also agree not to host foreign military bases and would adopt un status “no nuclear”. But he would ask for a change: that Western states guarantee their security. It could be part of the European Union.

Ukraine’s chief negotiator, David Arakhamia, clarified that kyiv was asking for an “international agreement”, signed by several guarantor countries, that they “will act in accordance with NATO Article 5 and even more firmly.”

Ukraine’s chief negotiator David Arakhamia clarified that kyiv was calling for an “international agreement” signed by several guarantor countries that “will act in accordance with NATO Article 5 and even more firmly.”

Arakhamia cited, among the countries that Ukraine would like to have as guarantors, the United States, China, France and Great Britain – permanent members of the United Nations (UN) Security Council – as well as Turkey, Germany, Poland and Israel.

kyiv proposes that these guarantees do not immediately cover Crimeaannexed by Russia in 2014, nor the territories under the control of pro-Russian separatists since 2014. These disputes must be the subject of negotiations separately.

To solve the specific problem of Crimea, kyiv proposes “fifteen years” of talks between Russia and Ukraine, according to another Ukrainian negotiator, Mykhaïlo Podoliak.

According to the Russian negotiator, kyiv wants Moscow to commit not to oppose Ukraine’s accession to the European Union.

Turkish Foreign Minister Mevlüt Çavusoglu hailed the “most significant progress” since the start of the war, saying the talks they would not resume on Wednesday.

“Henceforth, will correspond to the Ministers of Foreign Affairs of the two countries meet to resolve the most difficult issues”, he added, at the end of the discussions between the Russian and Ukrainian delegations.

According to Turkish media, the heads of the two delegations met face to face on the sidelines of the discussions.

Russian negotiator Medinski called the Ukrainian approach “constructive” and explained that Russia would “give him an answer.” According to him, a possible agreement would be signed by the heads of diplomacy of the two countries, in the presence of Putin and Zelensky.

Arakhamia considered that the conditions were now “sufficient” for a summit meeting between the two heads of state.

The Russian negotiator recalled that, according to him, a meeting between Zelensky and Putin, as well as representatives of the guarantor states, would be possible in the event of an agreement to end hostilities.

“After the substantial discussion today (on Tuesday), we have agreed and we propose that the meeting be held to sign the agreement,” he said. “As long as we work quickly on the agreement and find the necessary compromises, the possibility of concluding peace will come closer,” Medinski said.

The Ukrainian president fears that France and Germany will want to ease sanctions on Russia if Putin agrees not to take more territory.

“We are going to judge Putin by his actions and not by his words. We want nothing more than a complete withdrawal of Russian forces,” warned the Prime Minister of the British government.

After the conversation with President Joe Biden, France and Germany, Boris Johnson said that “Putin is twisting the knife in an attempt to force the country and its allies to capitulate”. He wants to send more lethal weapons to Ukraine.

Boris Johnson said that Russia is strengthening eastern Ukraine with at least 1,000 Wagner mercenaries, formed by the special forces or former members of them. For Great Britain, the war is far from over yet.