Volodimir Zelenski, the leader who knows how to hit where it hurts the most 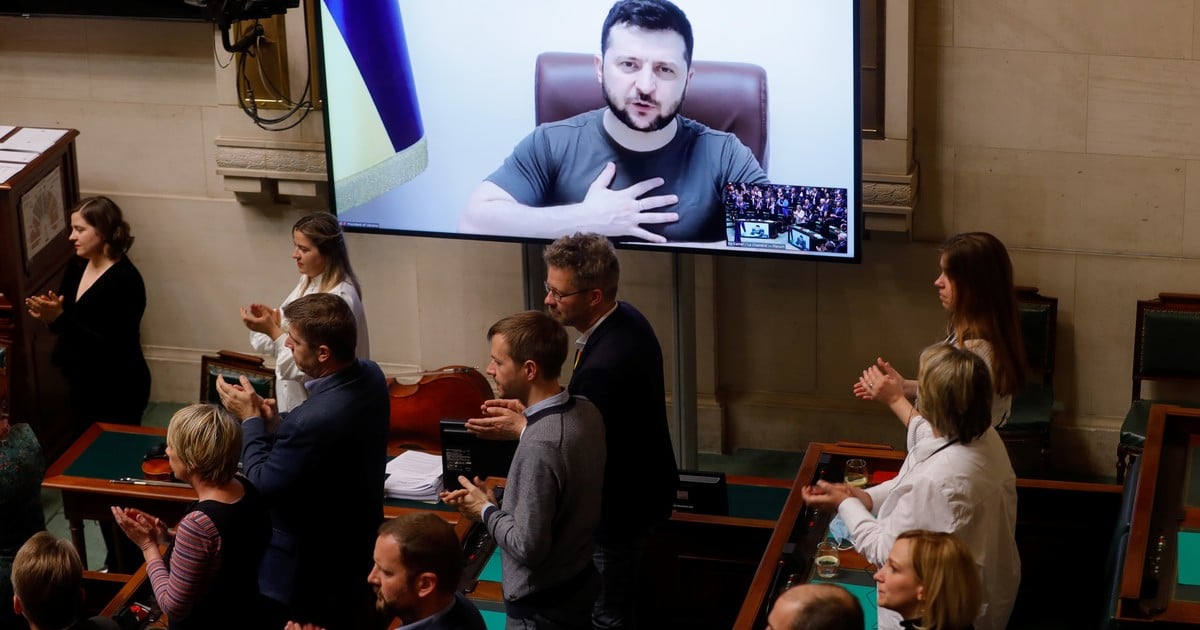 Volodimir Zelenski, President of Ukraine, has intervened in recent weeks in the plenary sessions of various parliaments, from the US Congress to the French National Assembly, passing through the British House of Commons and the German Bundestag.

His speech to the European Parliament brought MEPs to their feet and brought tears to the eyes of many. Zelensky usually speaks to them in Ukrainian and in these parliaments his speeches are translated.

the president of ukraine ask for military and financial aid and he knows where to give according to his audience, which messages and which historical references will have the most effect. Or as a European diplomat puts it, he “hits where it hurts the most”.

Zelensky refers to painful or heroic moments in the countries to which he speaks. He does not maintain the same speech, adapts it according to who listens and he is being effective in maintaining the European political focus on his country and in maintaining and tightening sanctions against Russia.

The US Congress listened as the Ukrainian president reminded them two traumatic moments, the two great attacks suffered by the United States in its territory.

President Volodimir Zelensky spoke via videoconference in front of the US Congress on March 16. Photo: AP

He made reference to the Japanese attack on the Pearl Harbor naval base (which led to the official entry of the United States into World War II) and the terrorist attacks of September 11, 2001.

French deputies and senators were reminded of the great battles of the First World War, such as Verdun, where France lost hundreds of thousands of young people.

But in his speech he also added that large French companies such as Auchan, Decathlon or Leroy-Merlin are reluctant to abandon their business in Russia. Zelensky told French deputies and senators that these companies “pay for the murder of children and women.”

He spoke to the British House of Commons about the resistance of the British against the Nazi aerial machine.

The Ukrainian leader repeated Winston Churchill’s famous 1940 speech: “We will fight at sea, we will fight in the air, we will protect our land. We will fight everywhere and we will not give up.”

Comparison with the Holocaust

To the Israelis of the Shoah, how the Russian bombers had destroyed one of the places where one of the biggest massacres of Jews of the Second World War is commemorated, on the outskirts of kyiv.

Israeli MPs, partly outraged by the comparison between the Holocaust and the deaths of Ukrainians at the hands of Russian troops, explained that Moscow wants to do with Ukraine the same thing that the Nazis wanted to do with the Jewish people: “They want the total destruction of our people.”

Zelensky also makes ugly behaviors he seeks to change. To the German deputies, in addition to talking about the Berlin Wall, he reproached them for Germany putting its economic interests in its relations with Russia ahead of European security and Ukrainian civilians.

He told them that Moscow is trying to build a wall in central Europe to divide the land of freedom from the land of serfdom and that Ukraine wants to be in the former.

And the Nazi crimes. Germany repeats every year that “never again” will mass crimes like those committed by Hitler’s regime take place in Europe. Zelensky told them that those words are worth nothing if they do not serve to prevent “a people from being destroyed in Europe.”

This Thursday he spoke before the Dutch Parliament. to their deputies asked them to stop trade with Russia nowreminded them of the Nazi bombing of Rotterdam in 1940 (they practically leveled the city) and the shooting down of the Malaysia Airlines plane, with more than 200 Dutch on board, by pro-Russian separatists in southeastern Ukraine in 2014.

Also on Thursday, Ukraine’s president told the Belgian Parliament that peace “is worth more than Russian diamonds.” European sanctions on Russia prohibit the export of luxury products to Moscow, but not the other way around. So Belgium’s Antwerp, world diamond capital, keep importing those gemstones from Russia in a trade that adds up to 1,800 million euros a year.

On Tuesday he will speak before the Spanish Congress of Deputies. The two political wings are already trying on clothes. The government of the socialist Pedro Sánchez could be reproached for the fact that its coalition partner, United We Can, is opposed to sending weapons to Ukraine (Madrid sends weapons anyway, following the agreements approved in the European Union and NATO).

Conservatives and the post-Franco ultra-right will not be very amused that it refers to when the Spanish Republic, faced with Franco’s coup d’état, was left to its own devices by the European democracies, who refused to hand over weapons thinking that delayed the start of World War II, which broke out just a month after the end of the Spanish Civil War.