The default and the surprise: behind the assassination of Putin’s senior generals 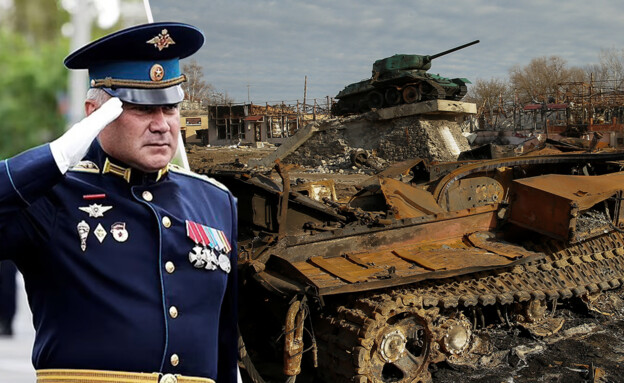 The Russian military convoy is moving slowly on the 95E highway, from Hustomal towards Kyiv. 30 kilometers north of the capital, the convoy was caught in a planned ambush: it first attacked the armored vehicles at an attacking UAV, and then squadrons of combatants armed with anti-tank missiles hit the convoy’s tail. Dozens of vehicles were destroyed but it soon became clear what the main target was.The attack on the convoy was intended to hit a command vehicle in which two Russian generals, commanders of divisions in the ground forces of the Russian army, were traveling. Camouflaged snipers waiting for the vehicles to arrive between the trees fired accurately, leaving the two senior Russian commanders no chance. Seven Russian generals were assassinated in this way or in similar ways by the Ukrainian army and it seems that this is not just a coincidence. How did the Ukrainians know about the position of the Russian officials?

While there are questions about the strength of the Russian army in many areas of the current war, there is no question about one thing – Russia is a power in the field of electronic warfare (LA). Awarded at least six LA brigades in the Ukrainian arena, but even after five weeks of fighting it is still unclear how successful this capability is for Putin’s army.

The fault in the field – which led to a fatal mistake

Contrary to early expectations, it turns out that the Russians are having a very hard time waging electronic warfare in the campaign – at least so far. Their communications systems suffered from low maintenance, power and battery problems mainly with the maneuvering forces, those that went deep into Ukraine – and the forces found themselves without real ability to communicate with their headquarters, mostly not through encrypted radios.

The Russian generals who fell in battle:

These mishaps forced them to switch to talking on the private cell phones they brought from home – and that was also what exposed them to the enemy. The Ukrainian military, which has received tracking and locating systems from the U.S. military, has been able to monitor these calls and the location of senior commanders and thus place ambushes on them and damage the command avenue and significantly disrupt the fighting and command capability of the Russian military.

Pictures circulated on social media showed civilian handheld radios, apparently made in China, associated with Russian soldiers. Although Russian paratrooper units are equipped with encrypted radios, other combat units are forced to use civilian radios and cell phones. It is clear that these radios are not at the forefront of military communications technology: the use of such basic technology by Russian front units raises some interesting questions about the state of the Russian military’s tactical communications.

The use of such devices by Russian forces may explain the low effectiveness of the operation of the PLO – because such a move could harm the Russian and Russian maneuvering forces. The current one in which inappropriate communication is used – it is quite clear that activating LA to a significant extent will disrupt Russian maneuverability.

But it is possible that the impairment of Russian efficiency in the PLO was due to another reason. , To produce targets for the entire SLA array and to operate under the units efficiently. This creates a situation where such a “power multiplier” moves in small convoys after the combat forces along with the logistical forces, and without the ability to operate.

The “treasure” that the Ukrainians found in the area

The main system of the Russian army for harming cellular networks is Leer-3. The level of use of this system is not clear, but it seems to have had little effect so far. It is possible that the commanders of the electronic warfare system of the Russian army want to leave the cellular coverage uninterrupted, in order to take advantage of the use of telephones for listening and producing intelligence from enemy transmissions. However, given the fact that cell phones are effective in aiding in the organization of resistance within Ukraine, it is difficult to understand why the military left the cellular network and did not attack it. Experts in the West estimate that Russian disruption technology is not as efficient as previously thought: as far as is known, the Russian system is more efficient in 2nd generation but much less so in 3rd and 4th generation.

Last week, the Ukrainians managed to get their hands on a real treasure. Army forces seized in one of the forests, not far from Kiev, containers loaded on trucks of the advanced and secret “Kroska-4” mobile electronic warfare system. This system, which the West very much wanted to get its hands on and is considered the most advanced of its kind, can disrupt radars, on the ground and also in American warning planes, and even impair satellite operation.

The loss of the Kroska-4 system may be dramatic for Russian forces from an operational point of view. It is one of the best mobile electronic warfare systems of the Russian military, developed as part of a larger project for field systems for the protection of Russian assets on the ground and in the air. This system knows how to interfere with the operation of various ground and aerial radars of surveillance and guidance of missiles and other munitions launched from aircraft, along with satellites equipped with radar for intelligence gathering. And has the ability to perform electronic blocking for a range of about 300 miles.

The placement of the Kruska-4 system in the vicinity of Kyiv is intended to make it harder for Ukrainian forces, and their international partners, to find by Russian radar units in this area – where fighting has been going on for weeks. Foreign manned and unmanned aerial vehicles operated by NATO along the borders of Ukraine.

The capture of the “Kruska 4” is a significant source of intelligence for Ukraine and its foreign partners. Intelligence agencies in the United States and other Western countries will no doubt be happy to get their hands on this system to see what can be gleaned from it. Achieving the sophisticated system will enable the development of countermeasures in the West and discover important loopholes in the system that will be used for the purpose of cyber warfare.

The fifth and sixth week of the war – N12 coverage:

On February 25, close to the invasion, an anonymous American defense source was quoted as saying on CNBC: “We believe the Russians did not use the full range of their electronic warfare capabilities, and it is not clear exactly why.” This assessment is still valid today: the civilian space in Ukraine did not suffer, as assessed in the West, by the Russian military.

If the screen is not damaged – what about the battles in the air?

An essential electronic warfare arena is air combat: communications disruptions, radars and navigation barriers are a significant component on the way to creating air superiority. Hours, so it seems that the Russian non-Russian systems fail to disrupt their activities, even though the Russians have impressive systems like the “Kruska 4”.

This system has been stationed for several years at a Habayim base in Syria and is used by Russian forces operating in the region by disrupting the operation of radars and planes. In order to overcome the difficulty and the disruptions, the operation of the system also disrupted the absorption of “Yes” in homes in Israel and damaged the civilian traffic of passenger planes that landed at Ben Gurion Airport. The experts in electronic warfare in Israel are very interested in this system, and perhaps they will get access to the Kruska 4 captured by Ukraine.

Russia often uses satellite navigation disruptions. The Russians only disrupt the American GPS and do not disrupt the counterparts from Russia and China, which use the weapons of the Russian army. So far, Russia has strangely used its electronic warfare systems – and only sparingly: this may be due in part to fears of the loss or capture of these systems.

Since the fall of the Soviet Union, independent Ukraine has long proven itself as a valuable source of Soviet hardware for the U.S. military and the U.S. intelligence community. This sheds a lot of light on advanced systems, including fighter jets and large radars, as well as on anti-aircraft batteries manufactured in Russia and used by the Ukrainian army. According to reports, the US government is currently in the process of sending Soviet-era air defense systems from its reservoirs to the Ukrainian army, to help strengthen its ability to prevent Russian forces from gaining control of the country’s skies.

Whether as a direct part of the same deal or through separate arrangements, the United States has been looking to obtain various examples of more modern Russian weapons and other military equipment seized during combat. This war may produce a huge treasure trove of intelligence for the U.S. government and others.

The campaign in Ukraine raises many questions about Russia’s true capability, including in the field of electronic warfare, and many wonder if Russian army commanders have now changed the doctrine of using the LLA. This power.