“Al Koki”: The war on the mobster who runs Venezuela 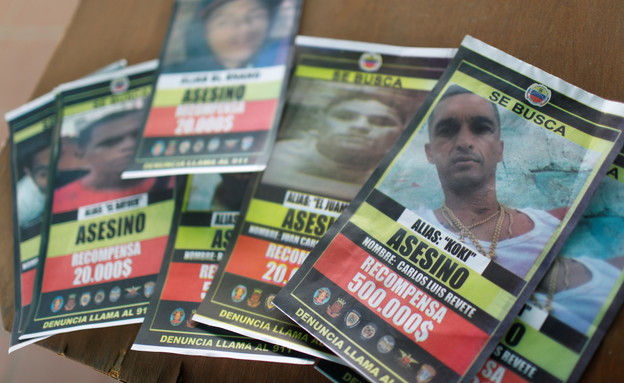 For the 300,000 inhabitants of Cote 905, a poor and hard.working suburb of the capital Caracas, the most powerful man in Venezuela is not President Nicholas Maduro. For many – there, in the capital and in the country in general – the most authoritative and threatening figure is actually the dubious mobster “Al Koki”.

Carlos Luis Rabata, the leader of the largest gang in a crumbling country, has greatly increased his power in recent years, amid its social and economic collapse. He accumulated most of his wealth and money from kidnappings and extortion of sponsorship fees in and around the capital. Since 2015, the 43.year.old mobster has turned large parts of the city into his private district – even at a particularly short distance from the presidential palace. El Koki established his crime empire shortly after the death of former President Chavez, at a time when Caracas was considered the “crime capital of the world” – with a shocking figure that on average 5 people were abducted every day.

President Nicholas Maduro’s government is having a hard time dealing with the “Al Koki” gang, and according to many has even ignored it and let it act as it wishes for a long time. The main activity of the government has been concentrated in recent years in the severe crisis in Venezuela, in fact since Chavez’s death in 2013. Beyond the deep social and economic crisis, the government is also busy with the political struggle against its opponents – led by opposition leader Juan Guiado –

Despite the criticism, in recent weeks the Venezuelan government has stepped up the fight against the El Koki gang, and has started distributing posters with prizes of up to half a million dollars for information that will lead to the arrest of the cruel leader. As part of police efforts to restrict gang activity, it entered areas considered its private territory and sought to arrest its operatives – an activity that led to violent clashes and the deaths of dozens of people, including innocent people who were not involved in the battles themselves.

In posters scattered by police, “Al Koki” is seen looking at the camera, with a military haircut and three gold necklaces around his neck. The poster reads his real name, the prize offered for information about him and the word “killer” in large and prominent letters. Among other things, the poster also features the logos of the special forces units in Venezuela, which are taking part in the struggle for its capture.

The most violent operation to stop the wanted mobster took place last month, when more than 800 security personnel broke into Kota 905, the stronghold of the Al Koki gang. During the operation, about 50 people were killed and a local nightclub that was considered especially popular by the gang members and its leader was set on fire. For two full days all roads to the area were closed, including one of the roads leading to the airport in the capital. According to many eyewitnesses, the place became a “battlefield”, and many were arrested – including one of the senior women in a gang with the nickname “Hair”, which is considered particularly close to “Al Koki”, who actually managed to escape from the place.

This week, according to neighboring Colombian police, El Koki left Venezuela. It is estimated that he is currently hiding in a local border town, and intelligence officials in Venezuela and Colombia are raising the possibility that he is a member of other mafia officials operating in the area and mainly engaged in money laundering and drug smuggling.

Venezuela – a country in collapse

“Al Koki” is probably the mobster who enjoys most of all the severe crisis in which his country finds itself. Against the background of the economic crash, with inflation reaching more than 2,000%, he managed to gain the sympathy of many citizens – against the background of what was perceived as a lack of support from Maduro’s government. Just last week, the decision was made to devalue the currency and “remove” 6 zeros from its value – which will bring the value of a million.dollar bill to only 1 dollar.

Venezuela’s precarious economic situation has also been severely damaged by the harsh sanctions imposed on it by the US, even during the Trump administration, as well as by other countries in the West – against the background of what they saw as election fraud with Maduro’s victory in January 2019. Sanctions on the country’s oil industry – considered one of the largest oil reserves in the world Despite the sanctions, the military and security forces have remained loyal to the central government in Caracas.

The operation to eliminate the power of “El Koki” and other gangs across the capital has become a top target for the government, which is desperate to raise its public prestige slightly due to the severe crisis and the rampage of the Corona plague. “El Koki has become the de facto government in the areas it controls,” said Javier Majorca, a Venezuelan organized crime expert. “Since 2019, you have not been able to do any action in Kota 905 and other areas without obtaining the express permission to do so from it.“

According to other experts, the corona plague was the “breaking point” for El Koki’s gang. First, the reputation of the mobster, who was perceived as a popular figure by many in the population, was damaged when a large party of members of his gang was reported – precisely at the height of the closure. In addition, the plague that also hurt El Koki’s profits led him to try and greatly expand his spheres of influence – forcing the government to take strong and powerful action against him. Mallorca is convinced that El Koki will continue to take advantage of Venezuela’s collapse for his personal well.being and enrichment: “This is where he has always felt most comfortable.“