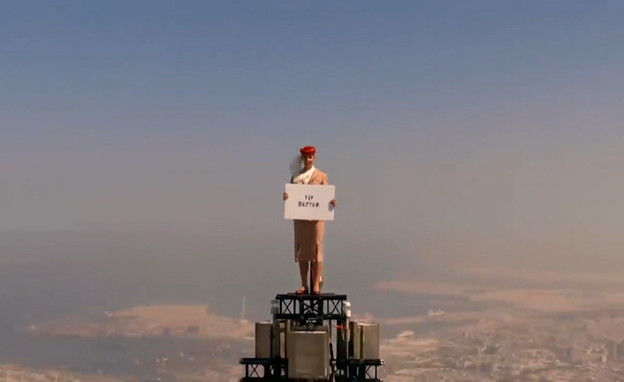 In recent days, a video has flooded the network in which an extreme athlete is photographed in a flight attendant’s uniform holding signs and advertising Dubai as a destination that has been reopened to the British. And this while standing on no less than the top of the mast of the tallest tower in the world – the Burj Khalifa.

The question of whether these were effects shot in a studio or computer graphics was very quickly answered unequivocally – no green screen was here. Nicole Smith.Ludwig trained for a long time on the operation as it was hitched to a special stand and secured with the help of many cables. According to some reports, the producers waited for the day with very few winds, as the burge is known to sway quite a bit – and it was a shame to take a risk.

“Hey mom, I’m at the top of the world,” Ludwig told the camera while filming the video. “You are currently the tallest person in the world,” she was told with a grin by the people who were by her side in the commercial.

After climbing an hour from the 160th floor with all the equipment they came upstairs and took pictures with the help of a helicopter. Nicole was indeed, for a brief moment, the man who stands tallest in the world above an artificial structure. Meanwhile, Emirates is celebrating the removal of the Emirates from the list of England’s red countries and the entry of the video into the list of all.time stunt records.